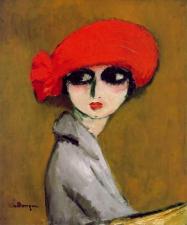 Kees van Dongen (1877-1968), born in Holland and a naturalized Frenchman, began his career as a Fauvist painter, later acquiring a reputation as a portraitist and socialite.

Cornelis Theodorus Marie ("Kees") van Dongen was born at Delfshaven, a suburb of Rotterdam, on January 26, 1877. Showing early artistic promise, he enrolled at the Académie des Beaux-Arts of Rotterdam in 1892. During his four-year course of study there he became acquainted with the Dutch old-master tradition as well as with the then-current Impressionist painting. He also contributed sketches to the newspaper Rotterdam Nieuwsblad, the first of many illustrations in his long career.

Encouraged by his friend and compatriot Siebe Ten Cate, van Dongen visited Paris in 1897 and found it so to his liking that late in 1899 he settled permanently in France. Shortly thereafter, he married a fellow painter, Augusta Preitinger, whom he had met at the Rotterdam Academy. Van Dongen's primary source of financial support was the illustrations he did for a variety of publications, including Le Rire, Gil Blas, and La Revue Blanche. One issue of the left-wing review Assiette au Beurre (the Butter Dish) concerning the moralizing tale of a prostitute's demise was illustrated entirely by van Dongen and contrasted with his frequent exaltation of the demimonde. At this point van Dongen was assimilating many artistic influences and was on the threshold of a full-bodied style that would align him with the Fauve painters.

In 1904 van Dongen exhibited some 100 works at the gallery of Ambroise Vollard, a champion of avant-garde art. The catalogue of the show was introduced by the progressive art theorist and critic Félix Fénéon. Van Dongen's neo-Impressionist style of bold color patches and a flattened depth linked him with such artists as Andre Derain and Maurice de Vlaminck and their anti-naturalist palette. In 1905, the same year in which his daughter "Dolly" was born, van Dongen showed pictures at the Salon des Indépendants and Salon d'Automne alongside a loose collection of like-minded painters of which Matisse was the ringleader. The riot of color in their work caused a somewhat hostile critic, Louis Vauxcelles, to dub these artists "les fauves" ("the wild beasts").

The Fauvists were never an alliance with a strict manifesto. Instead, they found themselves united by their interest in intense, unmodulated chromatics, a shallow pictorial space, and a joie de vivre. While often referred to as the first significant movement of 20th-century art, the style represented the culmination of aesthetic ideas begun in the 1890s. The untempered color zones of Femme Fatale (1905), a typical Fauve painting by van Dongen, bear a striking resemblance to Matisse's The Green Line of the same year.

By 1907 the Fauvists began dispersing to explore new directions. However, van Dongen, who had arrived at the style independently of the others, retained much of his Fauvist intensity for the duration of his career. In 1908 he exhibited with the German Expressionist group Die Brücke and affected some of its members' styles. Two years before he had found lodging in the famed "Bateau-Lavoir" ("the laundry barge"), the name coined by the poet Max Jacob for the seedy Montmartre tenement whose most celebrated resident was Pablo Picasso. Picasso and van Dongen became fast friends, and van Dongen painted Picasso's mistress, Fernande Olivier. Thrust into this fertile artistic and literary milieu, van Dongen cultivated a carefree bohemian image typified by his comment: "I've always played. Painting is nothing but a game."

In response to Picasso's example, van Dongen's subjects during this time were often circus people. His unflattering images of burlesque performers and prostitutes also recall Toulouse-Lautrec's candid perspective. One well-known painting by van Dongen, Modjesko, Soprano Singer (1908), uses a hot Fauve palette to depict the mocking, exaggerated image of a female impersonator. In 1913 van Dongen visited Egypt, and the ancient monuments he saw contributed to an increasing decorativeness in his own art. Also, around this time van Dongen acquired a reputation as a socialite, hosting a masquerade party at this home, now in Montparnasse, that was the talk of fashionable Paris in 1914. His licentious nudes and erotic subjects caused a stir among critics and admirers alike.

Van Dongen's connections with the rich and famous led him to chronical the Age des Folles ("Crazy Age") and its excessive habits. His portraits of the time range from the world-weary garçonne to well-known figures such as Anatole France. His painting of the latter in 1921, representing the literary giant as a feeble old man, scandalized the public. He painted outdoor scenes as well, capturing the spirit of Deauville, the Côte d'Azur, Paris, and Venice.

From 1917 to 1927 van Dongen formed a liaison with Jasmy Jacob, who managed a haute couture house. He seemed as much a participant in as an observer of the fastpaced Roaring Twenties, yet claimed to maintain aesthetic distance: "I very much like being as they say, the painter of elegance and fashion! But I am not, as many wish to believe, a victim of snobbism, of luxury, of the world." But in 1927 van Dongen wrote a biography of Rembrandt that proved to be a largely autobiographical account of a painter encumbered by his own fame. Two years later van Dongen, who had so successfully captured French society in his art, became a French citizen.

With the economic crash of 1929 van Dongen's artistic fortunes, so dependent on a prosperous society, suffered a temporary setback. Yet he continued to garner significant portrait commissions in the 1930s, including that of the Aga Khan and King Leopold III of Belgium. In 1938 he met Marie-Claire Huguen, who bore him a son, Jean Marie, in 1940. They finally married in 1953, and this second family gave van Dongen new purpose. He complemented his work as a portraitist with a steady stream of book illustrations, including writings by Mardrus, Kipling, Montherlant, Proust, Voltaire, Gide, and Baudelaire.

Kees van Dongen died on May 28, 1968, at the age of 91. In the waning years of his life, spent in Monaco, he was honored by frequent museum retrospectives. Until almost the end he sustained what Apollinaire called his blend of "opium, ambergris, and eroticism, " the fluid touch and exuberance that were his trademark whether he painted landscapes, nudes, or portraits.

A good introduction to van Dongen is Gaston Diehl, Van Dongen (translated by Stephanie Winston, 1969). Dennis Sutton, Cornelis Theodorus Marie van Dongen (1971) is the informative catalogue of the artist's first U.S. retrospective. An excellent critical study of Fauvism (including van Dongen's role) is John Elderfield, The Wild Beasts: Fauvism and Its Affinities (1976). Louis Chaumeil, Van Dongen: L'Homme et L'Artiste—La Vie et L'Oeuvre (1967, in French) is the most comprehensive review of the artist's work, with over 200 illustrations. Jean Melas-Kyriazi, Van Dongen Après Le Fauvisme (1976, in French) attempts with mixed results to examine the artist's post-Fauve legacy. Certain erroneous biographical details crop up in much of the literature due to van Dongen's efforts to fabricate events in his life. □