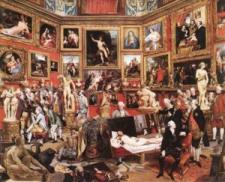 oxford
views updated
Zoffany, Johann (c.1733–1810). Painter of portraits, conversation pieces, and theatrical scenes, Zoffany was born in Germany and came to England about 1758 after studying in Italy. He began by painting clock faces and doing hack work, before turning to painting theatrical scenes, especially depicting David Garrick. He was favoured by the royal family. George III nominated him for the Royal Academy in 1769 and recommended him to the duke of Tuscany. He worked in Italy from 1772 to 1779, later going to India where he made a fortune painting English colonials and Indian princes. He returned to England in 1789 but painted little after 1800. His work is of particular interest to historians for its great attention to detail.

John Constable , CONSTABLE, JOHN (1776–1837), English painter. Along with J. M. W. Turner (1775–1851), the most celebrated landscape painter of his day, John Constabl… Angelica Kauffmann , Kauffmann, Angelica (1741–1807) Kauffmann, Angelica (1741–1807) Swiss artist who achieved fame and fortune in portraiture and the hitherto male domai… Gustave Courbet , COURBET, GUSTAVE COURBET, GUSTAVE (1819–1877), French painter. Born in Ornans, a small village in the Jura Mountains of France, Jean Desiré Gustave C… William Sidney Mount , William Sidney Mount (1807-1868), one of America's first and best anecdotal painters, portrayed rural life on Long Island. William Sidney Mount was b… Asher Brown Durand , The American painter and engraver Asher Brown Durand (1796-1886) was a prominent figure in the first generation of the Hudson River school of painter… Piero Di Cosimo , Italian painter. Born in Florence, where he lived his entire life, he trained in the workshop of Cosimo Rosselli, whose name he took as his own (his…