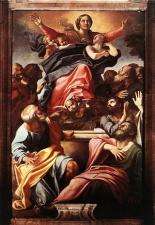 The Italian painters and engravers Ludovico (1555-1619), Agostino (1557-1602), and Annibale (1560-1609) Carracci opposed the style of late mannerist painting and sought instead classically inspired realism. The style they created is called baroque classicism.

What the Carracci urged was a change from the artificial, antinaturalistic style then in vogue and a return to the realism, the richness, and in some cases the monumentality of the High Renaissance. This meant turning to examples of the work not only of Raphael, as is sometimes supposed, but of Titian, Correggio, and Michelangelo as well.

The movement began in Bologna. There is no doubt that Ludovico was the leader in the beginning. For a time he shared a studio with his cousins, the brothers Agostino and Annibale. Together they founded an art school or academy (the Accademia degli Incamminati) where their artistic principles were so convincing and their example so persuasive that they determined the course of Bolognese art throughout the following century.

Ludovico, who was baptized in Bologna on April 21, 1555, and remained there all his life, is most closely related to the northern Italian tradition. His Madonna of the Scalzi (ca. 1593), generally considered his masterpiece, takes both St. Jerome and the Christ Child from Correggio's Madonna of St. Jerome and the facial type of the Virgin from Veronese. In the interrelationship of the figures, however, we find a new intimacy that will come to be associated with the baroque. This intimacy is still more marked in the Holy Family with St. Francis (1591), where passages of deep color and white highlights in the Venetian manner are used in combination with unexpectedly deep shadows to create an effect that is still closer to pure baroque. Ludovico died in Bologna on Nov. 3, 1619.

Agostino, who was baptized in Bologna on Aug. 16, 1557, is best known for his engravings. His most famous painting, the Last Communion of St. Jerome (ca. 1592), served as an inspiration for works by Domenichino and Peter Paul Rubens. Agostino was also a theoretician and a fine teacher, and he trained some of the better-known graduates of the Carracci school. He was working on the frescoes in the Palazzo del Giardino in Parma when he died on Feb. 23, 1602.

Annibale, born in Bologna on Nov. 3, 1560, was the genius of the family, but he was slow to develop. His Virgin with St. John and St. Catherine (1593) repeats a whole series of High Renaissance formulas. The Madonna sits on a high throne with a saint on either side; together they form a symmetrical triangle. In the background a central niche and flanking columns provide tectonic stability. The gentle turning of the saints' bodies supplies just enough movement to loosen the composition a little. The pose of the Christ Child comes from Raphael, the relief on the pedestal from Correggio, and the facial types from Veronese. Paintings such as this, which are typical of Annibale's activity in Bologna, tell us much about his classicism but little about his originality.

In Rome, where he moved in 1595, Annibale's works took on a new inventiveness and monumentality. Under the impact of his intensive study of ancient sculpture and Raphael's frescoes his style became harder and tighter. At the same time he brought his figures close to the surface of the painting so as to give them immediacy and largeness of scale. In his Domine, quo vadis? (ca. 1600) Christ appears as a powerful, seminude athlete. With the cross borne lightly on his shoulder, he strides forward past an amazed St. Peter and on toward us as if he were about to break out of the canvas. Annibale's pictures are now filled with classical details, such as columns and temples, and his figures are rich in dignity. But there is also a preference for strong movement and a new sense of drama that belongs to the new age. Works such as this, which fuse two diverse stylistic currents, are apt examples of baroque classicism.

Annibale's masterpiece is in the Palazzo Farnese in Rome. He covered the ceiling of the great gallery with frescoes (1597-1604) that imitate framed easel paintings, bronze reliefs, marble statues, entablatures, balustrades, fruits, flowers, ox skulls, shells, masks—all crowding and overlapping one another in a kaleidoscopic display of lavishness that has few, if any, equals. Individual scenes, drawn from Greek and Roman mythology, are filled with the exuberant rhythms of Hellenistic sculpture. Many artists of the high baroque, among them Gian Lorenzo Bernini, Rubens, and Pietro da Cortona, turned for inspiration to this famous monument of 17th-century classicism.

Annibale's classicism is equally apparent in his landscapes. In his Flight into Egypt (ca. 1603) nothing is accidental. The eye is carried back into space along planes parallel to the surface. These are joined by connecting diagonals. A cluster of low stone buildings at the center of the picture intensifies the painting's underlying geometry. This is not ordinary nature but what is called paysage composé, or classical landscape, in which nature is shaped and modified by the hand and mind of man. Annibale's bold new concept of nature underlies the elaborations of Nicolas Poussin, which in turn provided a springboard for Camille Corot and Paul Cézanne.

In the last years of his life Annibale suffered a nervous collapse and, in the words of Bellori (1672), "was compelled to leave aside the brushes that melancholy had taken from his fingers." He must have suffered deeply, for his art was his whole life. "He was never avaricious or mean in regard to money," Bellori wrote. "Indeed, he appreciated it too little and kept it openly in his painting box so that anyone could dig their hand in it at will. He despised ostentation in people as well as in painting and sought the company of plain, ambitionless men. Thus he used to live shut up in his rooms with his pupils, spending hours at painting, which he was wont to call his lady." Annibale died in Rome on July 15, 1609.

Peter Paul Rubens , Rubens, Peter Paul Siegen, Westphalia, Germany May 30, 1640 Antwerp, Belgium Painter, diplomat "My talent is such that no enterprise, however vast in… Carpaccio, Vittore , Carpaccio, Vittore (ca. 1460–1525) The painter Vittore Carpaccio was born into a humble family of seafarers and fishermen and lived his entire life i… Hieronymus Bosch , The work of the Netherlandish painter Hieronymus Bosch (1453-1516) is characterized by unusual stylistic originality and an intensely personalized sy… Jan Vermeer , The Dutch painter Jan Vermeer (1632-1675) of Delft transformed traditional Dutch themes into images of superlative poise and serenity, rich with embl… Lippi , Lippi Lippi (lēp´pē), name of two celebrated Italian painters of the 15th cent., Fra Filippo Lippi and his son, Filippino Lippi. Fra Filippo Lippi Fr… Guercino , The Italian painter Guercino (1591-1666) was probably the first Italian artist to create works that can be called fully baroque in the stylistic sens…