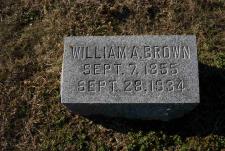 British psychologist, psychiatrist, and psychic researcher. Brown was born December 5, 1881, at Morpeth, England. He studied at Collyer's School in Horsham and at King's College Hospital, London (D.Sc., M.R.C.P., F.R.C.B.). He was consulting psychologist and a reader in psychology at the University of London as well as King's College Hospital. He gave the Terry lectures at Yale University in 1928; in 1936 he became director of the Institute of Experimental Psychology at Oxford University, where he remained until his retirement in 1945. In 1951-52 he was president of the British Psychological Society.

Brown's interest in psychic research began early. He joined the Society for Psychical Research and served on its board for 17 years (1923-40). While on the board, he wrote two letters to the Times (London) (May 7 & 14, 1932) in which he spoke appreciatively if guardedly of medium Rudi Schneider 's powers and declared that they were worthy of the closest scientific investigation. In a lecture delivered during the jubilee celebrations of the Society of Psychical Research, London, he reviewed the evidence collected and examined by the society and declared that it was "sufficient to make survival scientifically extremely probable."

——. Mind, Medicine, and Metaphysics; The Philosohy of a Physician. London: Oxford University Press, 1936.