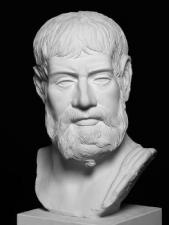 oxford
views updated
Babrius a Greek writer of fables who lived probably in the second century ad but about whom nothing is known. The fables, which exist today in two books (of which the second is incomplete), are based on the fables of Aesop with some apparently original additions.

Archosauria , Archosauria (class Reptilia) A subclass of diapsid reptiles that includes the orders Crocodilia, Ornithischia, Saurischia, Pterosauria, and Thecodont… Aurora (mythology) , Aurora In Roman mythology, the goddess of dawn, equivalent to the Greek goddess Eos. Western Drama , c. 550 BC The art of drama developed in the ancient Greek city-state of Athens in the late sixth century BC From the religious chants honoring Dionys… Nothing , "Nothing" is an awe-inspiring yet essentially undigested concept, highly esteemed by writers of a mystical or existentialist tendency, but by most ot… Iliad , Nationality/Culture Pronunciation Alternate Names Appears In The Iliad Myth Overview One of the greatest epics of ancient Greece, the Iliad tells of… Hellen , Hellene •gradine • sanidine •codeine, Roedean •undine • iodine •Aberdeen, gaberdine •almandine • grenadine • Geraldine •caffeine • Delphine • Josephi…