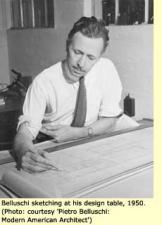 oxford
views updated
Belluschi, Pietro (1899–1994). Italian-born architect and engineer, he settled in the USA in the 1920s, and joined the Portland, OR, office of the architect Albert Ernest Doyle (1877–1928) in 1925, which he reorganized under his own name in 1943. In the 1930s Belluschi established his architectural reputation with several commercial, domestic, and religious buildings, among which the Art Museum (1931–8), Finley Mortuary (1936–7), Sutor House (1937–8), and Church of St Thomas More (1939–41), all in Portland, should be mentioned. With his US National Bank of Oregon, Salem (1940–1), he showed an inclination to International Modernism, a tendency reinforced with his Equitable Life Assurance Building, Portland (1944–8), one of the first examples of an aluminium-and-glass curtainwall enclosing a concrete-framed tower, a building-type that became very common thereafter. From 1951 he was appointed Dean of the School of Architecture and Planning at Massachusetts Institute of Technology (MIT), and his practice was absorbed by Skidmore, Owings, & Merrill (SOM). Fond of the phrase ‘eliminate, refine, and integrate’, he had built up a huge commercial practice, and collaborated with others while involved at MIT, notably with Eduardo Catalano (1917– ) and Helge Westermann for the Juilliard School of Music and Alice Tully Hall at the Lincoln Center, New York (1955–70), with a travertine marble façade masking the buildings behind it. On relinquishing his position at MIT in 1965 he again established an architectural practice in Portland, often working with other architects. Among the laterworks are numerous churches, the San Francisco Symphony Hall, CA (with SOM–1980), and the Baltimore Symphony Hall, MD (with Jung, Brannen, Associates–1982).

Fumihiko Maki , Architect Fumihiko Maki (born 1928) came to prominence in the 1960s, a period of growth and vibrancy in Japanese architecture. Although still identif… Paul Marvin Rudolph , Paul Marvin Rudolph The American architect Paul Rudolph (born 1918) sought to integrate into modern architecture a spatial drama, a concern for urban… Frank Lloyd Wright , The American architect Frank Lloyd Wright (1869-1959) designed dramatically innovative buildings during a career of almost 70 years. His work establi… Modern Architecture , Through the nineteenth century and into the early twentieth century, neoclassical architecture predominated in much of Spanish America. In Europe, mo… Cesar Pelli , Cesar Pelli Acclaimed by the American Institute of Architects (AIA) in 1991 as one of the ten most influential living American architects, Cesar Pell… Cass Gilbert , GILBERT, CASS Cass Gilbert was the U.S. architect responsible for the traditional style and regal proportions seen in many of the nation's finest pub…