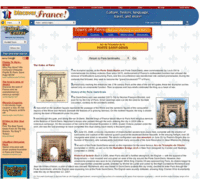 Blondel was the eldest son of François-Guillaume Blondel, master of petitions to the queen mother and king’s attorney at the bailiff’ court of vermandois, and of marie de louen. At seventeen he became an infantry cadet and fought against the Imperial forces in the Thirty year’ War. Between 1640 and 1652 he held a variety of positions, many of them in naval engineering. In July 1652 he became tutor to the son of Loménie de Brieene, secretary of state for foreign affairs, and spent the next three and a half years traveling through Europe with his pupil. Upon his return to Paris, Blondel succeeded Gassendias lecturer in mathematics at the Collège Royal (now the Collège de France). From 1657 to 1662 Loménie de Brienne entrusted him with several diplomatic missions: when his period of service was over, he became commissioner general of the navy.

As a member of a commission seeking a harbor for the navy between the Loire and the Gironde, Blondel recommended the site of what is now Rochefort. He directed construction for the region and drew up plans for the town and its fortifications, and for restoration of the Saintes bridge and the Romanarch. Construction was not far advanced when Colbert sent him to the West Indies in July 1666, to look for harbors, make maps, and plan fortifications. The maps he made of Grenada(1:98,000) and Tortuga (1:76,500) in 1667 are in the Bibliothèque Nationale.

From 1640 on, when he was in Paris, Blondel never failed to attend the meetings held regularly by the scholars of the capital prior to the founding of the Royal Academy of Sciences. When he was unable to be present, he relied on correspondence to convey his passionate interest in theoretical discussions of any kind. Thus in 12 August 1657, he wrote at great length to Paul Wurz, one of his Swedish friends, to the effect that Galileo had erred in his Discorsi e dimostrazioni matematiche with respect to beams of equal resistance. Actually, the text that he criticized applied correctly to beams fixed at one end only, i.e., to brackets.(Also, he was wrong to claim that in Galileo’s thinking beams resting on two supports were involved.)

In 1669 Colbert sponsored Blode’s admission to the Royal Academy of sciences as a geometer, which in his case meant topographer. In 1671 he was appointed professor at, and director of, the Royal Academy of Architecture, which had just been founded. From then on, he attended the regular meetings of the two academies, gave a course in mathematics at the College Royal, and delivered public lectures at the Royal College Architecture. His work increased in 1672, when Louis XIV put him in charge of public works for the city of Paris, and in 1673, when he was made mathematics tutor to the dauphin.

In the seventeenth century the profession of architect embraced subjects now considered a part of engineering. Blondel devoted part of his lectures at the Royal College of Architecture to geometry, arithmetic, mechanics, gnomonics, the art of fortification, and perspective and stereometry; but he did not feel it necessary to publish corresponding texts. In order to provide an architecture text, in 1673 he brought out a new edition, without the illustrations, of Louis Savot’s L’architecture françoise des bestimens particuliers (first published in 1624). In his Cours d architecture (1675–1683) he treated both decorative elements and such practical structures as bridges and aqueducts. He presented the concepts of the great architects since Vitruvius and shared the lessons he had learned from wide reading and many visits to most of the major monuments of antiquity, as well as his practical experience and his theories. The Cours, illustrated with many remarkable figures, remained the definitive reference work for French architects for more than a century.

While writing the portion of the Cours devoted to staircases, Blondel formulated the following rule, approved in 1675 by the Royal Academy of Architecture and still used today: “The length of the normal step of a man walking on level ground is two feet (Paris measure), and the distance between steps on a perpendicular ladder is one foot.” From this he deduced that a staircase is well-balanced when G+2H=two feet (G is the tread of a step and H is the height of a step). This is the origin of the rule of art approved 28 January 1675 by the Royal Academy of Architecture and applied universally ever since; thus it would be proper to call it Blondel’s rule.

In 1673, while editing his Cours, Blondel published the Reásolution des quatre principaux problemes d’architecture. The first problem concerns the sketching of columns; the second and the third, rampant arches. The fourth problem pertains to beams of equal resistance. Here Blondel reproduced his letter of 1657 addressed to Wurz, which he had printed in 1661, as well as his reply to a correspondent who had pointed out to him that his interpretation of Galile’s text was wrong. In his repay Blondel evinced an obstinacy worthy of a better cause and stuck to his criticism.

In 1676 Félibien, secretary of the Royal Academy of Architecture, published a work entitled Des principes de l’archidecture, de la sculpture, de la peinture et des autres arts qui en dependent; avec un dictionnaire des terms propres a chacun de ces arts which Blondel recommended to his architectural course. Felibien’s plates, remarkable in every respect, were to serve as models for the ones in the Description des arts et metries, which was commissioned by order of the king on 16 June 1675. In turn they became the prototypes of the plates in the Encyclopedie.

During his infantry service, Blondel had been amazed at the crude methods of the French bombardiers, In 1637, during the siege of Landrecies, he had made the acquaintance of the English engineer Maltus, whom Louis XIII had summoned from Holland to teach his army the use of the mortar. Since Maltus fired by guesswork and then proceeded to make corrections, his first bombs at Landrecies at times fell on Frenchmen. In 1642, at the siege of Collioure, by sheer luck he had he had destroyed the water supply of the beleaguered Spaniards, to surrender; thus he appeared to have made progress. In order to improve this method, Blondel scrutinized all the publications on the subject, going even to the extent of reading the two chapters on fireworks inserted in Volume III of the Cursus seu mundus mathematicus, by the Jesuit Milliet de Chales. Galileo, who had overlooked air resistance, had demonstrated that the trajectory assumed the from of a parabola. Torricelli had indicated that it was sufficient to make a test shot under a predetermined angle by measuring the range obtained with a given charge and that a range was a function of the sine of the double angles of inclination of the mortar over the horizontal. Blondel too considered air resistance a negligible factor. Bent on arriving at a rule easy to apply, he presented the problem to the Royal Academy of Sciences on 6 March 1677. Buot came up with a solution on 10 March, Roemer offered an even simpler one on 20 March, and on 27 March he proposed to adopt a scaled half-circle as a sighting instrument. Finally, Philippe de La Hire, who did not yet hold membership in the Academy, communicated a third solution through Cassini as intermediary. Blondel used the three solutions for establishing the practical rules which he formulated in his L’art de jetter les bombes, the printing of which was delayed until 1683 by order of Louis XIV, who hardly cared to have the enemy profit by it. The French gunners, however, paid no attention to it and continued to use faulty firing tables until 1731 and the publication of the treatise by Belidor, under the title Le bombardier francois, ou nouvelle methode de jetter les bombes avec precision.

oxford
views updated
Blondel, Nicolas-François (1617–86). French military engineer and mathematician, who became the first Director of the Royal Academy of Architecture and Ingénieur du Roi. His Cours d'Architecture (1675, 1683, and 1698) was an important architectural textbook in which the Orders were given prominence, and the principles of Classicism and a rational approach to architecture were promoted and explained. He did not design many buildings but was responsible for the huge monumental Parisian Portes, those of St-Antoine, St-Bernard, and St-Denis, all 1671.