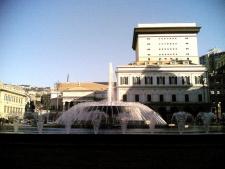 oxford
views updated
Fontana, Carlo (1638–1714). Italian Baroque architect. Born near Como, he lived in Rome from the early 1650s, and assisted Cortona, Rainaldi, and Bernini. For the last he worked on the design of the Piazza di San Pietro, the Scala Regia, and other projects, and was to succeed the master as architect of St Peter's in 1697. Fontana was a prolific architect, and his fame was based on the series of works starting in 1671: the Cappella Ginetti, Sant'Andrea della Valle, has a rich interior of coloured marble, and there were other chapels, but the Cappella Cibo, Santa Maria del Pòpolo (1682–4), is perhaps the finest of them. At the same time he built the concave façade of San Mar-cello al Corso. His remodelling of the Baptismal Chapel in St Peter's (1692–8) involved ingenious high-level lighting. He transformed and enlarged the Palazzo di Montecitorio (1694–6), left unfinished by Bernini, made additions to the Ospizio di San Michele (1700–11), and remodelled the façade and porch of Santa Maria in Trastévere (1702). Fontana also published books on St Peter's (1694), the Baptismal Chapel (1697), and other subjects. As the leading architect in Rome towards the end of his long life, he was highly influential, not least because he taught men of genius who carried his ideas far and wide: those pupils numbered among them Fischer von Erlach, Hildebrandt, and Gibbs.

Luigi Cadorna , Piacentini, Marcello (1881–1960). Italian architect, the son of Pio Piacentini (1846–1928), who was one of the leading architects in Rome in the firs… Giulio Romano , Giulio Romano (c.1499–1546). Italian architect, he was one of the major figures of the late Renaissance. Called Giulio Pippi or Giuliano Giannuzzi, h… Saint Peters Church , Saint Peter's Church, Vatican City, principal and one of the largest churches of the Christian world. The present structure was built mainly between… Domenico Fontana , Fontana, Domenico (1543–1607). Architect and engineer, born in the Ticino, Switzerland. He settled in Rome, where he worked for Cardinal Montalto, th… Saint Peter Canisius , Canisius, Peter, St (1521–97). Jesuit theologian and controversialist. His interest in education led him to publish, in 1555, the first of three cate… Carlo Maderno , Maderno, Carlo (c.1556–1629). Leading architect working in Rome from the mid-1570s, before Bernini, Borromini, and Cortona developed the Baroque styl…