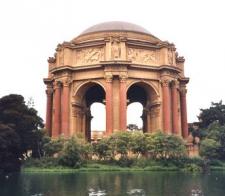 oxford
views updated
Maybeck, Bernard Ralph (1862–1957). American eclectic architect, he made a distinctive contribution to domestic design. Educated in Paris, he was influenced by Viollet-le-Duc's theories, and in 1886 returned to New York to work with Carrère & Hastings before setting up on his own (1902) in CA, where he worked mostly in the Stick style. In his First Church of Christ Scientist, Berkeley, CA (1910–12), he mixed Gothic, vernacular, the Stick style, and more than a hint of Japanese-inspired timber-work. His many houses had similar qualities, but at the A. C. Lawson House, Berkeley (1907), he also used reinforced concrete, an early example of this material. He employed Beaux-Arts Classicism too, notably in the Palace of Fine Arts, San Francisco (1913–15), built for the International Exposition.

Paolo Veronese , Paolo Veronese Paolo Veronese The Italian painter Paolo Veronese (1528-1588) was one of the greatest Venetian artists. His work is rich in invention… Sir Edwin Landseer Lutyens , Lutyens, Sir Edwin Landseer (1869–1944). English architect held by some as the greatest since Wren. He began his career in the office of George and P… William Burges , Burges, William (1827–81). London-born architect, one of the least restrained of the Gothic Revivalists, whose philosophy was strongly influenced by… Bertram Grosvenor Goodhue , Goodhue, Bertram Grosvenor (1869–1924). American architect. In partnership with Cram from 1892 to 1913, they designed All Saints' Church, Ashmont, MA… Arts And Crafts , The arts and crafts movement began in Britain in the 1850s as a reaction to what proponents saw as the consequences of rapid industrialization: worke… Art Deco , "BE MODERN" THE ART OF LIVING BIBLIOGRAPHY The term art deco originates from the 1925 International Exhibition of Modern Decorative and Industrial Ar…