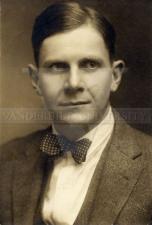 John Crowe Ransom (1888-1974), American poet, critic, and agrarian champion, was the center of the "Fugitive" group, of the Southern Agrarians, and of the New Critics.

John Crowe Ransom was born in Pulaski, Tennessee., on April 30, 1888. He received his bachelor of arts degree from Vanderbilt University in 1909. He was appointed a Rhodes scholar and was in residence at Christ Church, Oxford, from 1910 to 1913, earning a bachelor of arts degree. From 1914 to 1937 he was a member of the faculty at Vanderbilt, except for the World War I years, when he was a first lieutenant in the U.S. Army. In 1920 he married Robb Reavell; the couple had three children.

Vanderbilt and the Fugitives

As a young instructor at Vanderbilt, Ransom assembled a group of poets, calling themselves "Fugitives"; he created and edited the magazine for their expression, the Fugitive. They opposed both the traditional sentimentality of Southern writing and the increased pace of life that emerged during the war years and the early 1920s. Ransom's own poetry eventually appeared in the volumes Poems about God (1919), Chills and Fever (1924), Grace after Meat (1924), Two Gentlemen in Bonds (1927), and Selected Poems (1945, 1963). Ransom was much influenced by the ballad poetry of the romantic revival, though he totally altered it by irony and wit. His best-known poems are "Bells for John Whiteside's Daughter," "Captain Carpenter," and "The Equilibrists." He won the Bollingen Prize in 1951 and the National Book Award for his poetry in 1964.

With the beginning of the Great Depression, Ransom joined the intellectual group of southerners, centered on Vanderbilt, who felt that the South could escape the ills of the times by rejecting the technology and financial complexities "imposed" by the North and by returning to ante-bellum agrarianism. Their views found expression in two symposia, I'll Take My Stand (1930) and Who Owns America? (1936).

In 1937 Ransom became Carnegie professor of poetry at Kenyon College and there founded the Kenyon Review, which he edited until his retirement in 1958. He also founded the unit at Kenyon that became the Summer School of Letters at Indiana University. Ransom's leaving Nashville symbolized his achievement of a larger position in American literature. From the 1920s Ransom had mixed in the healthy discussions of criticism going on in the magazines, solidifying his position in God without Thunder (1930), The World's Body (1938), and The New Criticism (1941). He is given credit for applying the term "New Criticism" to the dedicated search for the intrinsic in poetry. In defining "New Criticism," Ransom and his fellow proponents contrasted their theory with romanticism's commitment to self expression and naturalism's deduction from fact as a basis of evaluating art. Instead, the New Critics looked upon art as an object in itself. They did not believe in outside influences such as the circumstances under which the art was created. Ransom's best-known essay on this subject is "Criticism as Pure Speculation," a lecture given at Princeton in 1940. Whether considered poet or critic, Ransom brought much to both fields through his teaching and writing. Ransom died on July 3, 1974 in Gambier, Ohio.

J. L. Stewart, John Crowe Ransom (1962), is the only study of the "whole man." Thomas Daniel Young, ed., John Crowe Ransom: Critical Essays and a Bibliography (1968), discusses Ransom as poet and critic. Ransom as poet is treated in Randall Jarrell, Poetry and the Age (1953). For information about the "Fugitives" see John M. Bradbury, The Fugitives: A Critical Account (1958), and Louise Cowan, The Fugitive Group: A Literary History (1959).