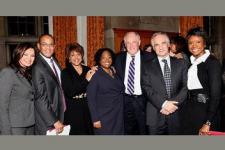 John Rogers (1829-1904) was the most successful genre sculptor of mid-19th century America. His plaster groups sold by the thousands.

John Rogers was born in Salem, Mass., and spent his early life as a clerk in New England, New York, and the Midwest. He began to model sculpture before the middle of the century. In 1858 he went first to Paris and then to Rome for training. The ideals of contemporary neoclassicism, as practiced by both American and European sculptors in Italy, did not inspire him, however, and he turned his back upon his sculptural pursuits when he returned to Chicago.

However, Rogers was persuaded to continue modeling small genre figures of a type he had done previously. Their success led him to open a studio in New York City in 1859. A combination of his sculptural ability and shrewd marketing practices quickly made that venture a success too. His work consisted of small, very detailed sculptures in plaster, built around a metal armature, and painted a neutral earth color. His grasp of anatomy and sharp observation of details of costumes and accessories were combined with an ability at compositional massing of figures and an appealing, sympathetic expressiveness. Some of his earliest works related to the Civil War, appealing to patriotism and to the popular sentiment against deprivation, the horrors of war, and slavery.

The majority of Rogers's sculptures featured scenes of everyday life—in the schoolhouse, at the parsonage, in the home, more often rural or small town. Among his more ambitious works were scenes taken from literature, including three sculptures from Washington Irving's Rip Van Winkle, some from Goethe's Faust, and a number of Shakespearean interpretations; even these stressed anecdotal rather than dramatic qualities. There were a few small portrait sculptures, too, of Abraham Lincoln, George Washington, and Henry Ward Beecher. As time went on, Rogers's compositions tended toward greater looseness, and he also depicted more scenes of action. In all, there were about 80 so-called Rogers Groups, of which about 80,000 plaster reproductions were made. Rogers developed a mail-order business, and his works were often purchased as wedding presents. They cost about $10 or $15 each.

Rogers also executed a number of monumental sculptures, but these are far less significant than his plaster groups. They represent one phase of the reaction to the popular idealistic marbles, although in the 1850s some neoclassic sculptors were also producing genre works. Rogers had numerous imitators, but none achieved his renown.