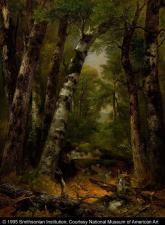 The American painter and engraver Asher Brown Durand (1796-1886) was a prominent figure in the first generation of the Hudson River school of painters.

Asher Durand was born on Aug. 21, 1796, in Jefferson Village, N.J., of a French Huguenot family. His first training was with his father, John Durand, a watchmaker. At 17 Asher was apprenticed to the engraver Peter Maverick and showed such facility that after 5 years they became partners. Durand also attended the American Academy of Fine Arts. When John Trumbull, who ran the academy, engaged Durand to engrave his painting The Declaration of Independence, Maverick, jealous of his former pupil, dissolved the partnership. Durand then set up his own establishment and was soon America's leading engraver. He engraved many portraits and book illustrations and executed a fine engraving of John Vanderlyn's Ariadne.

Although Durand had occasionally done some painting, he did not give up engraving in favor of painting until about 1834, when Luman Reed, a wealthy New York collector, commissioned him to do portraits of the early American presidents. In 1840 Durand traveled to Europe, where he admired the work of the 17th-century Dutch masters as well as Salvator Rosa and Claude Lorrain. Durand succeeded Samuel F. B. Morse as president of the National Academy of Design, New York, in 1846 and held the office until 1862, when he resigned.

Because Durand had been trained as an engraver, his earlier paintings are hard in texture and meticulous in detail, and his color is pale in tone. However, he soon developed a freer style and a richness of color. Two notable canvases, the Morning of Life and the Evening of Life, are allegories of the ages of man and depict imaginary landscapes in a rich and luxurious manner. But he was also a very factual painter. While most artists of the Hudson River school made sketches on the spot from which they worked up paintings in the studio, he was a pioneer in making actual paintings out of doors. As a result, his color is more true to nature than that used by his contemporaries. His Monument Mountain, Berkshires and numerous scenes done in the Catskills are remarkably fresh interpretations of the natural world.

In memory of his friend and fellow painter Thomas Cole, who died in 1848, Durand painted Kindred Spirits, showing Cole and the poet William Cullen Bryant standing on a cliff overlooking a Catskill stream. If overliterary in content, the painting does show the close association between writers and painters during the American romantic period.

Body Painting , Body Painting Across the continent of Africa, the skin was, and still is, regarded as a blank canvas to be decorated in a variety of different ways.… Frank Kupka , Frantisek Kupka (1871-1957) was a Czech painter and illustrator who lived most of his life in Paris. He was one of the first artists to paint abstrac… Thomas Eakins , Eakins, Thomas Philadelphia, Pennsylvania Died June 25, 1916 Philadelphia, Pennsylvania Painter A traveling exhibit of the major paintings of Thomas… Henry Ossawa Tanner , Tanner, Henry Ossawa 1859-1937 Painter, photographer At the beginning of the twentieth century, Henry Ossawa Tanner was highly regarded in Europe and… John Constable , CONSTABLE, JOHN (1776–1837), English painter. Along with J. M. W. Turner (1775–1851), the most celebrated landscape painter of his day, John Constabl… William Sidney Mount , William Sidney Mount (1807-1868), one of America's first and best anecdotal painters, portrayed rural life on Long Island. William Sidney Mount was b…