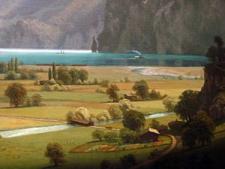 Albert Bierstadt (1830-1902) was the last of the older generation of American romantic landscape painters.

Albert Bierstadt, born in Solingen, near Düsseldorf, Germany, on Jan. 7, 1830, was brought to New Bedford, Mass., as a baby. At the age of 21 he determined to be a painter, and in 1853 he went to Düsseldorf to study. Bierstadt was trained to use a light, meticulous technique and drab coloring; as a result, his painting always tended to be rather stiff and dry. He returned to New Bedford in 1857, and the following year he went west on a surveying expedition. There Bierstadt first saw the scenic grandeur which would become the chief subject matter of his paintings.

With the opening of the West there was enormous popular interest in the romantic splendor of the mountain scenery, and Bierstadt came along at just the right time to make the most of the situation. He executed numerous small sketches on the spot, which he combined and rearranged in his studio to produce panoramas of large scale.

In his early paintings, such as the Bombardment of Fort Sumter, Bierstadt worked in a clear, luminous style which lent enchantment to the scene. His early sketches of the West, with their silvery light and poetic mood, marked the final flowering of the romantic style in American painting. His large canvases were ponderous and dry and too melodramatic. His colors became raw and the work lacked spontaneity. Yet in one canvas, Hetch Hetchie Canyon, done in the mid-1870s, he managed to combine the feeling of grandeur with a poetic mood and a magical light. He was tempted too often to overextend himself and, not being a painter of much intensity of feeling, was unable to sustain vitality when working on large scale. He loved publicity and was carried away by the uncritical enthusiasm of the general public rather than heeding the more carefully considered criticism of those who were better informed.

Although Bierstadt's sketches are fresher and more spontaneous, his huge canvases were eagerly sought and commanded prices from $5,000 to $35,000. His painting of Estes Park, Colo., executed for the 4th Earl of Dunraven, a noted game hunter in the Rockies, started a Bierstadt fad in Great Britain.

During his lifetime Bierstadt received many honors, and Congress purchased two of his paintings for the Capitol in Washington, D.C. He was decorated in Germany and Austria, and in France he was made a chevalier of the Légion d'Honneur. He became a member of the National Academy of Design in New York in 1860.

Bierstadt's considerable wealth enabled him to build a mansion at Irvington-on-Hudson, N.Y., where he lived in great style. Although he was honored as America's most successful painter, other artists resented him. In the 1880s new styles in painting caught the public's fancy, and Bierstadt lost popularity. His house burned down, his fortune had been expended, and his work was regarded as old-fashioned and outdated. In the 1940s, after 50 years of oblivion, his work began to regain popularity as interest in American romantic painting revived. His smaller works, especially the earlier sketches, are now greatly admired, and he has been restored to the position he deserves.

While there are no full-length studies devoted to Bierstadt, his painting is discussed in several works, including Eugen Neuhaus, The History and Ideals of American Art (1931); Frederick A. Sweet, The Hudson River School and the Early American Landscape Tradition (1945); Oliver W. Larkin, Art and Life in America (1949; rev. ed. 1960); and Edgar P. Richardson, Painting in America: The Story of 450 Years (1956).