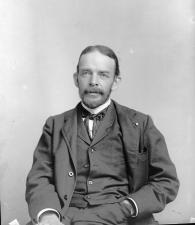 oxford
views updated
Luce, Stephen B. (1827–1917), naval officer, reformer, and founder of the Naval War College.Born in Albany, New York, Stephen Luce became a naval midshipman in 1841 and spent six years at sea, before being appointed to the Naval Academy at Annapolis. Graduating in 1849, Luce's experience caused him to think about improving naval training and education, and he became an instructor of seamanship and gunnery at Annapolis in 1860. During the Civil War, Luce alternated between the academy and participating in the Union blockade of the Confederacy.

After the war, Luce experimented with training reforms, corresponding with Gen. Emory Upton and observing Gen. William Tecumseh Sherman's efforts to establish an army postgraduate school system. Luce's efforts resulted in the establishment of the Naval War College at Newport in 1884. He was its president from 1884 to 1886, when, promoted rear admiral, he turned the college over to his friend and protégé, Capt. Alfred T. Mahan, and took command of the North Atlantic Station until his retirement in 1889. Luce continued to write, served as president of the Naval Institute, and later rejoined the Naval War College staff.

While not as intellectual as Mahan, Luce was a reformer and a practical sailor, who saw education as a way to harness technology. Luce influenced a generation of officers and played a crucial role in American military education.

Saint Stephen , Stephen I Stephen I Stephen I (ca. 973-1038) was king of Hungary, who went from pagan tribal leader to Christian leader of a powerful nation in the s… Alexander Hamilton Stephens , Alexander Hamilton Stephens (1812-1883) was a U.S. congressman, vice president of the Confederacy, and briefly governor of Georgia. Alexander H. Step… Theobald , Theobald (d. 1161). Archbishop of Canterbury. Theobald's long tenure of the archbishopric was in an exceptionally turbulent period. He became abbot o… Preparedness , Before 1898, there was almost no serious planning in the United States for a major war. By the time of the Pearl Harbor attack in December 1941, by c… James Stephens , The fame of the Irish novelist and poet James Stephens (1882-1950) rests almost entirely upon a single masterpiece, the novel The Crock of Gold. His… Colleges And Universities , colleges and universities, institutions of higher education. Universities differ from colleges in that they are larger, have wider curricula, are inv…