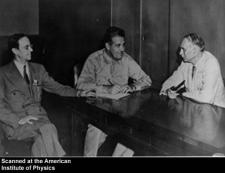 Leslie Groves (1896-1970) was the officer in the United States Army Corps of Engineers who directed the Manhattan Project (atom bomb) during World War II.

Leslie Richard Groves was born in Albany, New York, on August 17, 1896, the son of Leslie Richard Groves, a chaplain in the United States Army, and Gwen Griffith Groves. Given his father's army career, Groves could call no one place home. He entered the University of Washington in 1913 while his father was stationed at a post in Seattle, transferred to the Massachusetts Institute of Technology the following year, and in 1916 gained an appointment to the U.S. Military Academy. In November 1918 Groves graduated, fourth in his class, under an accelerated program instituted during World War I. Commissioned too late to see combat in France, Groves joined the Army Corps of Engineers as a second lieutenant and completed the basic and civil engineering courses at the Engineer School at Camp Humphreys (later renamed Fort Belvoir), Virginia. In 1922 he married Grace Wilson; the couple had two children.

Between 1921 and 1925 Groves served at various posts, including Fort Worden in Washington, the Presidio in San Francisco, and Schofield Barracks in Honolulu. Afterward he became assistant to the district engineer in Galveston, Texas, and directed the opening of the siltedup harbor at Port Isabel in Texas. Duty in Nicaragua surveying possible sites for a new canal was followed by four years in Washington, D.C. (1931-1935), where Groves was attached to the Military Supply Division, the army agency that developed new equipment, from jackhammers to searchlights. He was promoted to captain in 1934 and made chief of the division.

Over the next five years Groves, who was known as Richard or Dick to acquaintances, had a tour with the Missouri River Division of the Corps of Engineers (1936-1938) and studied at both the Command and General Staff School (1935-1936) and the Army War College (1938-1939). Assigned in 1939 to the general staff, Groves was promoted to major in July 1940 and four months later to lieutenant colonel (temporary). With a military defense buildup well underway by 1941, the Army's construction expenditures were averaging in excess of $500 million monthly. Groves was named deputy chief of construction with a mandate to complete dozens of new camps and other army facilities throughout the United States. Supervising the building of the Pentagon was one of his many responsibilities.

Creation of the Manhattan District

By the time the United States entered World War II, important research on various aspects of nuclear fission had been ongoing at several major universities and other locations for more than a year. Enough was known by 1942 for authorities to believe that a nuclear weapon might be developed before the end of 1944. Since much of the nuclear program would involve immense construction tasks, some calling for unprecedented technical sophistication, the Army was given overall responsibility for it. To direct the program a new office, named the Manhattan Engineering District (later called the Manhattan Project), was established in Washington, D.C. Colonel James Marshall, the first head of the Manhattan District, began the search for sites for the various new facilities that would be needed. Once it became evident that the Army's task would be far larger than anticipated, Groves was given authority over the Manhattan District in September 1942 and promoted to brigadier general.

Groves soon put the stamp of his forceful, albeit abrasive, personality on the project. For instance, as there was still considerable doubt over which of several enrichment technologies might be best suited for the task of making available uranium of sufficient quality for nuclear weaponry, Groves decided to pursue several promising options, including both gaseous diffusion and electromagnetic separation methods as well as thermal diffusion. He also ordered the construction of giant nuclear reactors where plutonium would be produced. "When in doubt, act, " he reasoned. Unlike the cautious Colonel Marshall, he did not hesitate in purchasing gigantic tracts of land at Oak Ridge, Tennessee, and Hanford, Washington, for the construction of these facilities and for townsites that would house the thousands of civilians and military personnel required to build and operate them. Services such as schools for the children of residents would also have to be provided. To do the work, Groves contracted with hundreds of firms, including such giants as du Pont, Union Carbide, and Eastman Kodak. Eventually over 125, 000 people would work under the aegis of the Manhattan Engineering District.

Another of the Manhattan District's new facilities was the bomb laboratory at Los Alamos, New Mexico. This would be the site of the arduous work of designing and assembling the world's first nuclear bombs. Several key scientists resented Groves' hard-driving methods and emphasis on security, but the collaboration between Groves and J. Robert Oppenheimer, the brilliant theoretical physicist Groves chose to direct the laboratory, proved fruitful. Groves secured for Oppenheimer the personnel, equipment, and materials he needed while the scientist ably guided work at the laboratory. Although some formidable problems about the final design of the two types of atom bombs under development remained to be solved as 1945 began, by the spring enormous progress had been made, especially on the more complicated but more promising implosion bomb. Planning for the use of the atom bomb began. Both Oppenheimer and Groves agreed the gadget— the name given to the atom bomb by project insiders— should be employed in combat. Groves, as chair of the target committee, had a major voice in determining the timing and circumstances of the A-bomb's use against Japan. Not until the first bomb had actually been dropped on Hiroshima on August 6, 1945, could the secrecy that had previously cloaked the Manhattan Project begin to be lifted; Groves inevitably became the center of a flurry of media attention.

After the end of World War II, Groves, virtually the prototype of a Cold War warrior, advocated the buildup of a stockpile of nuclear weapons ready to use should war develop between the United States and the Soviet Union. He remained head of the Manhattan Project until the end of 1946 when authority over the nuclear program was transferred to the newly created Atomic Energy Commission. Groves retired from the Army in 1948 and became vice president of research and development at Remington Rand. There he had responsibility for developing the commercial potential of the UNIVAC computer. Groves retired in 1961. He died in Washington, D.C., on July 14, 1970.

Despite his accomplishments in the Army prior to 1942 and in business after his retirement from the Army, Groves will be remembered for his direction of the Manhattan Project during World War II. His style of leadership provoked controversy, but his ability to see to the heart of matters and to make difficult decisions at the risk of jeopardizing his own reputation were vital to the success of the program. He was, in the words of Los Alamos scientist Robert Bacher, "a genius at getting things done under very adverse circumstances."

The papers of Leslie Groves are at both the National Archives in Washington, D.C. (where they are accessioned as the Office of the Commanding General File), and at the Hoover Institution in Stanford, California. William Lawren, The General and the Bomb (1988), is a helpful biography. Of the many books on the Manhattan Project, three of the most useful are Leslie Groves, Now It Can Be Told (1962); Vincent Jones, Manhattan:The Army and the Atomic Bomb (1985); and Stephane Groueff, Manhattan Project (1967). An overall view of the theory of nuclear fission and its application to the atom bomb is provided by Richard Rhodes, The Making of the Atom Bomb (1986). The best works on the Manhattan District's key facilities are James Kunetka, City of Fire (rev. ed. 1979); Charles W. Johnson and Charles O. Jackson, City Behind a Fence (1981); and Michele Stenehjem Gerber, On the Home Front:The Cold War Legacy of the Hanford Nuclear Site (1992). Major Allen C. Estes, "General Leslie Groves and the Atomic Bomb, " Military Review (August 1992), assesses Groves' leadership style. Issues relating to the atom bomb and the early Cold War are discussed in Gregg Herken, The Winning Weapon:The Atomic Bomb in the Cold War, 1945-1950 (1981). Also of interest is The Beginning or the End (1947), a film about the Manhattan Project containing some fact and considerable fiction. The role of Groves is played by Brian Donlevy. □

Tritium , Tritium Tritium is an isotope of the chemical element hydrogen (H). It has not only a single proton but also two neutrons in the nucleus of its atoms… Glenn Theodore Seaborg , Seaborg, Glenn (Glen) Theodore SEABORG, GLENN (GLEN) THEODORE discovery of plutonium and nine more transuranium elements, actinide concept, science p… Isotope , Isotopes are two forms of an element with the same atomic number but different mass number. The existence of isotopes can be understood by reviewing… Atomic , a·tom·ic / əˈtämik/ • adj. of or relating to an atom or atoms: the atomic nucleus. ∎ Chem. (of a substance) consisting of uncombined atoms rather tha… Atomic Bomb , ORIGINS MASSIVE RETALIATION NUCLEAR WEAPONS AND EUROPEAN SECURITY MUTUAL ASSURED DESTRUCTION BEYOND DETERRENCE AFTER THE COLD WAR BIBLIOGRAPHY The fi… James Rainwater , Bohr, Aage Niels Aage Niels Bohr Danish physicist Aage Niels Bohr (born 1922) is the son of another famed physicist, Niels Bohr. Both father and son…