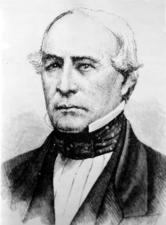 The American financier, politician, and businessman John Butterfield (1801-1869) is best known for his energetic role in developing American transportation and communication facilities. He organized the American Express Company.

John Butterfield was born on Nov. 18, 1801, to an obscure family which had settled in New York in the early 17th century. Irregular attendance during winters at primitive public schools provided him with a limited formal education. While still a boy he found employment as a stage driver. Later he became a small proprietor and eventually the organizer of the first great transcontinental stage line, the Overland Mail, in 1857. He was also involved at various times and in various places with packet boats, plank roads, Great Lakes steamers, telegraph lines, street railways, transportation facilities across the Isthmus of Panama, banking, and railroads.

Butterfield's involvement in stage driving led directly to his participation in the express business. He was among the first to see the commercial possibilities in the multiple services rendered by the express companies, ranging from delivery of diversified freight to collection of accounts. He also came to the industry when it was on the eve of great growth, as both the national economy and the areas serviced by Butterfield's enterprises were expanding rapidly. His initial venture in the express business was Butterfield, Wasson and Company, which merged with several other firms in 1850 to become the American Express Company. It quickly became the largest business of its kind in the United States.

In 1857 Butterfield and the American Express Company were awarded a $600,000 annual contract by the Federal government to establish and operate the first transcontinental stage line, the Overland Mail. Its establishment was lauded, although the route was criticized on the grounds that it deviated from the most direct route between St. Louis and San Francisco, and covered a distance of 2,800 miles en route to the Pacific (via El Paso, Yuma, and Los Angeles). Within a year hundreds of men and thousands of head of stock were procured, scores of way stations built, and rolling equipment secured. Butterfield supervised the operation, and soon service on a semiweekly basis began, with mail coaches departing on Sept. 15, 1858, from San Francisco and St. Louis. Regular service continued—in spite of the long distances and occasional attacks by Indians— until the outbreak of the Civil War forced the closing of the line in 1861 to avoid interference by Confederate forces.

Butterfield was also involved in a number of railroad developments, telegraph facilities, and banks. A lifelong Democrat, he was interested in the city of Utica, N.Y., where he built an elaborate home and commercial buildings, and also a business. He was elected mayor in 1865.

Butterfield combined great energy and minute attention to details with keen insight into the significance of impending change in the fields of communication and transportation. The result was spectacular success in enterprises which varied from plank roads to telegraph lines and touched widely scattered points in an area bounded by the Isthmus of Panama, the Great Lakes, and the Atlantic and the Pacific oceans. His wife, Malinde Harriet Baker Butterfield, whom he married in 1822, bore nine children, including Daniel Butterfield, who became a distinguished Union general in the Civil War.

Upon his death on Nov. 14, 1869, Butterfield was hailed for his contributions to the general growth and development of New York State.

There is no biography of Butterfield. Considerable information on him can be found in a biography of his son: Julia Lorrillard Butterfield, ed., A Biographical Memorial of General Daniel Butterfield (1904). See also LeRoy Hafen, The Overland Mail, 1849-1869 (1926); Edward Hungerford, Wells Fargo: Advancing the American Frontier (1949); and Noel M. Loomis, Wells Fargo (1968). □