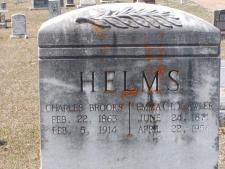 Jesse Helms (born 1921), conservative Senator from North Carolina, is well liked by the religious right for his position on abortion rights, school prayer, and school busing.

Born in Monroe, North Carolina, Jesse Helms studied at Wingate Junior College and Wake Forest University before serving in the navy during World War II. He became active in politics while working as a journalist in Raleigh, North Carolina, and served as an adviser to Willis Smith during his campaign for the U.S. Senate in 1950. After Smith's victory in what is regarded as the most virulently racist election in North Carolina history, Helms worked in Washington as an administrative assistant for Smith (1951-1953) and then briefly for Sen. Alton Lennon (1953). Returning to North Carolina in 1953, he worked as a television commentator and as a lobbyist for the banking industry before his election to the Senate as a Republican in 1972. He has been reelected by close margins in 1978, 1984, and 1990. In 1972 and 1984, presidential election years, he ran behind the Republican presidential nominee.

Helms has developed a reputation as an ideological purist. His record in the Senate has been consistently anti-United Nations, anti-Communist, anti-government spending, anti-welfare, anti-arms control, anti-foreign aid, and pro-military. His only major political about-face was his 1985 switch from an anti-Israeli position to one that is pro-Israel—one said to have been prompted in part by the narrowness of his 1984 victory over an opponent who received substantial contributions from pro-Israel individuals and groups outside North Carolina.

Support from the Religious Right

Helms is known for his derisive treatment of those he opposes—from Martin Luther King to the Soviet Union to homosexuals—and he has an old-time southern politician's visceral appeal for conservative, mostly rural, white North Carolinians. Said to have an Old Testament sense of good and evil, he has had close ties to the religious right throughout his career, and during his campaigns he has made frequent appearances on the shows of the televangelists Jim Bakker and Pat Robertson. Leaders of Jerry Falwell's Moral Majority have spoken on his behalf at political rallies.

Helms has not often been successful in getting his own legislation passed. In 1982 he failed to implement measures that would have stripped the Supreme Court of jurisdiction over cases involving abortion, school prayer, and school busing. He has cast dozens of votes to outlaw or restrict abortion, to eliminate busing for school integration, and to do away with food stamps. In 1989—after he became enraged over the inclusion of homoerotic photographs by Robert Mapplethorpe and Andres Serrano's photograph of a crucifix in a glass of urine in exhibits funded by the National Endowment for the Arts (NEA)—he tried unsuccessfully to convince the Senate to pass a bill that banned the funding of "obscene" art by the NEA or any other federal agency.

Helms has also used his position on the committee to block or hold up nominations regardless of which party controlled the White House. He opposed Republican Gerald Ford's nominations of Nelson Rockefeller for vice president and Donald Rumsfeld for secretary of defense. Many of Democrat Jimmy Carter's nominees faced the same treatment, as did Caspar Weinberger, whom Republican Ronald Reagan nominated for secretary of defense. In 1981 Helms stalled Senate approval of several Reagan appointees as undersecretaries of state, including Lawrence Eagleburger, Chester Crocker, Robert Hormats, and Thomas Enders. In 1985 Helms held up the confirmation of Thomas Pickering as ambassador to Israel at a time of crucial discussions over possible exchanges of western hostages in Beirut for Arabs in Israeli prisons.

The animosity between Helms and Pickering stemmed from Pickering's service as ambassador to El Salvador, where he was actively trying to work with the Duarte government while Helms had close ties to Duarte's ultraright-wing opponent, Roberto D'Aubuisson. Helms has been closely tied to various right-wing governments, including the regime of Augusto Pinochet in Chile. Beginning in 1986 Helms served as chairman of the editorial advisory board of the International Freedom Foundation, a front organization for the South African Defense Fund, which set up and funded the foundation to conduct political warfare against opponents of apartheid in the United States. Other prominent conservative Republicans connected to the foundation included representatives Dan Burton and Robert Dornan of California and African American political activist Alan Keyes. In 1988 Helms led the fight to pass legislation that required the United States to maintain two embassies in Israel, one in Tel Aviv, the secular capital, and one in Jerusalem, in the contested West Bank region.

Throughout the 1980s Helms was consistently a thorn in the sides of Democratic and Republican administrations as he tried to promote his own ultraconservative foreign-policy agenda. But as chairman of the Senate Foreign Relations Committee he had the power to do so. His staff included former intelligence personnel who have retained ties within their agencies, and he promoted the hiring of his staffers and aides for key positions in the various national security agencies. After the GOP took control of both houses of Congress, Helms attempted to dismantle U.S. foreign policy. In March of 1995 he introduced a bill to get rid of USAID, the United States Information Agency, and the Arms Control and Disarmament Agency. The Democrats filibustered the bill, but to get even Helms shut down the Foreign Relations Committee for four months. Even though foreign aid makes up only one percent of the federal budget, Helms thinks that foreign aid is "the greatest racket of all time" and "the ripoff of the American taxpayers." Informational holds can be placed on projects to temporarily delay funding. The last time the GOP controlled the Senate, there were five holds placed in four years; Helms placed eighty-four holds in 1995. He maintained his presence in the Senate after the 1996 election, defeating former Charlotte mayor Harvey Gantt with a 52.6% share of the vote.

In March 1996 the Helms-Burton Act was signed into law, sponsored by Helms and Republican Representative Dan Burton of Indiana. The law was designed to pressure Cuba to adopt democratic reforms and was approved a month after Cuban warplanes shot down two civilian aircraft, killing four Cuban-Americans on board. It was bitterly criticized by Canada and the European Union.

On April 18, 1997, Clinton approved a plan to reorganize the State Department, a decision that responded to a long-standing demand by Helms. The plan aimed to consolidate the Arms Control and Disarmament Agency and the U.S. Information Agency into the State Department by 1999. Helms remained feisty, as in the fall of 1997, he refused to hold a hearing on President Clinton's nomination of moderate Republican William Weld to be ambassador to Mexico, noting that the former Massachusetts governor was soft on drugs. Although he began to face mounting criticism, "Senator No" wasn't budging. Helms won the battle, as Weld asked the White House to withdraw his nomination in mid-September.

His next battle appears to be federal arts funding, as Helms is among politicians who want to eliminate the National Endowment for the Arts. He stated in a speech to his colleagues, "It is self-evident that many of the beneficiaries of NEA grants are contemptuous of traditional moral standards."