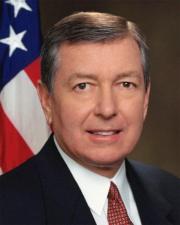 Ebenezer Rockwood Hoar served as attorney general of the United States from 1869 to 1870 under President ulysses s. grant.

Hoar was born February 21, 1816, in Concord, Massachusetts. His grandfather, Captain Samuel Hoar, was a Revolutionary War hero. His father, Samuel Hoar, Jr., was a Harvard graduate, a Massachusetts state senator, a U.S. representative—and a lifelong activist in partisan politics. Hoar's father was affiliated with the federalist party until it disappeared after the war of 1812, was associated with the whig party in the 1830s, was an organizer of the Massachusetts Free-Soil party in the 1840s, and joined the republican party toward the end of his life.

Hoar's educational path, professional career, and political interests closely mirrored those of his father. Hoar graduated from Harvard College in 1835 and from Harvard Law School in 1839. He was admitted to the bar in 1840 and he practiced law in Concord and Boston. His father's legal and political connections allowed him to try cases with leading attorneys of his day, including rufus choate and daniel webster.

Like his father, Hoar began his political career at the state level. In the early 1840s, he was elected to the Massachusetts state senate. His chance remark that he would rather be a Conscience Whig than a Cotton Whig gave the former name to the antislavery arm of the Whig party. By 1848, he was working with his father to organize the Free-Soil party in Massachusetts. This party emerged in the late 1840s to oppose the extension of slavery in newly acquired western territories and to curb the resulting legislative and electoral power that expansion would bring to southern cotton and tobacco interests.

From 1849 to 1855 Hoar served as a judge of the Massachusetts Court of Common Pleas. In 1859 he was named to the Supreme Judicial Court of Massachusetts. During his early years on the bench, Hoar took a special interest in the skills of the young lawyers who appeared before him. He was known to write to them—or their mentors—critiquing their courtroom appearances. After hearing oliver wendell holmes, jr., for the first time, Hoar wrote to Holmes's father, telling him that Holmes "made a very creditable appearance." Hoar also noted that the young Holmes's argument in the case at hand had been "a little savoring of experimental philosophy."

In March 1869, Hoar was named attorney general of the United States by President Grant. Hoar was popular with the public and thoroughly qualified to serve but he was also independent and outspoken. As attorney general, he severely alienated patronage-seeking senators when he insisted on filling nine new circuit judgeships with competent judges rather than using the positions as opportunities for political paybacks.

When a vacancy on the U.S. Supreme Court occurred shortly after Hoar became attorney general, President Grant offered him the seat. Hoar's formal nomination in December 1869 drew expected opposition from the Senate. Citing Hoar's effort to eliminate government patronage, as well as his opposition to the impeachment of President andrew johnson, conservative Republican senators were especially vocal in their disapproval.

When a second vacancy on the High Court opened while Hoar's nomination was pending, the Senate moved quickly to see that President Grant named a candidate for that vacancy who was more to their liking. Their choice was the late president Abraham Lincoln's secretary of war, edwin m. stanton. In exchange for Grant's nomination and support of Stanton, the Senate agreed to confirm Hoar.

The Senate pushed ahead on Stanton's nomination, confirming him in less than four hours, but Stanton never took his seat on the Court. Just four days after his confirmation, he suffered a fatal heart attack. Meanwhile, the Senate continued to debate Hoar's suitability for the position. "[R]egarding a dead Justice of its choosing to be an insufficient half of a bargain," it rejected Hoar by a vote of 33–24 on February 3, 1870.

The battle between President Grant and the Senate over Hoar's Supreme Court nomination remained a source of antagonism even after the vote. To end the fight and to cultivate Senate support for his other programs, Grant dismissed Hoar as attorney general in July 1870.

Hoar understood the political reasons for Grant's decision and he maintained a cordial relationship with the president. For his part, Grant remembered both Hoar's legal skills and his allegiance. Grant called on Hoar again in 1871 to serve on a joint commission to negotiate the treaty of arbitration that eventually settled the United States' Alabama claims against Great Britain.

Following the Civil War, relations between the United States and Great Britain were jeopardized by U.S. claims that England should pay for damages done during the war by the Alabama and other Confederate ships—which had been accorded belligerency status by Great Britain. (In international law, belligerency refers to the status of de facto statehood attributed to a body of insurgents, by which their hostilities are legalized). Hoar served as the Grant administration's liaison with senators who urged a hard-line approach to settling the claims. He was influential in convincing Grant to deny belligerency status to insurgents in Cuba (as Britain had done to the Confederacy), because the action would weaken the U.S. bargaining position with England during the treaty negotiations.

Following his work on the treaty, Hoar returned to his home in Massachusetts. As a Republican candidate, he sought and won a seat in the U.S. House, which he subsequently held from December 1, 1873, to March 3, 1875. His brother, George Frisbie Hoar, was serving as a representative from Massachusetts at the same time, having been elected in 1868.

After leaving office, Hoar continued to be active in local and national Republican politics until his death, on January 31, 1895, in Concord.