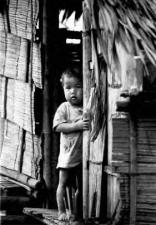 The Burmese king Alaungpaya (1715-1760) ruled from 1752 to 1760. Founder of the Konbaung dynasty, he infused new vigor into his people and engaged in conquests that expanded Burma's (now Myanmar) borders to an unparalleled extent.

Alaungpaya was born in the village of Moksobo on the western bank of the Irrawaddy River and given the name of Aung Zeya by his parents. His father was headman of the village, and when he later decided to relinquish the post, Aung Zeya succeeded him.

In 1737, when Aung Zeya was only 22, the belief spread among the superstitious people of the countryside that a new leader of great valor and courage would emerge among them to replace the ruler of the then weak Burman dynasty. After consulting various astrologers, the king arrested Aung Zeya, who denied that he was the would-be leader. He was released, and for the next 16 years he lived quietly among his fellow villagers of Moksobo.

In the intervening years the Mon, who were rivals of the Burmans and had been inhabitants of the country before the Burmans entered, renewed their attacks on the monarchy, toppling it in 1752. Their victory was short-lived, however. Aung Zeya, then 38, rose to lead the Burman resistance to Mon conquest and established a new dynasty that year at Moksobo, which he renamed Shwebo (as it is still known today). For himself Aung Zeya appropriated the title of Alaungpaya (the ruler who will someday become a Buddha).

After freeing upper Burma of Mon control, Alaungpaya moved down the Irrawaddy Valley against the adversary, finally capturing in 1755 the river port of Dagon, which he renamed Rangoon ("end of the battle;" today Burma's capital).

Completing the conquest of lower Burma in 1757, Alaungpaya returned to upper Burma to end the attacks of raiders from Manipur to the west and to defeat the Shan princes as far east as the Salween River. In his series of conquests he was helped by his sons Hsinbyushin and Bodawpaya. Alaungpaya also played a major role in reestablishing and reforming many other aspects of Burmese life, such as ending a schism among the Buddhist clergy, prohibiting the drinking of liquor, and decreeing an end to cattle slaughter (for economic as well as religious reasons).

Alaungpaya died of wounds suffered in the explosion of one of his own siege guns during an assault on the Thai capital of Ayuthia. He had attacked Thailand to bring back Mon refugees and some Thai to repopulate lower Burma. The Konbaung dynasty, which he established, was the last dynasty to rule over Burma until the country's fall to British colonial rule in 1885.

Alaungpaya and his military victories in particular are the subject of a chapter in D. G. E. Hall, Burma (1950; 3d ed. 1960), one of the best histories of the country. A sensitive, accurate appraisal by the Burmese historian Maung Htin Aung is offered in A History of Burma (1967). There is also a good treatment of Alaungpaya and his place in Myanmar's history in John F. Cady, A History of Modern Burma (1958). □