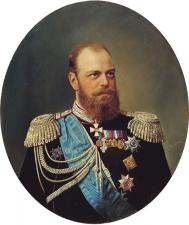 Considered one of the great medieval popes, Alexander III (c. 1100–1181) held the pontificate from September 7, 1159, until his death in 1181. He is remembered for instituting the two-thirds majority rule for papal elections, championing the universities, and endorsing ecclesiastical independence. A man of courage and conviction, Alexander, often forced to reign in exile, stood up to the emperor Frederick I and his antipopes. It was during Alexander's papacy that St. Thomas Becket was martyred.

Alexander III was born as Orlando (also known as Roland, Rolandus, and Laurentius) Bandinelli around 1100 to a respected Tuscan family with political roots. He became a celebrated professor of Holy Scripture at the University of Bologna, where most likely he had studied under Gratian, the "father of the science of canon law." Through Gratian's scholarship, the study of church law first became a discipline quite apart from theology; his Concordantia discordantium canonum became the basic text on canon law.

The Summa Magistri Rolandi, a commentary on Gratian's treatise, is thought to have enhanced Alexander's reputation among the curia, though some scholars contest the attribution. Canon regular at Pisa from 1142 to 1147, Alexander was summoned to Rome in 1148 by Pope Eugenius III, who named him cardinal deacon in 1150, then cardinal priest of St. Mark's in 1151. It is possible that during this period Alexander completed a manuscript, Sententie Rodlandi Bononiensis magistri, based on the work of French canon and scholastic philosopher Abelard. In 1153 Alexander became vice-chancellor of the Holy Roman Church. In 1153, he was appointed chancellor, a position in the curia responsible for diplomatic relations. He would hold the post through the pontificates of Eugenius III (1145–1153), Anastasius IV (1154), and Adrian IV (1154–1159), remaining a trusted advisor to Adrian throughout his reign.

Alexander's contemporary and biographer, Boso, characterized his subject as "a man of letters, fluent with polished eloquence, a prudent, kind, patient, merciful, gentle, sober, chaste man." These traits helped ensure his success in Rome. Adrian frequently chose Alexander to lead negotiations on numerous missions between the papacy and secular monarchies in an ongoing battle to wrest power from one another. Alexander's unwavering anti-imperialist stance during these early conventions would have far-reaching effects on his own papacy.

Frederick and the Antipopes

In 1152, Pope Adrian IV crowned Frederick I of Germany Holy Roman Emperor. It was an alliance formed for the mutual support and protection of the Church and the sovereign king against their enemies, especially the Normans. But within two years, the pope had befriended the Normans and no longer needed the protection of Frederick. The pope's relationship with the emperor gradually deteriorated until finally, at the Diet of Besançon in 1157, as the pope's representative Alexander challenged Frederick I's supremacy.

The convention had been called by Frederick to hear complaints from the papal legation on his treatment of Archbishop of Scandinavia, an outspoken anti-imperialist whom he had arrested. The historical fracas ensued over the papal legate's use of the Latin word beneficium, which could connote either personal benefit or feudal concession. Frederick insisted that his authority was God-given, not something conferred on him by the pope. But Alexander remained firm among the cardinals in opposing the supremacy of Frederick I.

With an eye to influencing the succeeding pope, Frederick plotted to undermine the cardinals who opposed him. He sent two anti-papist emissaries to Rome: Otto, Count of Wittelsbach, and archbishop-elect of Cologne, Rainald von Dassel, whose appointment was never confirmed by the Holy See. The emissaries' work became evident when it came time for the twenty-two cardinals to elect the pope's successor: Alexander, though favored by a majority after three days of deliberations, was opposed by three imperialist cardinals, who voted for Victor IV. The conclave, or gathering of cardinals for the express purpose of choosing a pope, was disbursed by a horde sympathetic to the antipope Victor IV, and Alexander fled south, where he was consecrated pope at the monastery of Farfa.

Frederick believed, as protector of Christendom, that it was his duty to solve the controversy among the cardinals over the papal election. But Alexander refused to cede such authority over to the earthly jurisdiction of the emperor. After refusing to acknowledge Alexander III as true pope, Frederick was excommunicated in 1160. The schism this created would last for seventeen years, with Frederick installing succeeding antipopes Paschal III (1164–1168) and Calixtus III (1168–1178) in Rome. With Alexander in exile in France from 1162 to 1165, and in Gaeta, Benevento, Anagni, and Venice in 1167, he became the West's symbol of resistance to German domination. Frederick, meanwhile, busy defending his sovereignty, fell to the Lombard League, an alliance of the northern cities of Verona, Vicenza, and Padua, along with Venice, Constantinople, and Sicily. In 1176, after numerous attempts to overthrow the League and the pope, and after seeing his army destroyed in Rome by a fatal fever, Frederick surrendered at the battle of Legnano. At the treaty of Venice the following year, Frederick submitted and recognized Alexander as pope.

While in exile in France, Alexander met Thomas Becket, Archbishop of Canterbury. Becket had been chancellor to Henry II of England, and when appointed archbishop he was hesitant to accept the position, fearing his duties as archbishop would require him to take positions unfavorable to the king. This indeed was the case, especially on issues that pitted church and crown against one another. In 1164, Becket was forced to flee England.

Alexander III, having received support from England, was hesitant to criticize Henry II, even as the king tried to shape the relationship between the church and state in such a way that the state would have precedence in certain legal issues and could weigh in on matters of excommunication. Alexander, still the quintessential diplomat, advised Becket in 1165 that he should "not act hastily or rashly" and that he ought to attempt to "regain the favor and goodwill of the illustrious English king." Scholars have both scrutinized and censured Alexander for his failure to defend Becket against Henry. Many believe the conflict did not have much resonance for the pope at the time, while others suggest that twelfth-century canon law did not support Becket's legal arguments. Still other scholars marvel at Alexander's diplomatic skills, adding that his vast experience with secular leaders told him persuasion generally yielded better results than confrontation.

In 1170, after an escalation in the conflicts between the archbishop and Henry II, the archbishop was murdered at the altar of his cathedral by four knights. Alexander canonized the saint two years later, and in 1174 humbled the British king by receiving his penance and securing from Henry II all the rights for which Becket had fought.

In an effort to repair the schism that tore at the church with Frederick's appointment of the antipopes, Alexander convoked the Third Lateran Council in 1179. Before hundreds of bishops and abbots, twenty-one cardinals, and laymen from all corners of the Earth, the pope issued a number of regulations that sealed his reputation as a gifted ecclesiastical legislator. The bishop of Assisi opened the council by praising the pontiff, declaring, "The great pontiff—who recently rose from the ocean of raging waves of persecution like a serene sun—illuminates not only the present church but the entire world with his worthy brilliance of shining splendor."

Among the pope's decrees at the council was the institution of the two-thirds majority rule for papal elections, a law extant today. Other improvements to the church included establishing procedures for canonizing saints to avoid numerous abuses of canonization, setting minimum age limits for bishops, and recommending they stress simplicity in their lifestyles and refrain from hunting.

Even Alexander's enemies recognized his intellectual and moral virtues. His legacy as an adherent of the movement to build and support universities, which became the great centers of learning in the Middle Ages, and as a champion of ecclesiastical independence are among his most outstanding accomplishments. His epitaph referred to him as "the Light of the Clergy, the Ornament of the Church, the Father of his City and of the World." Voltaire, the eighteenth-century French writer and opponent of organized religion, commemorated the pontiff by writing, "If men have regained their rights, it is chiefly to Pope Alexander III that they are indebted for it; it is to him that so many cities owe their splendor." Upon the death of Alexander III in 1181, Lucius III succeeded to the papacy.

oxford
views updated
Alexander III (c.1105–81) Pope (1159–81), b. Orlando Bandinelli. Emperor Frederick I opposed his election to the papacy and had an antipope, Victor IV, appointed. The ensuing schism ended 17 years later with the victory of the Lombard League over Frederick at the Battle of Legnano.