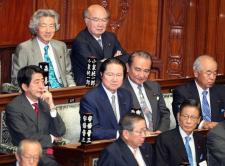 The first Japanese prime minister born after World War II, Abe faced problems that troubled Japanese society as a whole in the early 21st century. Like his predecessors, he tried to strike a balance between modern ideals of transparency and Japan's tradition of closed, clubby hierarchies in business and government. And he struggled with the issues of Japanese national pride and the country's still-conflicted attitudes toward its militaristic past and its World War II–era crimes. Those tensions, which bedeviled a succession of Japanese leaders, brought a quick end to Abe's reign as Prime Minister.

Shinzo Abe was born in Nagato Japan, in Yamaguchi Prefecture, on September 21, 1954. His family was immersed in Japanese politics on both its paternal and maternal sides. His maternal grandfather, Nobusuke Kishi, was a key military leader during World War II, serving as part of General Hideki Tojo's circle of advisers. Kishi was an American prisoner of war for three years but was released in 1948 and later favored a strongly pro-American foreign policy even as he attempted to rebuild the Japanese military. He was Japan's prime minister from 1957 to 1960. One observer, at least, detected traces of the grandfather's attitudes in the grandson. “Abe's beliefs and values are similar to Kishi's,” Japanese Diet (legislature) member Katsuei Hirasawa told Bryan Walsh of Time. “He's inherited his grandfather's political DNA.”

On his father's side, too, Abe's family tree was filled with well-liked politicians. His father's father, Kan Abe, served in Japan's House of Representatives, and his father, Shintaro Abe, was the country's minister of foreign affairs from 1982 to 1986 and was often mentioned as a potential prime minister himself. Shinzo Abe was more distantly related to another Japanese prime minister, Eisuke Sato, who served from 1964 to 1972 and was later awarded the Nobel Peace Prize.

After studying political science at Seikei University in metropolitan Tokyo, Abe graduated in 1977. He headed for the United States in the late 1970s, taking English-language and political science classes at the University of Southern California. Abe returned to Japan in 1979 and worked for the Kobe Steel corporation for three years, but it was not long before he returned to the family vocation. In 1982 he entered the political world as an executive assistant in the foreign affairs ministry. After that he set his sights on ascending through the hierarchy of Japan's dominant Liberal Democratic Party, or LDP.

Abe was a part of the LDP's inner circle before he ever held formal political office. In the late 1980s he served as private secretary to the chair of the LDP's general council, and then as private secretary once again to the party's secretary-general—influential posts within the backroom environment of Japanese politics of the day. Abe's father died in 1991, and the son's political ambitions deepened. In 1993 he was elected by a landslide from a Yamaguchi Prefecture district to Japan's House of Representatives, the lower chamber of the Diet. At first he sometimes behaved like a pampered scion of a political dynasty. Hirasawa, one of his legislative mentors, once noticed him reading manga comic books during a Diet session—and was dismayed when Abe refused to put the comic book down after his misstep was pointed out. Soon, however, Abe was angling for the party posts that were the well-trodden pathways to real power in Japan. One newspaper dubbed him the Prince of Politics.

The LDP has been a “liberal” party in the classical sense of the word, favoring limited government intervention in free markets; it would be called conservative in Western terms, and Abe belonged to a powerful faction that was in the mainstream of the party's conservative beliefs. He rose quickly into the circle of party leaders from whom Japan's top government officials have traditionally been drawn. In 1999 he became director of the LDP's social affairs division, and the following year he was named deputy chief cabinet secretary. In 2003 he became secretary general of the LDP, and in 2005 he was appointed chief cabinet secretary under Prime Minister Junichiro Koizumi, a post regarded as a stepping-stone to that of prime minister.

A flamboyant figure who visited the Graceland mansion and sang karaoke versions of Elvis Presley songs during a trip to the U.S., Koizumi took Japan in new directions. He backed the U.S. invasion of Iraq and contributed several hundred members of the Japan Self-Defense Forces to the multinational forces serving in Iraq—the first foreign deployment of Japanese forces since World War II. He also stirred controversy with his visits to Tokyo's Yakusuni Shrine, a Shinto memorial to Japan's war dead; those visits were seen as provocative by some in China, Taiwan, North and South Korea, and other countries that bore the brunt of Japanese expansionism during the war. On the home front, Koizumi tried to shake up some of the longtime government monopolies that he saw as impediments to Japanese productivity. In particular he attempted to privatize Japan Post, which in addition to delivery services also functioned as an insurance provider and as one of the world's largest savings banks. In 2006, after five years as prime minister, Koizumi stepped down, and Abe emerged as the consensus choice within the LDP to replace him. After being chosen in an election held among LDP members, he took office as Japan's 90th prime minister on September 26, 2007. He was the youngest prime minister in postwar Japanese history.

Abe had raised his public profile with strong criticisms of North Korea, a longtime nemesis of Japan. When the communist North Korean government confirmed in 2002 that agents of its secret services had kidnapped Japanese nationals and brought them to North Korea in the 1970s, Abe took a visible role in Japan's response, at one time urging a group of visiting abductees to defect to Japan. He took a hard line against North Korea's growing nuclear weapons program and its test-firing of missiles capable of reaching Japan. Abe frequently appeared on television in connection with these issues, creating the impression that he was a strong leader and helping to propel him to the prime ministership. At the same time, he carefully avoided tipping his hand on most key issues.

After becoming prime minister, however, Abe moved to quiet suspicions that he was a hard-line nationalist who might further worsen Japan's relationships with its neighbors. In October of 2006, shortly after taking office, he visited Beijing, China, and Seoul, South Korea, reassuring major Japanese trading partners of an atmosphere of stability. “Abe will stand up and make firm decisions for the Japanese people,” LDP foreign-affairs specialist Ichita Yamamoto told Walsh. “But he's not a hard-liner against China or anyone. He's a strategist.” Abe further calmed the waters by declining to announce any plans to visit the Yakusuni Shrine, and in fact he did not visit the shrine at all during his term in office. His approval percentage in public-opinion polls soared into the high 70s.

Before long, however, Abe's popularity plunged. The heated debate over the privatization of Japan Post caused him problems: seeking to repair rifts within the LDP over the issue, he readmitted 11 Diet members who had left the party after Koizumi insisted on pushing privatization forward. But, noted the Economist, “[t]hat suggested Mr. Abe preferred back-room politics to pushing for change.” (Japan Post finally dissolved into a group of private companies in October of 2007.) Behind the scenes, Abe worked to curb the system of amakuidari, the revolving-door policy by which Japanese bureaucrats were often installed in high positions in the industries they had regulated while in government. However, much less colorful than the combative Koizumi, Abe was seen as a politician ready to revert to backroom dealings. Abe also suffered when his health minister, Hakuo Yanagisawa, said that Japanese women should function as “breeding machines” (in the Economist's translation) in response to the country's low birthrate. Other scandals bedeviled the Abe administration in 2007: his agriculture minister committed suicide in May of that year (and his successor was later forced to resign), and the government was forced to admit that it had lost records pertaining to some 50 million pension accounts.

Although he had a successful summit meeting with Chinese leader Hu Jintao in 2007, Abe also had difficulties managing the more emotional aspects of Japan's relationships with neighboring countries. Japanese army records showed that Chinese and Korean women had been forced into sex slavery during World War II, but Abe at first denied that there was hard evidence that any coercion had occurred, and he refused to make official a 1993 apology for the episode by a lower-ranking government official. An international outcry ensued. The New York Times editorialized that “Mr. Abe seems less concerned with repairing Japan's sullied international reputation than with appealing to a large right-wing faction within his Liberal Democratic Party that insists that the whole shameful episode was a case of healthy private enterprise.” Once again, less controversial Abe initiatives, such as the introduction of patriotic themes in Japanese primary education, were over-shadowed, and he was forced to make an apology of his own before the Diet.

The cumulative result of these blows to Abe's popularity was a massive defeat for the LDP in parliamentary elections held on July 29, 2007. The party suffered through its worst showing since 1955 and lost not only its absolute majority, but also its traditional position of dominance within the Diet. Rural Japanese voters rejected Abe's party in favor of the opposition Democratic Party of Japan by especially large margins. The Economist opined that Abe “has shown himself to be diffident, patrician and out of touch with people's everyday concerns.” On the other hand, some observers attributed the LDP's disastrous showing not to any failings on Abe's part but to the delayed impact of long-needed economic reforms initiated by the more persuasive Koizumi.

At first, with no clear mandate in place for any Japanese leader, Abe announced his intention to stay on as prime minister. Criticism of his leadership continued to mount, however, and Abe was also reported to be in poor health. On September 12, 2007, he abruptly announced that he would resign. The day after his announcement he was hospitalized, suffering from psychological stress and exhaustion. His resignation took effect on September 26, and he was replaced by Yasuo Fukuda. The victim of a period of general instability in Japan's political life, he was at least temporarily sidelined from the political sphere he had inhabited since he was a young man.