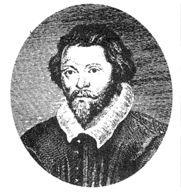 The English composer William Byrd (ca. 1543-1623) was one of the greatest polyphonists of his time. He also excelled in the composition of keyboard music, stage songs, and instrumental fantasias.

William Byrd was born in Lincolnshire, probably in 1543. Nothing is known of his boyhood except that he became a child of the Chapel Royal some time after 1550, moving then to London, where he was "bred up under Thomas Tallis." At the age of 20 Byrd received his first appointment, returning to his native shire as organist at Lincoln Cathedral. Within a few years he succeeded Robert Parsons as one of the gentlemen of the Chapel Royal. The records are unclear as to whether Byrd moved to Westminster at this time. In 1572, however, he was replaced at Lincoln Cathedral by Thomas Butler, whom he himself had chosen, and it is clear that at that time he moved to London, where he shared the post of organist with Tallis.

In 1568 Byrd married Juliana Birley; they had a son in 1569 and a daughter in 1572. It was during this period that he was charged with recusancy, for which he was troubled the rest of his life, and that he acquired the first of his leases, which were to embroil him in litigation from this time forward.

These were years of close professional association with Tallis, his former mentor and senior by some 40 years. Together they received in 1578 a license "to imprint any and so many as they will of set songe or songes in partes, either in English, Latine, Frenche, Italian or other tongues that may serve for musicke either in Church or chamber, or otherwise to be plaid or soong…. " This license, a virtual monopoly for music printing, passed to Byrd's sole ownership upon the death of Tallis in 1585. The proprietary fervor it inspired no doubt was a factor in the extraordinarily productive period which followed. During the next few years Byrd published no less than four major collections, all devoted entirely to his own works: Psalmes, Sonets & Songs (1588), Songs of Sundrie Natures (1589), Cantiones sacrae I (1589), and Cantiones sacrae II (1591).

The music in these, along with that available only in manuscript, such as the important keyboard collection "My Lady Neville's Book," reflects his esthetic position as a transitional figure between medieval and modern times. The very fact that these collections were composed and prepared for circulation in print furnishes one aspect of their modernity. And that the composer himself was launching these editions as a financial venture is another. Both these considerations relate to innovative features on the esthetic side, which in turn signalize several new developments in the musical culture of 17th-century England.

No hint of a new praxis appears in the title of the first collection, Psalmes, Sonets & Songs of Sadness and Piety, Made into Musicke of Five Parts (1588). However, Byrd did provide for a glimpse of contemporary procedures in the circulation of music with his expressed resolve to expose untrue copies of his works then abroad. All this, music printing was to change.

In the body of the collection, one of the upper parts of pieces in all three categories indicated in the title is marked "the first singing voice." Byrd probably composed all these as solo songs with viol accompaniment (we know that "Though Amaryllis dance in green" originated thus), then adapted the accompanying viol parts to the text in preparing these for publication. Presumably his motivation was to increase sales by appealing to a wider public, or at least to a greater number of performers. On the whole, though, the effect of this procedure was to bring Byrd's compositions into alignment with the Italian madrigal, by then new only in England, and they are rather stiff and unwieldy part-songs compared to the livelier polyphonic works of the Italians.

More evidence of Byrd's concern for marketability appears with the Songs of Sundrie Natures, Some of Gravitie and Others of Myrth, Fit for All Companies and Voyces (1589). And the title of the last set of secular part-songs, that of 1611, is even more explicit with its prescription for aleatory performance: Psalmes, Songs & Sonnets: Some Solemne, Others Joyful, Framed to the Life of the Words: Fit for Voyces or Viols In other words, both content and medium are arranged for the largest possible number of hearers or performers.

In the Cantiones sacrae Byrd clearly though tacitly went against the policy of the English Reformation, intended not only to remove the political hegemony of Rome from England but also to expunge Latin from the liturgy. But in the two books of Gradualia which marked his next flurry of editorial activity, he publicly avowed the recusancy for which he and members of his family had already been called to account numerous times.

The first book of Gradualia we know only from the second edition of 1610. The second book, published in 1607 and also appearing in a second edition in 1610, consists of 43 motets for four, five, and six voices. Again, these motets are generally shorter than those in the Cantiones sacrae collections and are obviously intended for use by those who sought formal musical expression of their Catholic faith. That he would have dared publish two such books, particularly just after the Gunpowder Plot in 1605, which raised such a wave of anti-Catholic sentiment, testifies to the strength of his position at court and to the excellence of his general reputation as the "father of English music." Musically, these books represent the work of the greatest English polyphonic master of the 16th century.

The same may be said of his more than 60 English anthems, some being his own adaptations of Latin motets; of his 50 stage songs; of the keyboard works in the "Fitzwilliam Virginal Book," in "My Lady Neville's Book," and in the printed collection Parthenia; and, not least, of his miscellaneous canons, rounds, and music for strings.

The standard biography of Byrd is Edmund H. Fellowes, William Byrd (1936; 2d ed. 1948), which gives a full list of sources and discusses the main forms and the style in which Byrd composed. It is, however, out of date, as is Frank Howes, William Byrd (1928). Good background material is available in Paul Henry Lang, Music in Western Civilization (1941); Gustave Reese, Music in the Renaissance (1954; rev. ed. 1959); Jack A. Westrup, An Introduction to Musical History (1955); and Donald J. Grout, A History of Western Music (1960).

Prolific English composer whose works are believed to have begun the Baroque style of harpsichord and keyboard music. Born in Lincolnshire, he joined the Chapel Royal as a boy and apprenticed to Thomas Tallis. Under the Catholic queen Mary I, this institution, which produced and performed music by appointment to the monarchy, was flourishing. Talented composers from all over the continent of Europe were invited to take up posts in the Chapel Royal, and Byrd contributed his own compositions from a young age. At the death of Mary and the succession of the Protestant queen Elizabeth I, Byrd and his Catholic sympathies were out of favor. He left the Chapel Royal and, in 1562, was appointed as an organist at Lincoln Cathedral. He returned to the Chapel Royal, where he was appointed to a salaried position, in 1572 and remained as a composer and organist. Byrd and Tallis were granted a lucrative license to print music in 1578. Over the next few years, they published several major collections of songs, including two in English: Psalmes, Sonets and Songs in 1588 and Songs of Sundrie Natures in 1589. Two collections of Latin motets (polyphonic choral compositions), under the title of Cantiones Sacrae, were published in 1589 and 1591. These were among the first song collections ever to be brought out in print. Byrd also published an important collection of his keyboard pieces, entitled My Lady Neville's Book. Discouraged by the anti-Catholic laws and politics of London, Byrd moved to a small village, Stondon Massey, in 1593 and remained there until his death. He published two sets of Gradualia after the turn of the seventeenth century, which were motets intended for performance during Catholic services. Writing and publishing this music was an act of daring in Protestant England where Catholic worship was still banned by law. After the “Gunpowder Plot” of 1605, in which Catholics were suspected of attempting to destroy the English parliament, Byrd's Gradualia and all of his Catholic church music was banned. Nevertheless, Byrd himself took part in illegal Catholic services, most of which were held in private homes, and continued to provide music to be performed during the Latin Mass. He also wrote stage songs, madrigals, and keyboard works that were collected in the Fitzwilliam Virginal Book, and various shorter works for voice and strings.