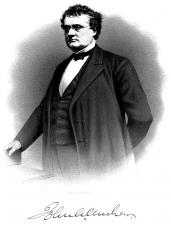 American historian John Bach McMaster (1852-1932) pioneered in the study of social history in the United States.

John Bach McMaster was born on June 29, 1852, in Brooklyn, N.Y. His father's varied business interests kept the family in comfortable circumstances until McMaster was studying at the College of the City of New York, when financial reverses forced him to take a part-time job. He graduated in 1872, showing more aptitude for the sciences than for history. After brief periods as a surveyor and private tutor, he was hired to teach engineering at Princeton in 1877.

By this time McMaster had become interested in history, apparently through his reading of Thomas Babington Macaulay's History of England. McMaster determined to do for the United States what Macaulay had done for England. Working furiously, part time and in secret, he finished the first volume of his History of the People of the United States in 1881 and finally succeeded in publishing it 1883. It was an immediate success and resulted in the University of Pennsylvania's invitation to McMaster to accept a newly established chair in American history. McMaster remained at Pennsylvania until his retirement in 1920. The subsequent volumes of his history were published at intervals, the eighth, and last, appearing in 1913.

As a historian, McMaster was distinguished by his emphasis on social history, that is the conditions under which ordinary Americans lived. His technique was cross-sectional in that he strove to portray America and the American people at certain points in the past. In doing this he considered topics which usually escaped the notice of contemporary historians. He was among the first American historians to appreciate the importance to history of economic developments, to understand the importance of the West, to use newspapers as important sources of historical information, and to break away from the narrative form in writing history.

McMaster's work also had defects. It tended to be weak in research in original sources, to ignore important social groups such as farmers, to give too much attention to the passing and ephemeral and too little to long-range historical forces, and to be insufficiently balanced and impartial in its judgments of individuals. Yet with all these defects, his work opened new doors for American historians by using new approaches, new perspectives, and new materials on the American past. McMaster died of pneumonia in Darien, Conn., on May 24, 1932.

The standard account is Eric Goldman, John Bach McMaster, American Historian (1943), although it lays perhaps too much emphasis on McMaster's defects. William T. Hutchinson's essay on McMaster in The Marcus W. Jernegan Essays in American Historiography, edited by Hutchinson (1937), offers another perspective, although, like Goldman's account it is highly critical.