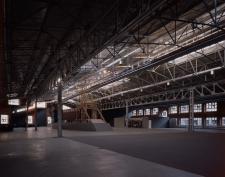 Konstantin Stepanovich Melnikov (1890-1974) was one of the Russian avant-garde's most prolific and internationally celebrated architects during the 1920s. By 1937 the individualism of his architecture no longer had a place in Stalin's U.S.S.R.

Konstantin Melnikov was born a peasant on the outskirts of Moscow in 1890. Young Melnikov showed an early proclivity for drawing and began to attend the Moscow School of Painting, Sculpture, and Architecture. After completing the general education program, he studied painting, and then resolved to be an architect. He stayed on at the Moscow School, completing the architecture program in 1917. As seen in his surviving student projects, Melnikov's education in architecture was conservative, emphasizing the classical architectural tradition. Although he would quickly move away from historical revivalism, the monumental forms of some of his later modern works occasionally suggested the undercurrent of his classical training.

Melnikov entered the profession of architecture during the year of the Bolshevik Revolution. The political, social, and economic demands upon architecture in the emerging Soviet Union were to be very different from those of Melnikov's youth and training in tsarist Russia. The economic desperation of Russia due to World War I, revolution, and the subsequent civil war resulted in few opportunities for real construction for a young architect. Like many of his architectural colleagues, Melnikov spent his first years after the communist revolution working primarily on paper architecture: unbuilt projects, often for competitions, with an emphasis upon defining a modern architecture appropriate for building a new socialist society.

During the early 1920s Melnikov taught architecture at VKhUTEMAS, a Moscow school popular with avant-garde artists and architects. With the coming of Lenin's New Economic Policy, modest opportunities to build were being presented to Melnikov. One of his important early works was the Makhorka Pavilion, built in Moscow to promote a native tobacco at the All-Russian Agricultural and Cottage Industry Exhibition of 1923. Jutting diagonals, factory-like windows, large graphics, and a spiral staircase animated the bold geometric forms of this small wooden structure. Melnikov's classical training was now distant as he worked through the dynamic and abstract aesthetic language of modernism.

Melnikov was beginning to emerge as a favored architect in the new Soviet Union. In 1924 he designed Lenin's glass-topped sarcophagus that was placed inside the Lenin Mausoleum on Red Square. Melnikov then found himself on the international architectural stage when he won a closed competition to be the architect of the Soviet Pavilion at the 1925 Exposition des Arts Décoratifs in Paris. Melnikov's pavilion announced to the West the startling modern accomplishments of the avant-garde in the U.S.S.R. The building's austere geometric planes and walls of glass were brought into dynamic tension through a dramatic outdoor stairway that sliced diagonally through the heart of the building. Despite the modernity of the forms, the structure was framed in wood, as were several of his early buildings. Melnikov was defining a new architecture while transforming the wooden structures of his own peasant origins.

After his success in Paris, Melnikov built a number of structures in the Moscow area, including an impressive series of six workers' clubs. Workers' clubs in the Soviet Union were intended to be new centers of community life, providing cultural and recreational activities for the workers. Melnikov designed each club with a unique landmark image, as most dramatically seen in his Rusakov Club in Moscow (1927-1929), an expressive wedge-shaped building. The functional considerations of acoustics and flexibility in the interior of this workers' club generated the building's powerful forms. The dynamism of this building and others by Melnikov was particularly captured in the contemporary photographs of Alexander Rodchenko.

Melnikov was not the typical Russian avant-garde architect; he was constructing many buildings, not just drawing them. Melnikov even built his own private house with studio in Moscow (1927-1929). This highly original design consists of two interlocking upright cylinders with numerous elongated hexagonal windows and a large front wall of glass. The house was built with traditional Russian materials (stuccoed brick for exterior walls and wood for floors) used structurally in inventive ways. Such buildings by Melnikov asserted a strong individualism in a country where Stalin was consolidating his growing powers into a dictatorship.

In comparison to the 1920s, Melnikov would build very little during the 1930s. He unsuccessfully entered architectural competitions with increasingly fantastic and theatrical designs, such as his grandiose projects for the Palace of Soviets (1931-1932) and the headquarters of the People's Commissariat of Heavy Industry (1934). The scale of these two unbuilt structures by Melnikov would have dwarfed Moscow's Kremlin in attempts to monumentally symbolize the triumphs of the Soviet Union.

In the 1920s, during the heyday of avant-garde architecture in the Soviet Union, the formalism of the Rationalists contrasted with the functional and structural preoccupations of the Constructivists. By the 1930s neither side of this Modernist debate was fully answering the Stalinist call for socialist realism in architecture. The avant-garde withered as Soviet architects turned upon each other in attempts to define what was wrong in contemporary architecture. Although the individualist Melnikov preferred to remain above the fray of factional divisions among Soviet architects, the categorization of Melnikov by some as a formalist most concerned with novel aesthetics would be his professional undoing. At the First All-Union Congress of Soviet Architects in 1937, Melnikov was strongly denounced, and his career as an active architect essentially came to an end.

Melnikov lived until 1974—painting, drawing, and writing in his unique Moscow house. He occasionally designed buildings that were never built, such as his 1962 Soviet Pavilion project proposed for the 1964 New York World's Fair. Finally, during the last decade of his life, Konstantin Melnikov began to receive growing attention for his earlier achievements from the Soviet and international scholarly communities.

An important monograph on Melnikov is S. Frederick Starr, Melnikov: Solo Architect in a Mass Society (1978). Starr interviewed Melnikov and had access to the family's archive of Melnikov's works. Concise discussions of Melnikov can be found in the following: William Craft Brumfield, A History of Russian Architecture (1993); Alexander Ryabushin and Nadia Smolina, Landmarks of Soviet Architecture 1917-1991 (1992); Catherine Cooke and Justin Ageros, eds., The Avant-Garde: Russian Architecture in the Twenties (1991); Catherine Cooke, Architectural Drawings of the Russian Avant-Garde (1990); Selim O. Khan-Magomedov, Pioneers of Soviet Architecture: The Search for New Solutions in the 1920s and 1930s (1987); O.A. Shvidkovsky, ed., Building in the USSR 1917-1932 (1971); and Anatole Kopp, Town and Revolution: Soviet Architecture and City Planning 1917-1935 (1970). □

Konstantin Stepanovich Melnikov rose to fame in the West as a result of his design for the Soviet Pavilion at the Paris Exhibition of Decorative Arts in 1925, a building marked by its dramatic formal simplicity and avoidance of decorative rhetoric, bold use of color, windowed front facade, and unusual exterior staircase that cut diagonally across the rectangular two-storied building. But his most impressive work in the Soviet Union was his club architecture, none more striking than the Rusakov Club, designed and built between 1927 and 1929 for the Union of Municipal Workers.

A graduate of the prestigious Moscow school of Painting, Sculpture, and Architecture, Melnikov in 1920 joined the Soviet parallel to the Bauhaus, the Higher State Artistic and Technical Studios (VKhUTEMAS), where the struggle for control over the direction of revolutionary architecture was fought until discussion was terminated by a new Stalinist orthodoxy. Melnikov refused to join either of the two competing architectural organizations, but remained closely associated with the Association of New Architects (ASNOVA), especially in his quest for a new "architectural language" for the age. Despite this association, his work influenced architects in both camps. Melnikov concerned himself with the functional demands of a building and with the rational organization of the composition. But he was most concerned with devising a unique expressive appearance that would unite spatial organization with innovative interior design, employing such forms that would make the buildings appear "as individualists against the general backdrop of urban building." Melnikov's architectural language consisted of elementary geometric forms such as cylinders, cones, and parallelepipeds. It is the cylinder that forms the basis for Melnikov's own home, built between 1927 and 1929 on Krivoarbatsky Lane off Moscow's famed Arbat.

In 1937 Melnikov was accused of practicing the grotesquerie of formalism and of obstructing and perverting the resolution of the problem of the type and form of Soviet architecture. He was driven from architectural practice.

Khan-Magomedov, Selim Omarovich. (1987). Pioneers of Soviet Architecture: The Search for New Solutions in the 1920s and 1930s. New York: Rizzoli.

Claude Nicolas Ledoux , LEDOUX, CLAUDE-NICOLAS (1736–1806), French architect. Ledoux was among the most prominent architects of the final decades of the ancien régime. Altho… Paul Marvin Rudolph , Paul Marvin Rudolph The American architect Paul Rudolph (born 1918) sought to integrate into modern architecture a spatial drama, a concern for urban… Modern Architecture , Through the nineteenth century and into the early twentieth century, neoclassical architecture predominated in much of Spanish America. In Europe, mo… Church (architecture) , church [Gr. kuriakon=belonging to the Lord], in architecture, a building for Christian worship. The earliest churches date from the late 3d cent.; be… Fumihiko Maki , Architect Fumihiko Maki (born 1928) came to prominence in the 1960s, a period of growth and vibrancy in Japanese architecture. Although still identif… Henry-russell Hitchcock , Hitchcock, Henry-Russell (1903–87). American architectural critic and historian. In 1929 he published Modern Architecture, the first English-language…