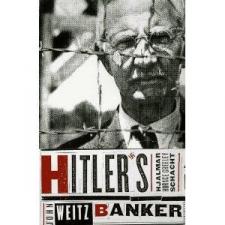 The German economist and banker Hjalmar Horace Greeley Schacht (1877-1970), widely admired and hated as Germany's "financial wizard," played a vital role in his country's economic recoveries after the inflation of 1923 and in the Hitler years.

Hjalmar Schacht was born in the small border town of Trigleff in German Schleswig on Jan. 22, 1877, shortly after his parents had returned from their emigration to America. After earning his doctorate in economics at the University of Kiel in 1900, he entered one of Germany's great Industrial "D"-banks, the Dresdener Bank, in 1903, where he remained for 13 years. During World War I he set up a new central bank in occupied Belgium to print and regulate the Occupation currency. At the end of the war—now director of the smaller National bank— Schacht participated in the founding of the new progressive liberal party, the Democratic party, to which he belonged until 1926.

Schacht first gained a national reputation when he became currency commissioner in 1923 and in that position played a vital role in the stabilization of the currency after the runaway inflation of 1922-1923 by the creation of the new Rentenmark. In December 1923 his fame as the "savior of mark" brought him an appointment to the presidency of the Central Bank, which he held until 1930. During this time he actively fought foreign credits, and in 1929 he took part in the negotiations for a new plan of reparations, the Young Plan. On his return from the conference, however, he immediately disowned the plan in the face of opposition by fellow nationalists. After the Hague Conference of March 1930 he resigned his position and openly blamed the German Republican government for the continuation of reparations in a pamphlet entitled End of Reparations (1931) and other writings. In October 1931 he was instrumental in the formation of the Harzburg Front, a loose coalition of industrialists, national conservatives, and Hitler, and in November 1932 he recommended to the old president of the republic, Paul von Hindenburg, that Hitler be appointed chancellor.

After the Nazi take-over, the grateful Hitler immediately reappointed Schacht to the Central Bank. From that position and from the office of minister of economics from 1934 to 1937, Schacht presided over Germany's second interwar recovery until, by 1938, mounting armament costs began to threaten his concept of a sound, balanced economy and brought on serious disagreement with Hitler. A blunt memorandum of warning in January 1939 brought his downfall and subsequent contacts with the Resistance. After the unsuccessful coup of July 1944 he was arrested but survived the end of the war and was found not guilty at the Nuremberg Trials. After the war he lived in retirement and was called upon for economic advice by several developing nations, most prominently by Indonesia and the Philippines. He died on June 4, 1970, in Munich.

Schacht's autobiography was published in the United States as Confessions of "The Old Wizard" (trans. 1956). His self-defense against implication with Nazi crimes is set down in his Account Settled (trans. 1949). He wrote once more about his life experiences and his general views on finance in The Magic of Money (trans. 1967). The best general biography in English is Edward N. Peterson, Hjalmar Schacht: For and against Hitler (1954), a fair-minded, well-documented account. Norbert Mühlen, Schact: Hitler's Magician (trans. 1938), is a bitterly critical portrayal of Schacht as a ruthless economic dictator by a prominent journalist. The most recent biographical study in English is Earl R. Beck, Verdict on Schacht (1956), which deals with the question of Schacht's guilt as Hitler's chief economist.