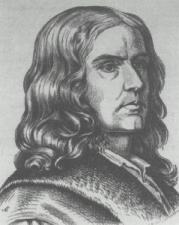 The Russian explorer Otto von Kotzebue (1787-1846) commanded two of the earliest Russian maritime expeditions which explored the Pacific and circumnavigated the world.

Otto von Kotzebue was born at Revel (Tallin), Estonia, on Dec. 30, 1787. He was the second son of the popular German dramatist and supposed agent of Czar Alexander I, August von Kotzebue, whose assassination on March 23, 1819, by the radical Karl Sand occasioned Metternich's reactionary Carlsbad Decrees. Between 1803 and 1806 Otto served as a cadet on the Nadezhda, the vessel in which Adam Ivan Krusenstern led the first Russian voyage of circumnavigation.

A keen sailor with a great interest in navigation, Kotzebue served in the Baltic after his return but was anxious to explore the Pacific islands which he had visited with Krusenstern. Impressed with his qualities, the latter recommended him to lead an expedition aimed partly at exploring the relationship between the Siberian and American mainlands and partly at gaining more information about the Pacific region.

Kotzebue sailed from Kronshtadt aboard the 180-ton Rurick on July 30, 1815, and rounded Cape Horn on Jan. 22, 1816. He visited Easter Island, the Tuomoto Archipelago, and some of the Marshall Islands before heading for North America, where he charted much of the coast of Alaska and discovered Kotzebue Sound. He returned to Russia via the Pacific, bringing with him a collection of plants and a body of ethnological information. He reached home on Aug. 3, 1818, and in 1821 published an account of his voyages.

Kotzebue's work attracted the attention of Czar Alexander I, who in March 1823 appointed him to undertake a mission partly for scientific purposes. His instructions, however, also ordered him to take cargo to Kamchatka, sailing from there to the northwest coast of America, where he was to protect the Russian American Company from foreign smugglers. Kotzebue had by now risen to the rank of post captain in the imperial navy, and he was given a larger ship, the Predpriate, with a complement of 144 men, compared to 20 on the Rurick.

Leaving Kronshtadt on July 28, 1823, and rounding Cape Horn on December 23, Kotzebue spent some months in the Pacific, visiting the Hawaiian Islands and Honolulu. Between March and August 1825 he watched over the affairs of the Russian American Company at New Archangel (Sitka) and then returned home via the Cape of Good Hope. He anchored at Kronshtadt on July 10, 1826, having added to Russia's knowledge of the Pacific and discovered some new islands in the Society and Marshall groups. His subsequent career is obscure. He died at Revel on Feb. 15, 1846.

Not much information is available on Kotzebue, but the best sources are the English translations of his two narratives: A Voyage of Discovery, into the South Sea and Bering's Straits for the Purpose of Exploring a North East Passage, 1815-1818 (2 vols., 1969) and A New Voyage Round the World in the Years 1823-1826 (3 vols., 1967). See also Mairin Mitchell, The Maritime History of Russia, 848-1948 (1949), and Sir Peter H. Buck, Explorers of the Pacific: European and American Discoveries in Polynesia (1953). □