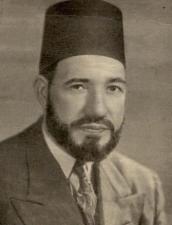 An Egyptian religious leader, Hassan Al-Banna (1906-1949) was the founder of the Muslim Brotherhood, which is considered the forerunner of contemporary movements of Islamic revivalism.

Hassan Al-Banna was born in the village of Mahmoudiyya, located northwest of the city of Cairo, to a traditional lower middle-class family. His father was a watch repairer and a teacher at the local mosque school where Al-Banna received his first lessons in Islam.

His religious inclination, activism, charismatic appeal, and leadership potential were evident from an early age. By the time he was 14 years old he had memorized the Koran, the holy book of Islam, and while still in secondary school he began to organize committees and societies stressing Islamic principles and morals. Later, while attending the Teacher's College in Cairo, Al-Banna attended lectures at the Al-Azhar, the foremost Islamic university, where he was exposed to current religious thought as well as to Sufism— Islamic mysticism—which opened a new inner dimension towards Islam and helped in forming his future beliefs. It was in the city of Isma'illiyya, where Al-Banna was given the job of grammar teacher, that he began to preach his ideas and won his first followers, who encouraged him to form the Society of the Muslim Brethren in 1928.

The association's activities were in fact a reaction to conditions in the Islamic world and in Egypt during the 1920s and 1930s. World War I had brought about the defeat of the Ottoman Empire and an end to the Caliphate, the symbol of Islamic power and unity for the Islamic world. Secularization and Westernization were becoming acceptable to the various governments that ruled Muslim nations. Egypt, which had been occupied by British troops since 1882 and was ruled by a corrupt government and ineffectual king, was undergoing deep structural changes caused by modernization underway since the 19th century reforms of Muhammad Ali Pasha. In turn, modernization was accompanied by the penetration of capitalism and industrialization. These two forces undermined traditional crafts, trade, and village life, resulting in social dislocations as well as a growing economic gap between the rich and poor of the country.

Furthermore, the accompanying process of secularization posed a real threat to Islam, because only where the Shari'a (Islamic law) was the established legal system could there be a true Islamic society and could Muslims live out their lives within the true faith. Traditional elements were also concerned by the threat posed to their society and traditions by Western ideas, press, cinema, theater, and other cultural practices.

During the second half of the 19th century Egypt had witnessed vigorous reformist efforts directed towards making Western thoughts and institutions more acceptable to Islamic society without undermining Islam itself. Such efforts had been led by important religious leaders such as Jamal Al-Din Al-Afghani, Muhammad Abdu, and Rashid Ridda. However, by the 1920s, with increasing political, social, and economic problems, Egypt witnessed a period of resurgence of conservative Islamic ideals. Al-Banna was the disciple of these earlier reformers; unlike them, however, he did not look for a way of compromise with Western ideas. What he called for was the institution of an Islamic state with a caliph as its leader and the Koran as the basis of its law.

The Ikhwan of the Muslim Brethren was to be the means of achieving these goals; the program reflected the ideas of Al-Banna, its "Supreme Guide," regarding social, religious, and economic matters. Among other things, it called for a moral society in Islamic terms and an end to Westernization. Since the ills of society were blamed on the habits of the Europeanized upper classes who preferred to wear Western clothes, speak European languages, and bring up their children according to Western customs, habits of the rich were to be combatted.

Economically the wrongs enforced upon the urban and rural masses would be corrected by calling attention to poor conditions in villages, enforcing the religious Zakat tax intended to enable all to share in the wealth of the few, preventing usury, and adjusting government salaries by eliminating the huge gaps between upper and lower level jobs, as well as public sharing in the profits of industrial and other monopoly companies. Special attention was to be given to the technical and social needs of workers so as to help raise their standard of living.

As for the social program, one of the main concerns of the Ikhwan was the breakdown in the traditional role of the family and in familial interrelationships. What with the growing poverty, immigration of rural masses to urban centers, and other dislocation in Egyptian society, the family, the basic unit of Islamic society, was breaking down and the young, widows, and older members were often left homeless. The state had not stepped in to fill the gap caused by this dislocation. The Ikhwan's program, therefore, called for safeguarding the family and family traditions through enforcement of morality by a ban on prostitution, alcohol, night-clubs, and theater productions of immoral nature and censorship of radio programs, newspapers, and books. The morality of women was to be guarded carefully, no association of the sexes before marriage would be allowed, and even though women were to be educated, schools would be segregated at all levels.

Activity on the Political Level

On the political side, the program was quite nationalist in orientation. It called for a one-party structure, a party that would have the good of the nation and not that of its membership at heart. The building of a strong national army would be given priority, and ties with the Islamic world strengthened. Government corruption would be put to an end and the bureaucratic structure made more efficient. The ulama class of scholars would find a place within the government by becoming employed by it in both the civil service and the army.

Thus the Ikhwan began as a religious association with the intent of fighting Westernization and re-instituting Muslim laws and morality. They were concerned with the social dislocations of their time and searched for an answer to them. Their program proved to be popular, particularly among the urban masses and the traditional elements of society, as well as with the young professionals and university graduates who were aware of the poor social and economic conditions of Egypt and of the government's inability to deal with them.

Al-Banna himself was one of the chief sources of the popularity of the Ikhwan, whose membership was conservatively estimated at one million in the 1930s. He was described as a charismatic leader, a man of conviction who inspired great faith in his followers. He was not a violent person; however, he brought into existence the Nizan Al-KhASS, the secret military arm of the Ikhwan which undertook various acts of terrorism, such as the 1952 burning of foreign and Jewish institutions in Cairo and the murder of Egypt's Prime Minister Al-Nuqrashi in 1948. The latter killing provoked the assassination of Al-Banna himself in 1949 at the hands of King Farouk's secret police. The king, who once was allied with Al-Banna, had now found him too dangerous and eliminated him, even though Al-Banna declared himself innocent of Nuqrashi's death.

After the death of the Supreme Guide, the Ikhwan went underground. There was a brief interval of friendship with the Nasser regime after the 1952 revolution, but in 1956, after a failed assassination attempt on the life of Nasser, the Ikhwan were driven underground once more. Since the ideas of the Ikhwan were more moderate than some other contemporary militant Islamic sects operating in Egypt, the Ikhwan were becoming more acceptable to the Egyptian people and government in the 1980s. The government, however, continued to refuse to recognize the Ikhwan as an official political party with the right to join the political process in the country.

Ayatollah Ruhollah Khomeini , Khomeini, Ayatollah Ruhollah Born on c. 1900 (Khomein, Persia) Religious leader of Iran Politician Ayatollah Ruhollah Khomeini was the leader of the… Jihad , Jihad The word jihad is derived from the Arabic root jahada, meaning "to strive" or "to exert oneself" toward some goal. In this general sense, jihad… Madrasa , Madrasa Madrasa, is an Islamic college, literally a "place of instruction," especially instruction in religious law. In medieval usage the term refer… Expansion , The expansion of Islam historically embraces two phenomena. The first is the expansion of Islamic states—that is, states whose ruling elite consisted… Islamic Militants , Palestine Islamic Jihad (PIJ) Palestine Islamic Jihad (PIJ) LEADERS: Fathi Abd al-Aziz Shaqaqi; Dr. Ramadan Abdullah al-Shallah YEAR ESTABLISHED OR B… Islamic Mysticism , There are a number of mystical movements within Islam, but by far the dominant tradition is that of Sufism, one of the most dynamic and interesting d…