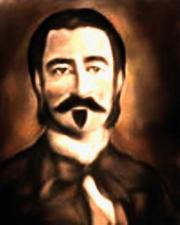 Buenaventura Baez (1812-1884) was five times president of the Dominican Republic and dominated his country's history for 3 decades.

Born of wealthy mulatto parents in Azua de Compostela, Buenaventura Baez was educated in Europe and returned to his homeland as one of the best-educated Dominicans of his day. He opposed continuation of Haitian rule over the eastern part of Hispaniola. By 1843, and after the ouster of the Haitian ruler Jean Pierre Boyer, this rule existed in name only. When the Dominican Republic declared independence, Baez became a member of the Dominican constitutional assembly and speaker of the first congress.

Baez was a compromise choice for president in 1849. At the end of his term in 1853, he handed over power to his legally chosen successor, Pedro Santana—one of the rare times in Dominican history when this happened. Thereafter, Santana and Baez became implacable enemies, and Baez was soon exiled and did not return until 1856. In the personalistic manner of Dominican politics, this feud dominated the country's political life as the two leaders' followers struggled for control.

By 1855 Santana's harsh rule had caused a revolt, and he resigned. Baez returned and maneuvered himself into the presidency. Naturally, his first move was to exile Santana.

A revolt by tobacco growers in the Cibao Valley sent Baez into exile in Curaçao in June 1858, and Santana replaced him as president as the Dominican Republic entered the era of Spanish rule known as the Third Spanish Colony. The Dominican War of the Restoration against Spain began in 1863. After much fighting, the last Spanish troops departed in July 1865. A constitutional assembly elected Baez president, and he entered his third term on Nov. 14, 1865. However, by early May 1866 the country was again in revolt, and Baez returned to Curaçao.

Before Baez claimed the presidency for the fourth time, in May 1868, the Dominican government had made serious efforts to lease the Bay of Samaná area, one of the world's great natural harbors, to the U.S. government. Baez went even further, attempting to have his country annexed by the United States. On Nov. 29, 1869, representatives of both governments signed two treaties in Santo Domingo, one leasing the Bay of Samaná and the other annexing the Dominican Republic. In spite of a questionable Dominican plebiscite in favor of the annexation and U.S. President Ulysses S. Grant's firm support, U.S. Senate opposition killed the treaty. The lease treaty lapsed, and finally in December 1872 Baez rented the Samaná peninsula to an American corporation for $150,000 a year. The contract was rescinded a few months later, and by the end of 1873 Baez was toppled by yet another revolution.

The next few years were very confused; 1876 saw four presidents, the last being Baez as he started his fifth and final term in December. By February 1878 he was again in exile, this time in Mayagüez, Puerto Rico, where he died on March 21, 1884.