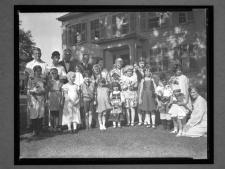 John Erskine, 1509–91, Scottish reformer, called Erskine of Dun. After several years on the Continent he returned to Scotland, where he introduced the study of Greek in Scottish schools. He was the friend and firm supporter of John Knox and George Wishart. Erskine was a witness at the marriage (1557) of Mary Queen of Scots to Francis II of France and a participant in the coronation (1567) of James VI at Stirling. As a member of a noble family and a person of gracious manner, he was a valuable intermediary between the reforming party and Mary and, later, James. Although a layman, he was several times moderator of the general assembly of the Scottish Reformed Church. In 1578 he took part in compiling the Second Book of Discipline and in 1579 became a member of the king's council.

John Erskine, 1879–1951, American educator, author, and musician, b. New York City, grad. Columbia (B.A., 1900; Ph.D., 1903). He taught first at Amherst (1903–9) and then at Columbia, becoming professor of English in 1916. Among his many works on literature and music are The Literary Discipline (1923), The Delight of Great Books (1928), and What Is Music? (1944); he also edited scholarly works and served as coeditor of The Cambridge History of American Literature. He is best known for his delightful, satiric novels based on legend, including The Private Life of Helen of Troy (1925) and Galahad (1926). In his late 40s he began appearing as a concert pianist and from 1928 to 1937 was president of the Juilliard School of Music.

John Erskine, 1721?–1803, Scottish theologian. A leader of the evangelical party in the Church of Scotland, he was minister successively at Kirkintilloch, Culross, and New Greyfriars Church, Edinburgh, until, in 1767, he became the colleague of Dr. William Robertson at Old Greyfriars. He corresponded with many representatives of foreign churches, including Jonathan Edwards, whose works he edited and published in Great Britain.

Church Of Scotland , Scotland, Church of The origins of the Church of Scotland are not to be found in 1560, but much earlier, if not with the Scottish Lollards, at least… John Taverner , TAVERNER, JOHN Tudor organist and composer of Masses and motets;b. Tattershall?, England, c. 1495; d. Boston, Lincolnshire, Oct. 25, 1545. His name a… John Whitgift , Anglican divine; b. Lincolnshire, 1532; d. London, 1604. While still young, Whitgift embraced the principles of the Reformation and was strengthened… Heinrich Bullinger , Bullinger, Heinrich (1504–1575) BULLINGER, HEINRICH (1504–1575) BULLINGER, HEINRICH (1504–1575), Swiss reformer, theologian, and church leader. Born… John Calvin , CALVIN, JOHN CALVIN, JOHN (Jean Cauvin; 1509–1564), French theologian and reformer. Calvin was the leading second-generation Protestant reformer, yie… John Of Salisbury , Political theorist, historian, philosopher, humanist of the twelfth century renaissance, and Bishop of Chartres; b. Old Sarum, near Salisbury, c. 111…