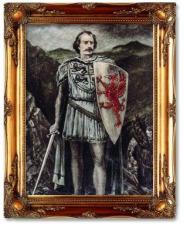 oxford
views updated
Gruffydd ap Llywelyn (d. 1063), king of Gwynedd and Powys (1039–63). The son of Llywelyn ap Seisyll, king of Gwynedd, and Angharad, the king of Deheubarth's daughter, Gruffydd created a personal dominion over much of Wales in alliance with English and Scandinavians. He was later said to be slow and listless as a youth, but he grew into an ambitious warlord who won Gwynedd and Powys in battle (1039) and defeated the Mercians on the river Severn. His conquests in Deheubarth took longer (1040–55), during which he slew two of its kings. His alliance with Earl Ælfgar of Mercia, whose daughter he married, sustained a long struggle with Harold Godwineson (later Harold II), and Bishop Leofgar of Hereford also led an army against him (1056). To a Welsh chronicler he was ‘the head and shield and defender of the Britons’. Harold's attack on Gruffydd's court at Rhuddlan (1062) caused him to flee, and soon afterwards (5 August 1063) he was killed by his own men; his territorial dominion collapsed at the same time.

William Lyon Mackenzie King , William Lyon Mackenzie King (1874-1950) was prime minister of Canada for more than 21 years, a longer period in office than any other first minister… Zedekiah , ZEDEKIAH , the name of several biblical figures. (1) The son of Chenaanah, one of the prophets of Samaria in the time of *Ahab king of Israel and *Je… Martin Luther King Jr , Martin Luther King, Jr. 1929-1968 Civil rights leader At a Glance… Montgomery Bus Boycott SCLC Formed Birmingham Protest March “I Have a Dream” Votin… Jehu , Jehu JEHU (Heb. יֵהוּא), son of Jehoshaphat son of Nimshi (ii Kings 9–10); reigned over the Israelite kingdom at Samaria for 28 years (c. 842–814 b.c… Stephen King , King, Stephen Portland, Maine American author Stephen King is a very popular author of horror fiction. In his works he blends elements of the traditi… Minos , Minos In Greek mythology, King Minos of Crete was best known for building the Labyrinth—a complicated network of passages—to imprison the monstrous M…