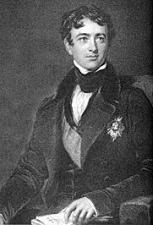 oxford
views updated
Minto, Gilbert Elliot-Murray-Kynynmound, 1st Earl (1751–1814). Minto was educated in Paris under the supervision of David Hume and at Oxford. He was called to the bar in 1774 and entered Parliament in 1776 in the Whig interest. He was a close friend of Edmund Burke and assisted him in the impeachment proceedings against Warren Hastings. He was appointed governor of Corsica in 1794, envoy to the court of Vienna from 1799 to 1801, and president of the Board of Control for East India Affairs in 1805. In 1806 he became governor-general of India. His period in office saw the consolidation of British power in the subcontinent and, in prosecution of the Napoleonic wars, the extension of influence into south-east Asia. He dealt with the threat of Ranjit Singh's Sikh kingdom and captured Java and the Moluccas from the Dutch—although the latter were subsequently returned. He retired in 1813.