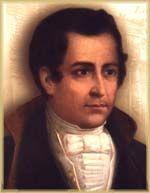 One of Argentina's founding fathers, Mariano Moreno (1778-1811) was a leading figure in the first phase of the country's independence movement. The zealous Moreno advocated Argentine independence and a strong central government. His uncompromising ways eventually led to exile, but not before he had put in place many of the foundations for a new nation.

The city of Buenos Aires was the capital of the Spanish Viceroyalty of the Rio de la Plata when Mariano Moreno was born there on September 23, 1778. Rio de la Plata comprised present day Argentina, Uraguay, Paraguay and much of Bolivia. Moreno was the oldest of 14 children born to Manuel Moreno, a Spanish immigrant of moderate means, and Ana Maria Valle, a local woman. Moreno was sickly during much of his life and almost died of smallpox at the age of eight. The disease left his face permanently scarred.

An intelligent boy, Moreno attended a local public school. In 1790, he entered the Colegio de San Carlos in Buenos Aires. While studying there, he was befriended by monks at a nearby Franciscan monestary. Moreno spent many hours in the monastery's library, where he was introduced to the radical ideas of the French Enlightenment. In 1799, with support from the Franciscans, Moreno traveled to Chuquisaca in upper Peru (now Sucre, Bolivia). He enrolled in the University of Chuquisaca, where he studied theology and law. His family hoped that Moreno would enter the priesthood. A liberal-minded priest and theology instructor befriended Moreno and gave him access to a library of works by foreign thinkers, books that were essentially banned to the public. Moreno absorbed many liberal ideas from these books. Between bouts of illness, Moreno completed his undergraduate and graduate studies at the university. He became concerned about the poor conditions of the Andean indians and, in 1802, published his thesis entitled Juridical Dissertation about the Personal Service of Indians. The paper protested Spanish policies of forced labor in the Andes Mountain region.

Moreno earned a Doctor of Law degree in 1804. He bypassed the priesthood and established a law practice in Chuquisaca. Soon after starting his practice, he married Maria Guadalupe Cuenca. In 1805 the couple had a son, Mariano.

Moreno's unorthodox ways were already attracting attention. Moreno was challenged to duels over some unpopular legal cases he handled. When he refused to duel, he was threatened with death. These threats led the family to move to Buenos Aires, where Moreno obtained legal work with the Audiencia, or Royal Court.

During these early years of the 19th century, an independence movement was growing in South America as Spanish colonies sought to separate from their European rulers. British armies, which were fighting the French and Spanish, invaded Buenos Aires twice during 1806-07. But they were successfully turned back by a militia unit formed by legal personnel of the Royal Court, including Moreno. Although Moreno's name was on the petition to form the militia, it is not believed that he actually fought in the battles. Defeat of the British armies fueled the independence movement.

Though he worked for the Royal Court, Moreno supported an unsuccessful junta attempt to overthrow viceroy Santiago Liniers in 1808. Liniers was replaced by Baltasar Hidalgo de Cisneros in 1809. Cisneros named Moreno his personal legal advisor. Later that year, Moreno published Representacion de los Hacendados (Petition of the Ranchers), in which he defended the opening of the port of Buenos Aires to British trade. Moreno argued that free trade would revive the economy. Many credit Moreno's argument with Cisneros' decision to open the port later that year. But its value goes beyond the immediate debate. In his 1931 book, A History of the Argentine Republic, F. A. Kirkpatrick said the pamphlet condemned "the colonial mercantile system and its opportune exposition of liberal economic principles." Tension built in the region until May 1810 when a bloodless coup led by Cornelio Saavedra overthrew the viceroy and established a junta of creoles, or American-born Spaniards. Saavedra served as the junta's president.

Although Moreno is revered for the prominent part he played in the revolution, his exact role is uncertain. As in the 1806 militia rolls, his name is conspicuously absent from the list of revolutionaries in the 1810 coup, leading some historians to question his desire for independence.

Nonetheless, Moreno was appointed one of two secretaries in the junta. His was a very powerful position in which he was responsible for all political, diplomatic and military affairs of the new government. In July 1810, Cisneros and his followers sought to take back the government from the revolutionaries. Their revolt was unsuccessful and Moreno, without consulting the junta, ordered the revolutionaries executed. Many members of the junta opposed this decision and the government became divided.

Moreno drew more criticism in late 1810 when he published his Plan of Operations. The plan advocated mass arrests, exile and execution of counter-revolutionaries, bypassing normal legal proceedings. The document also recommended annexing southern Brazil on the grounds that it was ethnically and economically similar to Buenos Aires. Such a move most certainly would have led to war with Portugal.

The rift between Moreno and the junta's conservative members grew. The junta feared that Moreno, who already had vast power, was seeking to become a dictator. The rift widened when Moreno sought to strip Saavedro of the "regal" trappings of his position. Although Moreno won this argument, he and Saavedro again clashed when Moreno opposed representation of the interior provinces on the junta. This proved to be the final showdown between the two strong-minded revolutionaries. Moreno advocated absolute control by Buenos Aires; he believed the interior provinces were too conservative and would weaken the new government. But on December 10, 1810, the interior provinces gained representation on the junta.

An angry Moreno resigned as secretary of the junta. Because the junta still considered him a threat, it ordered him to a diplomatic position in Great Britain. Moreno boarded a British frigate in January 1811, but he died en route on March 4. He was 32. His body, wrapped in a British flag, was buried at sea.

Remembered for Many Initiatives

Despite his controversial opinions, Moreno initiated a wide range of policies that earned him a place among Argentina's founding fathers. He founded the fledgling nation's first public library, which became the Argentine National Library. He decreed freedom of the press and edited the Gaceta de Buenos Aires (Buenos Aires Gazette), a weekly newspaper in which he published his liberal ideas about Argentine independence. Moreno also expanded the militia, established a military academy, and built a munitions industry. He advocated legal equality for Indians. These foundations on which the young nation was founded were put in place in the seven months in which Moreno held the position of secretary. Though he remains surrounded by controversy, the country's liberals hold Moreno in high esteem for these accomplishments and his role in the independence movement.

Manuel Belgrano , Manuel Belgrano The Argentine political figure and revolutionary general Manuel Belgrano (1770-1820) is considered one of the founders of the Argenti… Simon Bolivar , Simón Bolívar (1783-1830) was a South American general and statesman who brought political independence to six present-day nations. Called the Libera… BROWNING, ORVILLE HICKMAN , Air Force, U.S. OverviewPredecessors of, 1907–46Since 1947 Air Force, U.S.: Overview The U.S. Air Force, the world's most powerful air arm, was not a… Eugenio Maria De Hostos , Eugenio María de Hostos (1839-1903) was a major Puerto Rican social philosopher, educator, and writer. His lifelong mission was to create a Spanish W… Bernardino Rivadavia , Bernardino Rivadavia Bernardino Rivadavia (1780-1845) was a leader in Argentina's efforts to secure independence and after the break with Spain intro… Bartolome Mitre , Bartolomé Mitre (1821-1906) was Argentina's first constitutional president and the leading historian of the country. Son of a middle-rank Buenos Aire…