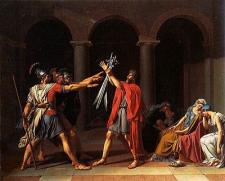 According to Roman legend, the Horatii were triplets who defended Rome against Alba Longa. To avoid a costly battle, the two cities decided to settle their dispute with a duel between champions from each side.

The Horatii brothers fought against triplets from Alba Longa called the Curiatii. After two of the Horatii were killed, the third, Publius Horatius, pretended to flee. The Curiatii pursued him but could not stay together because of their wounds. Horatius turned and attacked them one at a time and killed all three. Although Horatius won the contest, his sister was overcome with grief. She had been engaged to one of the Curiatii, and she wept when she realized her brother had killed her husband-to-be. Seeing her tears, Horatius stabbed her, saying, "So perish any Roman woman who mourns the enemy."

Horatius was sentenced to die for his act, but he successfully appealed to the people to spare his life. Some scholars believe that the story was created to explain the origin of the Roman tradition by which condemned prisoners could appeal to the public to avoid a death sentence.

Myths and Legends of the World

"Horatii ." Myths and Legends of the World . . Encyclopedia.com. (February 15, 2020). https://www.encyclopedia.com/humanities/news-wires-white-papers-and-books/horatii

"Horatii ." Myths and Legends of the World . . Retrieved February 15, 2020 from Encyclopedia.com: https://www.encyclopedia.com/humanities/news-wires-white-papers-and-books/horatii

Carthage , The destruction of Carthage in 146 bce ended the Third Punic War (149–146). It the violent anticlimax to more than a century of conflict between Rome… Attila , Attila Attila (died 453) was a chieftain who brought the Huns to their greatest strength and who posed a grave threat to the Roman Empire. The Huns f… Romans , Romans In the New Testament, a letter by Saint Paul to the Christians of Rome. It was written in c.ad 57, probably while Paul was in Corinth. He decl… Romulus , Nationality/Culture Pronunciation ROM-yuh-luhs and REE-muhs Alternate Names Appears In Ovid's Metamorphoses Lineage Character Overview In Roman mytho… Alaric , Alaric Alaric (ca. 370-410) was a leader of the Visigoths who clashed repeatedly with the Roman Empire and led his troops in the sack of Rome in 410.… Mars (god) , Mars Mars was a major Roman deity, second only to Jupiter* in the Roman pantheon. He began as a protector of agriculture but later became the god of…