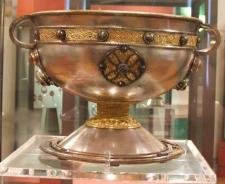 oxford
views updated
Celtic art Artworks produced by Celts during the prehistoric La Tène period. For convenience, this period is normally subdivided into four periods: Early Style (after c.480 bc); Waldalgesheim style (after c.350 bc); plastic style (after c.290 bc); and Hungarian sword style (after c.190 bc). Its chief characteristic was swirling, abstract design, which found its fullest expression in metalwork and jewellery. The term is sometimes also applied to the La Tène-influenced early Christian art of w Europe, such as the Book of Kells.

Persian Art And Architecture , Persian art and architecture, works of art and structures produced in the region of Asia traditionally known as Persia and now called Iran. Bounded b… Biedermeier , Biedermeier (bē´dərmīər), name applied, at first in a joking spirit, to a period of European culture and a style of furniture, decoration, and art or… American Art , American art American art, the art of the North American colonies and of the United States. There are separate articles on American architecture, Nor… Rococo , Rococo ROCOCO. A style of art characteristic of the eighteenth century, its focal point was France, where it was the dominant style during the first… Art Nouveau , art nouveau (är´ nōōvō´), decorative-art movement centered in Western Europe. It began in the 1880s as a reaction against the historical emphasis of… Martial Arts , In the United States, martial arts are mostly defined as fighting skills. However, in ancient and oriental countries, martial artists practiced these…