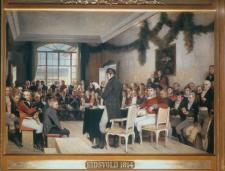 oxford
views updated
Scandinavian art Art in the Nordic countries dates back to the end of the Ice Age, when the first rock carvings were made. There was a tendency to use intricate interlacing patterns, which reached a peak in the stonework and wood-carving of the Viking period (c.800–c.1050). Throughout the Middle Ages and beyond, Scandinavian art was in the shadow of other European cultures. It was only at the end of the 18th century that artists of international standing began to emerge. Chief among these was Edvard Munch.