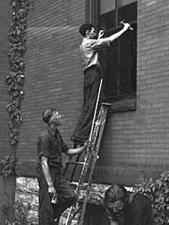 YOUTH ADMINISTRATION, NATIONAL (NYA) was established by executive order on 26 June 1935 as a division of the Works Progress Administration (WPA). It remained under WPA jurisdiction until 1939, then the Federal Security Agency became its home until September 1943, when it dissolved. The depression of the 1930s brought special hardship to American youth, preventing large numbers from entering the labor market and denying them the opportunity to attain or upgrade skills. President Franklin D. Roosevelt, influenced by his wife, Eleanor, and by WPA Director Harry L. Hopkins, established the NYA to devise useful work for some of the estimated 2.8 million young people who were on relief in 1935. NYA activities took two major directions: the student work program for youths in school (elementary to graduate), and out-of-school employment for the needy unemployed between the ages of sixteen and twenty-four.

The student work program eventually helped 2.1 million students find jobs in school laboratories, libraries, and playgrounds, at wages ranging from a maximum of $6 per month for secondary pupils to $30 per month for graduate students. Because most projects were inadequately supervised and tended to be irregular and of short duration, those who insisted on tangible evidence of achievement from relief activities criticized the in-school program as a waste of taxpayer dollars. The out-of-school program ultimately aided 2.6 million people. Those participating in the program received on-the-job training in the construction trades, metal and woodworking, office work, recreation, health care, and other occupations. NYA workers also performed useful tasks in parks, national forests, and other outdoor recreational areas along lines similar to the Civilian Conservation Corps. In the cities, enrollees resided at home, but the NYA established resident centers for group projects in rural areas. Because out-of-school NYA programs focused on skills development and visibly productive work, they were less criticized.

The NYA brought desperately needed relief to a vital sector of the American population at minimal expense. The average annual cost to the federal government of the student program was about $75 per enrollee, and the out-of-school worker cost the government about $225 annually. In an average year (such as 1938), the NYA employed about 500,000 youths—150,000 in school and the rest in the community—at a total cost of about $58 million. It was a minimal investment in the skills and self-respect of young people, but the program was nonetheless unpopular with congressional conservatives, in part because of the strong liberalism of NYA Director Aubrey Williams. Despite partisan criticism, the NYA was remarkable for its absence of political overtones. Unlike much of the New Deal, the agency was almost completely decentralized, with many of the projects being administered by states and communities.

Lewiston: Geography and Climate , Lewiston: Economy Major Industries and Commercial Activity Once known mainly for the manufacture of shoes and textiles, Lewiston and Auburn today pos… Bachelors In Education , Bachelors in Education With a teacher shortage affecting schools across America, there’s never been a better time to earn a bachelor’s in education d… American Legion , The American Legion is a wartime veterans' organization that was chartered by Congress in 1919. The American Legion has almost three million members… Getting An Education , Chapter 6: Getting an Education THE NO CHILD LEFT BEHIND ACT THE COST OF PUBLIC EDUCATION PREPRIMARY SCHOOL ELEMENTARY AND SECONDARY SCHOOL HIGHER ED… Boulder , Boulder: Economy Major Industries and Commercial Activity The predominant industries in the Boulder are science and technology related. Helped out by… Civilian Conservation Corps , The Civilian Conservation Corps (CCC) was a program established by President Franklin D. Roosevelt (1882–1945; served 1933–45) and his New Deal progr…