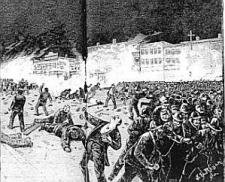 The Haymarket Square riot was a bloody confrontation between Chicago police and protesting workers. The state repression that followed in its wake left a permanent mark on U.S. and international politics. On May 4, 1886, a group of workers met in Haymarket Square in Chicago to protest an earlier police attack on workers that had left six people dead. The city had recently been the center of a bitter nationwide fight concerning the right of workers to an eight-hour workday.

Approximately three thousand workers turned out for the Haymarket protest. The mayor of Chicago, Carter Harrison (1825–1893), attended the meeting and informed police officials that the audience and the speakers were peaceful. The mayor and most of the workers left by 10:20 p.m., when a light rain set in. Only 500 workers remained when 180 Chicago policemen arrived to disband the meeting. A police official who had been in political conflict with the mayor ordered the immediate evacuation of the public square.

Just after the evacuation command was shouted, a dynamite bomb was thrown into the midst of the police. Whether the bomb was thrown by an agent provocateur or a worker has never been determined. The police responded with indiscriminate gunfire, killing both police officers and workers in the square. By morning almost all of the deaths in Haymarket Square had been blamed on labor leaders. This was the story reported by major newspapers, both locally and nationally, and it was the conclusion immediately reached by law enforcement officials.

Although there was no evidence linking them to the crime, eight prominent labor leaders and anarchists were arrested and tried for murder. The judge instructed the jury that evidence linking them to the deaths in Haymarket Square was not necessary for conviction. After a blatantly biased trial, seven of the men were found guilty and sentenced to death. Four men—Albert Parsons, August Spies, George Engel, and Adolph Fischer—were hanged on November 11, 1887, a date commemorated long after as Black Friday. The dominant media of the time portrayed the trial, the verdict, and the executions as triumphs of law and order.

The impact of the Haymarket Square riot, both on the labor movement and on American politics, was long-lasting. In the short term the Haymarket incident, after interpretation by the media, sparked America’s first red scare. Locally Chicago police banned public meetings and attacked labor leaders, anarchists, and socialists. The fact that four men had been executed for the public expression of controversial ideas had a negative effect on all of these groups. Nationally there was wider coordinated repression of such groups. Haymarket was blamed for destroying the Knights of Labor, then America’s largest and most inclusive labor union.

In the long run, however, the impact in the United States and internationally was more positive. The Haymarket narrative dramatized what came to be called “the Chicago idea,” which was that large labor unions could take concerted action to change economic, social, and political conditions. In addition the incident directly inspired the careers of future labor leaders, such as Bill Haywood (1869–1928) and Emma Goldman (1869–1940). The execution of the men, who became known as “the martyrs of Chicago,” not only inspired labor leaders globally but also led to the designation of May 1 as an international labor holiday. In short, the Haymarket massacre resonated long afterward as an enduring symbol of the heroic age of the labor movement.

Green, James. 2006. Death in the Haymarket: A Story of Chicago, the First Labor Movement, and the Bombing That Divided Gilded Age America. New York: Pantheon.

Terence Vincent Powderly , Terence Powderly (1849–1924) was born in Pennsylvania in 1849 to a family of poor Irish immigrants. He rose to become one of the major leaders of U.S… Migrant Labor , migrant labor, term applied in the United States to laborers who travel from place to place harvesting crops that must be picked as soon as they ripe… Boston Police Strike 1919 , Synopsis To protest poor working conditions and low pay, the Boston police unionized and affiliated with the American Federation of Labor (AFL). Bost… Working Class , the construction of a class identity class and solidarity radical artisans and industrial workers gender the left and the right reformist and revolut… May Day , MAY DAY. Although May Day was observed as a rite of spring in Europe for centuries, it became associated in the late nineteenth century as a workers'… Haymarket Riot , In the Haymarket Riot of May 4, 1886, the police clashed violently with militant anarchists and labor movement protesters in Chicago. Seven policemen…