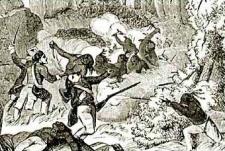 DUNMORE'S WAR (1774) resulted from competion between American Indians and white colonists for control of the trans-Ohio region. Tensions between Virginians and Pennsylvanians, who vied for possession of the fort at Pittsburgh, exacerbated the conflicts. Early in 1774 an agent of the royal governor of Virginia, the Earl of Dun-more, took possession of Fort Pitt, renamed it Fort Dun-more, and initiated attacks against local Indian settlements. The Delawares, under the influence of Moravian missionaries, kept the peace, but the Shawnees pressed for war. On 10 June the governor called out the militia of southwest Virginia, which, under Gen. Andrew Lewis, prepared for an expedition to the Shawnee towns beyond the Ohio.

Early in August the militia of Frederick County, Virginia, raided the Wapatomica towns on the Muskingum River. Dunmore advanced in person to Fort Dunmore, where he called on the neighboring militia to join in an expedition against the Shawnees. Before he could join Lewis, Shawnee warriors attacked Lewis's division on 10 October. After an all-day battle at Point Pleasant, Lewis won a decisive victory. The Shawnees fled to their Ohio towns, and the chiefs sought Dunmore's camp and offered peace. Dunmore marched to the Pickaway Plains, where he established Camp Charlotte and made a treaty, which was sealed by the delivery of hostages. For the colonists who participated, this victory provided valuable military experience that would benefit the soldiers during the Revolutionary War. For the American Indian groups, defeat intensified resentment over white encroachment and heightened the stakes in competition for the Ohio Valley.