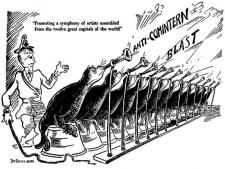 The Anti-Comintern Pact was signed by Germany and Japan on November 25, 1936, and joined by Italy on November 6, 1937. Disguised as an effort to combat the influence of the Communist International (Comintern), the treaty was intended to serve as a military alliance aimed at the Soviet Union. In reality, the treaty did not result in any coordinated German-Japanese military action, but instead became the foundation for growing distrust and betrayal between the two fascist allies themselves.

The text of the treaty was brief and to the point. It asserted that the Communist International was a threat to world peace and that the signatories planned to "keep each other informed concerning the activities" of the Comintern and cooperate in their mutual defense, and invited other nations to join their efforts. A Supplementary Protocol empowered Germany and Japan to "take stringent measures against those who at home or abroad work" for the Comintern, authorizing repressive measures against members of the Communist Party in Germany, Japan, or countries under their influence. Finally, both promised not to sign a separate agreement with the Soviet Union without the other being informed. Viscount Kintomo Mushakoji, the Japanese ambassador to Germany, and Joachim von Ribbentrop, German ambassador to London, signed the treaty. It went into force immediately and was valid for five years.

The Anti-Comintern Pact threatened the USSR and seemed to be one more aspect of Germany's aggressive policy. Nevertheless, the German and Japanese military staffs did not coordinate their actions, and each country pursued its own interests irrespective of the Anti-Comintern Pact.

In 1939, while the Soviet army was defeating the Japanese military in Manchuria along the Mongolian border, Ribbentrop traveled to Moscow and negotiated the Nazi-Soviet Non-Aggression Pact, leaving the Japanese out of these deliberations. Japan could not trust Hitler. In 1941, again without notice, Germany invaded the USSR. Japan decided not to assist its ally in the Anti-Comintern Pact and eventually attacked the United States instead of the USSR.

Haslam, Jonathan. (1992). The Soviet Union and the Threat from the East, 1933–41: Moscow, Tokyo, and the Prelude to the Pacific War. Pittsburgh, PA: University of Pittsburgh Press.

Relations With Cuba , Cuba, Relations with The Cuban Communist Party began its frequently interrupted existence in 1925. Classically aligned with Moscow, the Cuban communi… Nobusuke Kishi , Nobusuke Kishi (1896-1987) was a Japanese statesman who was imprisoned as a war criminal but released by the Allied Occupation authorities after Worl… Koreans In Japan , ETHNONYMS: Chösenjin (North Koreans), Kankokujin (South Koreans) At present, there are 700,000 Koreans in Japan, three-fourths of whom were born in a… Helmut Kohl , Ludwigshafen, Germany German chancellor H elmut Kohl became the chancellor of West Germany in the early 1980s. After West Germany and East Germany re… Yalta Conference , The Yalta Conference was held February 4 to 11, 1945, near the end of World War II (1939–45). British Prime Minister Winston Churchill (1874–1965), S… William Weatherford , World War II (1939–45) CausesMilitary and Diplomatic CourseDomestic CoursePostwar ImpactChanging Interpretations World War II (1939–45): Causes The e…