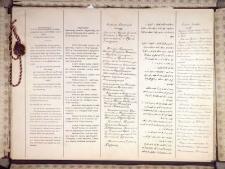 Treaty by which Iran ceded its territories in the Caucasus to Russia.

The Treaty of Turkmanchai concluded a war between Iran and Russia that Iran initiated in 1826 with the aim of recovering territory in the Caucasus region that it had lost to Russia in 1813. The war went very badly for Iran, which was forced to accept unfavorable peace terms in the treaty signed in the village of Turkmanchai, about 80 miles southeast of Tabriz, on 21 February 1828. Under the treaty, Iran ceded its remaining provinces north of the Aras River (Yerevan and Nakhichevan) to Russia; extended preferential trade rights to Russian subjects; recognized Russia's exclusive naval rights in the Caspian Sea; accepted the application of Russian law to Russian subjects in Iran involved in civil or criminal legal cases; and agreed to pay Russia an indemnity of 20 million rubles.


Lambton, Ann K. S. "Persian Trade under the Early Qajars." In Islam and the Trade of Asia: A Colloquium, edited by D. S. Richards. Philadelphia: University of Pennsylvania Press, 1970.

Partitions Of Poland , partitions of Poland: The basic causes leading to the three successive partitions (1772, 1793, 1795) that eliminated Poland from the map were the dec… Treaty Of Brussels , Brussels, treaty of Christopher N. Lanigan Fath Ali Shah , Fath Ali Shah (fäth älē´ shä´, fät), also spelled Feth Ali Shah, 1762–1834, shah of Persia (1797–1834), nephew and successor of Aga Muhammad Khan, fo… Russia Company , In the early modern period, different branches of international trade were controlled by large groups of merchants linked in a single company with it… Treaty Of Nystadt , Nystadt, Treaty of The Treaty of Nystadt was signed on August 30 (September 10, O.S.), 1721, in the Finnish town of Nystadt. It ended the twenty-one… Relations With Sweden , Sweden, Relations with The establishment, starting in the late eighth century, of a number of Swedish settlements in the eastern Baltic led to regula…