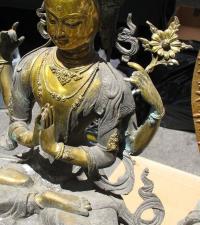 Dōgen was the founder of Sōtō Zen Buddhism and helped introduce to medieval Japan many features of Chan Buddhist theory and practice that developed during the Song dynasty in China. His major works include the Shōbōgenzō (Treasury of the true dharma-eye), a collection of sermons composed in vernacular Japanese from 1231 until the end of his life; the Shōbōgenzō Zuimonki (Miscellaneous talks), another collection of vernacular sermons compiled from 1234 until 1238; the Eihei Kōroku (Recorded sayings at Eiheiji Temple), a collection of sermons in Chinese compiled from 1236 to 1252; the Fukanzazengi (Universal recommendation for Zazen practice), a concise summary of his views on meditation composed in 1233; and the Eihei Shingi (Monastic rules at Eiheiji Temple), a collection of six essays dealing with monastic rules and regulations composed from 1237 to 1249.

Dōgen is often referred to as the leading philosopher in Japanese history. His writings on many Buddhist topics reflect an approach to religious experience based on a more philosophically oriented level of analysis than is found in the writings of most thinkers in Zen, which is known as a "special transmission outside the scriptures, without reliance on words and letters." Dōgen has been a major influence on modern Japanese philosophy, especially representatives of the Kyoto School such as Nishida Kitarō, Nishitani Keiji, and Abe Masao, and has been compared with a wide range of classical and modern Western philosophers and religious thinkers ranging from Aristotle and St. Thomas Aquinas to Martin Heidegger, Friedrich Nietzsche, and Jacques Derrida.

Some of Dōgen's major philosophical ideas emphasize that philosophy of religion must reflect personal experience of transient existence based on an awareness that the ultimate reality of the universal Buddha-nature is not beyond but is conditioned by impermanence. Impermanent reality is characterized by a fundamental unity of being-time (uji ) in that all beings occur as temporal manifestations and time is manifested through each aspect of existence. Dōgen maintains that religious practice, or training, and spiritual realization, or the attainment of enlightenment, occur simultaneously and are inseparable in the experience of liberation known as "the casting off of body-mind" (shinjin datsuraku ) that is achieved through the methods of zazen meditation and kōan interpretation, which are equally conducive to realization. He also stresses that the naturalist dimension of being-time and impermanence-Buddha-nature is expressible through poetry and aesthetics, but reminds that karmic causality or moral conditioning and retribution are inherent to, rather than outside of, the attainment of enlightenment.

Much of Dōgen's emphasis on impermanence is based on his own experiences. According to the traditional accounts Dōgen was born into an aristocratic family at a time when Japan was beginning to be plagued by repeated civil warfare. He experienced profound sorrow at an early age as his father and mother died by the time he was seven. It is said that when Dōgen saw the smoke rising from incense and vanishing during his mother's funeral, he was deeply moved by an awareness of the inevitability of death and the pervasiveness of ephemeral reality.

The orphaned Dōgen decided to renounce secular life in pursuit of the Buddhist dharma. At first, he studied on Mount Hiei outside the capital city of Kyoto in the dominant Japanese Tendai church, in which the central doctrine was an affirmation of "original enlightenment" (hongaku ) or the inherent potentiality of all beings to attain the primordial Buddha-nature. However, at the age of thirteen Dōgen had a fundamental "doubt" about the doctrine of original enlightenment: If everyone is already enlightened in that they possess the Buddha-nature, he thought, then what is the need for sustained meditative practice as required by the Buddha's teaching?

Unable to resolve this doubt in Japan, Dōgen traveled to China, where the contemplative path of Zen had become the dominant movement. At first, Dōgen was disappointed in the laxity of the Chinese Chan monks, who failed to inspire him. Then, on the verge of returning to Japan unfulfilled, he met the teacher Rujing, who insisted on an unrelenting approach to meditation. Under the guidance of his new mentor Dōgen attained an awakening experience of the casting off of body-mind, or a continuing process of liberation from all intellectual and volitional attachments, which signified the resolution of his doubt about the necessity of continuously renewed training.

Before his breakthrough experience Dōgen apparently presumed the conventional dichotomies between past, present, and future, now and then, life and death, impermanence and nirvana, time and eternity, and finitude and Buddha-nature. He thought that human beings were bound to a realm of death and impermanence and that enlightenment was beyond this realm. However, in casting off body-mind he realized that a single moment encompasses the unity of practice and attainment, so that practice is not before—nor does it lead up to—enlightenment and enlightenment is not a teleological goal reached only at the end of practice. Rather, as Dōgen writes in the Shōbōgenzō, "[p]ractice and realization are identical. Because one's present practice is practice in realization, one's initial negotiation of the Way in itself is the whole of original realization.… As it is already realization in practice, realization is endless; as it is practice in realization, practice in beginningless" (Dōgen, Dōgen Zenji Zenshū, vol. 2, pp. 546–547).

On returning to Japan, in 1233 Dōgen established the Sōtō sect at Kōshōji temple in the Kyoto area, but because of sectarian disputes with Tendai and other Zen factions he eventually moved in 1243 to the remote, pristine mountains of Echizen (now Fukui) Province, where Eiheiji temple was constructed. According to Dōgen's writings of the late period, every action generates a retributive consequence, and only authentic repentance and acknowledgment of one's guilt can offset the effects of evil karma. Still, by emphasizing the moment-to-moment cause-and-effect process of karmic retribution—which is inseparable from nirvana as part of the Bodhisattva's commitment to compassion—Dōgen is consistent with his earlier philosophy of being-time.

A central feature of aesthetic realization is Dōgen's use of poetic language, especially elaborate metaphors and philosophical wordplay, to convey emotional fulfillment that enhances rather than opposes the enlightenment experience of detachment from worldly, materialistic concerns. One of Dōgen's most eloquent poems was written near the end of his life as he returned from Echizen to the capital city for medical care. Making the journey to see Kyoto for the first time in ten years, but for what would prove to be the last time, Dōgen wrote in the five-line, thirty-one-syllable waka form:

Dogen, the founder of the Soto branch of Zen, was born to an aristocratic family in medieval Japan. His father died when he was two and his mother, five years later. He grew up with a deep awareness of the ephemeral nature of life and the inevitability of death. He turned from the successful life that his birth granted him to study Buddhism at the Tendai temple on Mt. Hiei. Tendai belief centered upon the potential already possessed by each person for attaining universal enlightenment. To Dogen, that belief seemed to contradict the Buddha's admonitions to engage in lengthy meditative practice.

Unable to find anyone who could help him with his dilemma, he traveled to China where Zen Buddhism had risen to prominence. He was initially discouraged by the lack of intensity that seemed to characterize the Zen monks he first encountered, but finally located a teacher, Rujing, who advocated the ideal of sustained meditative practice. Sitting with him, Dogen had an initial awakening, termed "shinjin datsuraku," or the casting off of body-mind, a liberation from intellectual and volitional attachments. Many doubts about the value of continuous practice were set aside. He returned to Japan and established what would be known as the Soto sect in Kyoto, but found that the other Zen practitioners and his former Tendai cohorts considered him a disruptive influence, and he withdrew to the mountainous area of what is now Fukui Province and founded the Eiheiji temple, the center of Soto Zen to this day.

Dogen is generally associated with two major ideas. First, his experience of shinjin datsuraku gave him a new mystical under-standing of the time/eternity dichotomy. He understood that enlightenment was not something to be sought in the future, a goal to be reached as a result of meditative practice. Rather, he came to understand the unity of practice and enlightenment in the moment.

Second, toward the end of his life, he devoted time to a discussion of ethics and an understanding of karma or consequences. Every action yields a consequence. Bad karma must be handled with repentance and the acknowledgment of guilt. This process of canceling bad karma is to be dealt with in the context of practice and the realizations that accompany it.

Dogen committed his ideas to writing primarily in Shobogenzo (Treasury of the true Dharma-Eye), a classic of Zen literature, but there are also collections of his talks and sayings. A two-volume collection of his writings in English was published in 1971.