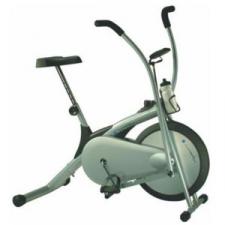 Georgia-born Angelo Gianni was bitten by the music bug at an early age, playing in rock bands as a teen. Gianni was raised in Connecticut but when it came time to go to college, he returned to the South. During his time at University of South Carolina Film School, Gianni met drummer Tony Lee. Together they formed a band called Root Cellar, playing the usual college hangouts—coffeehouses and clubs. In 1993 they

Treadmill Trackstar, based in Columbia, SC, were one of the first two bands signed to Breaking Records, a Colum bia-based imprint founded by the band Hootie and the Blowfish in early 1997 and affiliated with Atlantic Records; the band evolved in 1994 from Angelo Gianni’s desire to release a CD; released their debut album, Excessive Use of the Passive Voice, on Raging Rose Records in 1995; released first album Only This for Breaking Records in 1997; opened for Hootie and the Blowfish, Matthew Sweet, and Dillon Fence in 1996.

disbanded, Lee moved to Los Angeles to pursue a career in film editing, while Gianni remained in South Carolina and tried (unsuccessfully) to form a new band. After a short period of playing on his own, Gianni coaxed Lee from California and Treadmill Trackstar evolved in 1994. Treadmill Trackstar released their debut album, Excessive Use of the Passive Voice, on the Columbia-based Raging Rose Records in 1995. When the album was recorded, the band didn’t really exist: Gianni simply asked some musician friends to help him record the album in the studio.

The various musicians on Excessive Use of the Passive Voice included Dan Cook from the band Lay Quiet Awhile, John Furr from Blightobody, Todd Garland, Tony Lee, and original cellist Heidi Brown. Gianni decided he needed a band to promote the record and to tour, so he played acoustic gigs with Heidi Brown at local venues while searching for his future bandmates. He placed advertisements in four cities, and the result was that he met bassist Chris Grigg. The remainder of the band then fit easily into place.

When describing the band’s sound, Brian McCollum of the Detroit Free Press appropriately wrote, “Treadmill takes the acoustic sound, steps on the distortion pedal, pushes a warm cello to the front of the mix, and sets the energy knob just a hair below ‘full blown’. The result is a colorful gush of grassroots pop.”

Excessive Use of the Passive Voice includes an eighty-page companion book of poems and short stories for order which, at first glance, seemed to have little to do with the album’s lyrics, yet all of the material was tied together in a philosophical way. Angelo Gianni told Dave Lucas of the Free Times, “The way I was thinking about it was I may only get to make one CD my whole life, so we better put as much stuff on there as we can.”

The album also included spoken-word poetry and fictional tales after the music, and additional story material was inserted in the liner notes. Gianni also read Bob Mould’s “Too Far Down” near the close of the album. Treadmill Trackstar plans to incorporate film at their future live performances, and to utilize visual themes that could accompany their harmonies or lyrics.

Gianni told Lucas, “Almost everything I write has got to do with… futility, sort of, and feeling trapped in situations.” Excessive Use of the Passive Voice opens with thirty seconds of silence, and then the album begins with the sound of Gianni croaking the lyrics to “Singing in the Rain” as if on his deathbed. The album’s songs range from loose and raucous to sublimely delicate and slightly despondent. The band’s first album featured cellist Heidi Brown, but she grew tired of the band’s excessive touring and decided to replace herself with her longtime high school friend, cellist Katie Hamilton, who had never played in a rock band before. Brown’s departure was announced just weeks before the band was slated to record its first album for Atlantic’s Breaking Records in January of 1997.

Songs like “Virgin S. and the Mechanic” clearly set Treadmill Trackstar apart from the pop and alternative rock fray by highlighting memorable, intelligent lyrics that seem to linger long after the song has ended. “Pale Bright Sun,” for example, on Excessive Use of the Passive Voice contains all of the trappings of solid pop sensibility and thorough musical craftsmanship.

Treadmill Trackstar thanked Charleston’s hard-edged rock band Muthafist in their CD’s liner notes, which was a clear nod of thanks for their musical inspiration; other musical influences include Bob Dylan’s songwriting and lyrics, and the rollicking, driving musical sound of the Stone Temple Pilots.

Treadmill Trackstar is, to a remarkable degree, a diligent touring band with a thirst for the road. After their debut album was released, band members became veritable touring machines similar to Jack Kerouac’s “On the Road” character, Dean Moriarity, covering more than 90,000 miles in a nonstop tour in 1996. The band covered the south and much of the midwest and even needed to replace their first truck. While touring, band members often lived on a meager five dollars a day, subsided mainly on fast food, watched television in their truck, slept in basements, and even slept on pool tables. Yet the experience, which would seem grinding to many others, was viewed as a great adventure by Treadmill Trackstar. The band opened for Hootie and the Blowfish, Matthew Sweet, and Dillon Fence while on tour.

After touring, Gianni told The State’s Michael Miller, “I’ve only been apart from my bandmates for five days this month, and sometimes it gets hard to deal with the same people for hours and hours a day for weeks at a time. But we’ve learned to deal with that, and I think we’re a closer-knit unit than we’ve ever been.” Treadmill Trackstar released Only This, their first album for the Breaking Records label, in the fall of 1997. Based upon the band’s history and dedication, it was worth the wait. The album contains songs that reflect Treadmill Track-star’s emotional range. According to Thorn Owens’ All Music Guide website review, Only This is “a record that’s melodic and often enchanting.”

With their major label debut in circulation, Treadmill Trackstar is becoming a more widely recognized band. Constant touring and their participation in the R.O.A.R. tour in the summer of 1997 brought their music to new audiences. Treadmill Trackstar has also opened for more mainstream artists and bands, including Hootie and the Blowfish, Matthew Sweet, and Edwin McCain. This extensive touring and constant motion would tire the average person, but not the members of Treadmill Trackstar. They give no indication of slowing their pace. In his interview with Dave Lucas, Angelo Gianni summed it up: “It’s just fun traveling and playing new places.”

Excessive Use of the Passive Voice, Raging Rose Records, 1995.

Only This, Breaking Records/Atlantic Records, 1997.

Jay Farrar , Wilco Alternative country group For the Record… Selected discography Sources When the progressive country band Uncle Tupelo broke apart in 1994, one… Christine Mcvie , Fleetwood Mac Pop/rock group For the Record… Selected discography Sources Although Fleetwood Mac is today recognized as one of the most successful po… Robbie Robertson , "They brought us in touch with the place where we all had to live," Greil Marcus wrote in Mystery Train. Thirty years after The Band's first appearan… Catherine Wheel , Catherine Wheel Rock band Commented Catherine Wheel’s lead singer Rob Dickinson in a Web site interview with David S. Faris: “Believe it or not, we’r… Soundgarden , Soundgarden Rock Band Soundgarden is one of several new heavy metal acts to emerge from the Seattle area since 1985. After years of trial-and-error r… Galactic , Galactic Funk group For the Record… Selected discography Sources Born out of the intense heat, oppressive humidity, and unique rhythmic sense that ma…