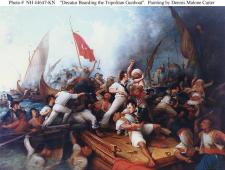 While the captive American sailors languished, the U.S. minister to France, Thomas Jefferson, tried to enlist Portugal, Naples, Sardinia, and Russia in an alliance against Algiers. France refused to cooperate. In 1793, Britain promulgated a fraudulent treaty between Algiers and Portugal, after which Algiers captured a dozen American ships and over 100 American sailors. American envoys negotiated a treaty in 1795, pledging an annual tribute in naval supplies, and a frigate as a gift to the dey, or ruler, of Algiers. Richard O'Brien, captive in Algiers since 1785, negotiated similar treaties with Tunis and Tripoli.

But the United States was slow to send tribute. When Jefferson became president in 1801, Tripoli's Pasha Yusuf Qaramanli, demanding his tribute, had all but declared war. Although Jefferson, determined to cut military spending, had sold or decommissioned most of the U.S. Navy's ships, he sent what was left to the Mediterranean with instructions to cooperate with Sweden, Sicily, Malta, Portugal, and Morocco against Tripoli. This coalition forced Qaramanli to back down, ultimately giving the United States a victory, even with a minimal navy.

For two years a small U.S. squadron (one frigate and its consorts) patrolled the Tripolitan coast. When the frigate USS Philadelphia ran aground in October 1803, Tripoli captured the 300 men on board and prepared to use the ship against the Americans. Jefferson's political opponents accused him of fighting a war without sufficient resources, but Lt. Stephen Decatur silenced the critics in February 1804 when he entered Tripoli Harbor with a small crew and burned the Philadelphia. Decatur, promoted to captain, became a national hero; the navy increased its bombardments of Tripoli.

William Eaton, American consul to Tunis, proposed an alliance with Ahmed Qaramanli, Yusuf's brother, whom the pasha had deposed in 1795. Eaton organized an army of Arabs, Greeks, and U.S. Marines to reinstall Ahmed as ruler, in the expectation that he would make a favorable treaty with the United States. Jefferson neither supported the plan nor discouraged it. Eaton's force marched from Egypt to the city of Derne, which it captured in June 1805, just as the United States made peace with Yusuf. The government ransomed the Philadelphia's crew, and Tripoli promised not to attack American ships. The diplomatic results were less impressive than the patriotic effusions in the United States: paintings, songs, poems, plays, and statues celebrated America's victory over its Muslim enemies.

In 1807, Algiers declared war on the United States, but the embargo and the War of 1812 kept American shipping out of the Mediterranean. In 1815, the Madison administration sent Decatur to settle the dispute. Algiers promised not to take American ships, and a few months later an English fleet forced Algiers to renounce attacks on European shipping. Great Britain no longer needed Algiers to fight its enemies. In 1830, France invaded Algiers, beginning a century of European colonization in North Africa.
[See also Marine Corps, U.S.: 1775–1865; Navy, U.S.: 1783–1865.]