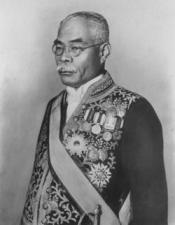 Seiyukai (sā´yōōkī´), Japanese political party, founded in 1900. It was derived, via the Kenseito (see Minseito) from the Jiyuto, organized by Taisuke Itagaki in 1881. Under the astute political leadership of Takashi Hara, it was the most powerful party in Japan from 1900 to 1921. Hirobumi Ito was its first president, and Kimmochi Saionji its second, but these great statesmen were more powerful in their own right than as party leaders. The first real party cabinet, marking the decline of the old genro oligarchy, was formed by Takashi Hara in 1918. Party governments prevailed from 1924 to 1932, the Seiyukai cabinets of Giichi Tanaka (1927–29) and Ki Inukai (1931–32) alternating with Minseito governments. After this the influence of political parties steadily declined as that of the militarists increased. Japanese parties have been based more on factionalism and personal loyalty than on divisions of principle. The Seiyukai was generally conservative and acceded to bureaucratic and military control more willingly than the Minseito. After World War II, the Seiyukai reappeared, under the leadership of Kijuro Shidehara, as the Progressive party, the most conservative major political party in postwar Japan. The Progressives were later absorbed into the business-oriented Liberal Democratic party. The Seiyukai was traditionally identified with the Mitsui financial interests.

Minseito (mēn´sā´tō), Japanese political party. It is usually called the Liberal party in English. Founded by Shigenobu Okuma in 1882 as the Kaishinto, or Progressive party, it was dissolved in 1884, reformed into the Shimpoto, and merged with the Jiyuto (see Seiyukai) in 1898 to form the Kenseito. Okuma later took his group out of the Kenseito and set up the Kenseihonto, which became the Kokuminto in 1910. A faction of the Kokuminto joined Taro Katsura's Doshikai in 1913 and became the nucleus of the Kenseikai. In 1927 the Kenseikai was reorganized as the Minseito. The cabinets of Takaaki Kato (1924–26), Reijiro Wakatsuki (1926–27, 1931), and Osachi Hamaguchi (1929–31) were Kenseikai or Minseito governments. All parties were dissolved in 1940. After World War II, the Minseito reemerged under the leadership of Shigeru Yoshida and Ichiro Hatoyama as the Liberal party, one of the two strong conservative groups in postwar Japan. It merged with the Democrats in 1955 to form the Liberal Democratic party. The Minseito was traditionally identified with the Mitsubishi financial interests.

Morris Hillquit , Morris Hillquit Morris Hillquit (1869-1933), Russian-born American lawyer and author, figured prominently in the organization of the Socialist Party… Liberal Party (england) , The Liberal Party (Partido Liberal) was one of the two traditional political parties in Paraguay. Arising out of the political confusion of the mid-1… Baath Party , Ba'ath party (bä´äth), Arab political party, in Syria and in Iraq. Its main ideological objectives are secularism, socialism, and pan-Arab unionism.… Eisaku Sato , Eisaku Sato (1901-1975) was a Japanese political leader who served as prime minister longer than anyone else in Japanese history. Under his leadershi… Communist Party , Communist party, in Russia and the Soviet Union, political party that until 1991 exercised all effective power within the Soviet Union, and, as the o… Tory , Tory (tô´rē), English political party. The term was originally applied to outlaws in Ireland and was adopted as a derogatory name for supporters of t…