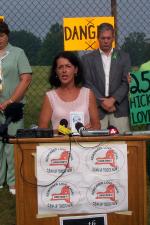 Gibbs, Lois Grassroots Environmental Activist and The "Mother of Superfund" (1951–)

Gibbs, Lois GRASSROOTS ENVIRONMENTAL ACTIVIST AND THE "MOTHER OF SUPERFUND" (1951–)


Lois Gibbs is a leading activist in defending the public from the dangers of toxic waste. In 1978, she discovered that her neighborhood of Love Canal in Niagara Falls, New York, was built on top of 21,000 tons of hazardous chemical waste. Faced with the health threat to her family and community, Gibbs transformed from a shy housewife to the antipollution activist now known as the "mother of Superfund." Superfund, or the Comprehensive Environmental Response, Compensation, and Liability Act (CERCLA), is the federal program to clean up toxic waste sites. Her work through the Center for Health, Environment and Justice (CHEJ) helps grassroots organizations nationwide demand accountability from industrial polluters and the U.S. government.

Love Canal was the brainchild of William T. Love, an entrepreneur who wanted to link the upper and lower Niagara River for a hydroelectric power project in the late 1800s. Halted by an economic depression, the sixty-foot-wide by three-thousand-foot-long pit became a dump site for the Niagara Falls municipality, the U.S. Army, and the Hooker Chemical Corporation. After the pit was filled to capacity and covered with topsoil, Hooker sold the land to the Niagara Falls Board of Education. A school and single-family homes were built on the site in the 1950s.

In 1978, after reading a Niagara Gazette series on local hazardous waste problems, Gibbs wondered if her son's epilepsy , urinary tract, and respiratory problems could be traced to his school's location on the former Love Canal dump site. She began petitioning for the closure of the elementary school, and gained the support of fellow concerned neighbors and friends. In the process, Gibbs learned about other health problems in the community—including liver disorders, blood disease, asthma, and urinary problems—and of residents' fears that their homes would soon be worthless, trapping them in the polluted neighborhood. In August 1978, Gibbs and two neighbors took the petition with 161 signatures to the Commissioner of the State Department of Health, who immediately closed the school and recommended that pregnant women and children living close to the school leave the area. Within a week of that meeting, President Jimmy Carter declared Love Canal a federal emergency area, or emergency declaration area (EDA), and allocated funds to relocate the 239 families living in the first two rings of homes around the school.

But another level of struggle was about to begin. In Gibbs' memoir, Love Canal: My Story, she relates the two-year nightmare for the neighbors remaining on the canal. The cleanup effort to drain toxins from the area only released more dangerous chemicals. As president of the Love Canal Homeowners Association, Gibbs spearheaded a fight to get the government to purchase Love Canal homes at a fair price. Dramatic events of 1980, a key election year, forced government action. The U.S. Environmental Protection Agency (EPA) released its study showing that residents exhibited chromosomal damage and angry Love Canal residents took two EPA representatives hostage. Gibbs took the Democratic National Convention by surprise in order to appeal for mortgage assistance for the residents of Love Canal. Her tenacious work publicized the severity of the pollution problem at Love Canal that inaction by Congress and President Carter would have had a political cost. President Carter finally agreed to fund permanent relocations for all Love Canal families, and the federal Superfund program was established to clean up toxic waste sites similar to Love Canal. Superfund would serve to enforce strict polluter liability so that no company could abandon a site as Hooker attempted to do in the case of Love Canal.


An activist dedicated to protecting communities from hazardous wastes, Lois Gibbs began her political career as a housewife and homeowner near the Love Canal , New York. She was born in Buffalo on June 25, 1951, the daughter of a bricklayer and a full-time homemaker. Gibbs was 21 and a mother when she and her husband bought their house near a buried dump containing hazardous materials from industry and the military, including wastes from the research and manufacture of chemical weapons.

From the time the first articles about Love Canal began appearing in newspapers in 1978, Gibbs has petitioned for state and federal assistance. She began when she discovered the school her son was attending had been built directly on top of the buried canal. Her son had developed epilepsy and there were many similar, unexplained disorders among other children at the school, yet the superintendent was refusing to transfer anyone. The New York State Health Department then held a series of public meetings in which officials appeared more committed to minimizing the community perception of the problem than to solving the problem itself. The governor made promises he was unable to keep, and Gibbs herself was flown to Washington to appear at the White House for what she later decided was little more than political grandstanding. In the book she wrote about her experience, Love Canal: My Story, Gibbs describes her frustration and her increasing disillusionment with government, as the threats to the health of both adults and children in the community became more obvious and as it became clearer that no one would be able to move because no one could sell their homes.

While state and federal agencies delayed, the media took an increasing interest in their plight, and Gibbs became more involved in political action. To force federal action, Gibbs and a crowd of supporters took two officers from the Environmental Protection Agency (EPA) hostage. A group of heavily armed FBI agents occupied the building across the street and gave her seven minutes before they stormed the offices of the Homeowners' Association, where the men were being held. With less than two minutes left in the countdown, Gibbs appeared outside and released the hostages in front of a national television audience. By the middle of the next week, the EPA had announced that the Federal Disaster Assistance Administration would fund immediate evacuation for everyone in the area.

But the families who left the Love Canal area still could not sell their homes, and Gibbs fought to force the federal government to purchase them and underwrite low-interest loans. After she accused President Jimmy Carter of inaction on a national talk show, in the midst of an approaching election, he agreed to purchase the homes. But he refused to meet with her to discuss the loans. Carter signed the appropriations bill in a televised ceremony at the Democratic National Convention in New York City, and Gibbs simply walked onstage in the middle of it and repeated her request for mortgage assistance. The president could do nothing but promise his political support, and the assistance she had been asking for was soon provided.

Gibbs was divorced soon after her family left the Love Canal area. She moved to Washington D.C. with her two children and founded the Citizen's Clearinghouse for Hazardous Wastes in 1981 (later renamed the Center for Health, Environment and Justice in 1997). Its purpose is to assist communities in fighting toxic waste problems, particularly plans for toxic waste dumping sites, and the organization has worked with over 7,000 neighborhood and community groups. Gibbs has also published Dying from Dioxin, A Citizen's Guide to Reclaiming Our Health and Rebuilding Democracy. She has appeared on many television and radio shows and has been featured in hundreds of newspaper and magazine articles. Gibbs has also been the subject of several documentaries and television movies. She often speaks at conferences and seminars and has been honored with numerous awards, including the prestigious Goldman Environmental Prize in 1991. Because of Gibbs' activist work, no commercial sites for hazardous wastes have been opened in the United States since 1978.

Nelson Aldrich Rockefeller , ROCKEFELLER, Nelson Aldrich (b. 8 July 1908 in Bar Harbor, Maine; d. 26 January 1979 in New York City), governor of New York throughout the 1960s who… Landfill , A landfill is a large area of land or an excavated site that is designed and built to receive wastes. There were 3,536 active municipal landfills in… Solid Waste , The garbage that is managed by local governments is known as municipal solid waste (MSW). Specifically, MSW is waste generated by commercial and hous… United States Department Of Health And Human Services , The United States Department of Health and Human Services (USDHHS) was officially created by President Jimmy Carter in 1980, when the Department of E… Environmental Justice , Does every income, racial, ethnic, and age group have an equal right to protection from environmental hazards? This question is central to the emotio… Federal National Mortgage Association , The Federal National Mortgage Association (known colloquially as Fannie Mae) is the largest U.S. corporation. With an overall value of nearly $1 tril…