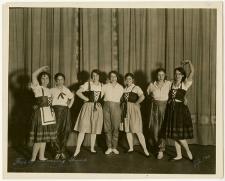 YOUNG MEN'S AND YOUNG WOMEN'S HEBREW ASSOCIATION. The first Young Men's Hebrew Association (YMHA) was organized in 1854in Baltimore to develop Jewish community life. The facilities of early YMHAs consisted mainly of reading rooms, and the first paid worker was generally the librarian. The YMHAs differed from social clubs in that they were careful to ban card playing, gambling, and drinking. Immediately after the Civil War, YMHAs began to develop rapidly, especially in the South and Midwest. The sponsors of these associations were much impressed with the popularity of the Young Men's Christian Association (YMCA), and the YMHAs followed suit when the YMCAs introduced sports, health, and other physical education activities. From their early days, YMHAs included Jews of all shades of opinion and belief. Provision was also made for non-Jews as members. When Jewish immigrants from eastern Europe came to America in unprecedented numbers between 1881 and 1910, the YMHAs offered classes in citizenship and English, and at the same time expanded their Jewish educational and cultural activities. On 2 November 1913, the Council of Young Men's Hebrew and Kindred Associations (YMHKA) formed to coordinate the efforts of the YMHAs. During World War I, the group raised funds to secure rabbis for service at military posts. In 1917, the YMHKA created the Jewish Welfare Board (JWB) to develop an infrastructure to support Jewish military personnel.

While many of the YMHAs had auxiliaries to serve the needs of Jewish women, the first independent Young Women's Hebrew Association (YWHA) began in New York City in 1902 under the leadership of Mrs. Israel Unterberg. Like Jewish settlement houses, the YWHA aimed to strengthen the Jewish community by focusing on the religious, mental, and physical lives of immigrant and working-class Jewish women. It offered courses in Hebrew, English, bookkeeping, dressmaking, gymnastics, basketball, tennis, and swimming. The physical education classes proved especially popular. Membership in the YWHA jumped from 30,000 in 1906 to 102,000 in 1913 and the all-female board of directors began opening new branches to meet the additional demand for facilities. By the 1920s, the YWHA had become heavily involved in promoting sporting activities for women. The New York branch hosted many national swimming competitions and, in 1924, the Women's Swimming Association meet became the first athletic event to be officiated entirely by women.

Community , antiquity middle ages Character and Structures Functions and Duties Individual Centers the muslim caliphate in the east the muslim countries in the w… Johannesburg , JOHANNESBURG , largest city in the Republic of *South Africa; center of the world's most important gold producing industry. The city was founded in 1… Miami (river) , DAYTON , city in S.W. Ohio. Dayton's Jewish population in the mid-1990s was estimated to be 5,500 and by 2005 some 5,000 in a total population of aro… Glasgow , GLASGOW , city in S.W. Scotland. The first Jew to settle in the city was Isaac Cohen in 1812; however there was no sizable community or synagogue unt… MELBOURNE , MELBOURNE MELBOURNE , capital of Victoria, Australia. The 15 Port Phillip Association members who founded Melbourne in 1835 included two Jews. Melbou… Pittsburgh , PITTSBURGH , a leading industrial city in western Pennsylvania; in a metropolitan region of 2,500,000, the estimated Jewish population of Greater Pit…