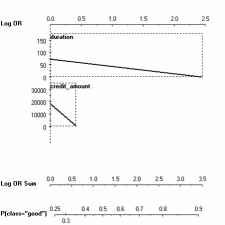 EXTENSIONS TO POLYCHOTOMOUS AND MULTIVARIABLE SITUATIONS

There are three different ways to derive or view the logistic regression model. In the first approach, one assumes that there is an unobserved or latent variable related to the observed outcome. For example, an individual’s decision to enter the labor force is made by comparing his or her unobserved reservation wage to the market wage. Only if the market wage exceeds the reservation wage does the individual enter the labor force. Secondly, the model can be viewed as a probability model for the dependent variable. Thirdly, the model can be derived from random utility theory or discrete choice model formulation (see McFadden 1974).

In the binary case, some event Y either occurs (Y = 1) or not (Y = 0). The linear probability regression model (LPM) is given by:

The logistic regression model was formulated to address these issues and can be written as:

The probability P is now nonlinear in X. The effect of changes in X on the probability P are the smallest at the extreme points of the variable X or when P is close to 0 or 1, which makes sense in most applications. In addition, the effect of a unit change in a specific X on P now depends on all of the independent variables X. The appropriate estimation method for the logistic model is the maximum likelihood estimation (MLE) method, since only Y and not P is observed. The MLE estimates are consistent and asymptotically normal and efficient. In addition, the standard likelihood ratio and Wald tests on the coefficients can be used. Since this is a nonlinear model, the marginal effect of X on Y can be estimated using either the point of means of the variables or by averaging the marginal effect over all of the sample observations. The standard measures of goodness of fit are overly pessimistic in this model, and other measures that are used include the count R-squared statistic, which gives the average correct predictions of the model over the two outcomes of Y, or the pseudo R-squared statistic, which is the likelihood ratio statistic comparing the general model with the restricted model where all of the slope parameters (β1 = β2 =…. βk = 0) are zero.

EXTENSIONS TO POLYCHOTOMOUS AND MULTIVARIABLE SITUATIONS

There are several approaches to modeling the polychotomous (more than two categories) case, including the multinomial logistic model. Similarly, the multivariate logistic model may be used in the modeling of two or more choice variables. Other relevant distinctions are made among ordered, unordered, and sequential choice variables. An individual choosing among no work, part-time work, or full-time work is facing an ordered variable. The choice of mode of daily transportation by car, bus, train, or bicycle is an example of an unordered variable. The decision of a high school graduate to attend college or not and then, if college is chosen, to decide on a major program is an example of a sequential choice variable.

A problematic feature of the multinomial logistic model is the property of independence from irrelevant alternatives (IIA). The IIA property states that the choice between any two alternatives is made independent of the remaining alternatives. In situations where there are close substitutes in the set of alternatives, this property is unlikely to hold true. In the mode of transportation example, adding a blue bus to the choice set affects all of the probabilities assigned to each category. Thus, by adding enough buses of different colors, one can make the probability of driving a car arbitrarily small. One can formally test for IIA in the multinomial logistic model or use other models, such as the multinomial probit model, which does not have this property. Unlike the dichotomous single variable situation, there are now major differences between the logistic and probit models and many more types of models to choose from.

Berkson, Joseph. 1944. Application to the Logistic Function to Bio-Assay. Journal of the American Statistical Association 39: 357–365.

oxford
views updated
logistic regression (or logit regression) A form of regression analysis that is specifically tailored to the situation in which the dependent variable is dichotomous (or binary). For example, among a sample of people under investigation, a researcher might be interested in what factors are associated with the likelihood of someone being employed rather than unemployed, receiving university education or not receiving university education, or voting Republican rather than Democrat. However, so-called multinomial logistic regression is increasingly common, involving analyses in which the possible causal effects of independent variables on a categoric dependent variable having three (rarely more than three) outcome categories are assessed via comparison of a series of dichotomous outcomes: for example, the probability of someone identifying themselves as lower class rather than middle class or upper class (taken together); as compared with the probability of someone claiming an upper-class rather than a middle-class or lower-class identification (again with these last two taken together).

The results of logistic regression models can be expressed in the form of odds ratios, telling us how much change there is in the probability of being unemployed, receiving university education, voting Republican (or whatever), given a unit change in any other given variable–but holding all other variables in the analysis constant. More simply, the results (as measured by the changed odds on being found in a particular category) tell us how much a hypothesized cause has affected this outcome, taking the role of all other hypothesized causes into account.

Most published accounts of research using this particular technique report three statistics for the models. The first of these is the beta (parameter estimate or standardized regression coefficient), which is–crudely speaking–a measure of the size of the effect that an independent variable (let us say social class) has on a dependent variable (for example the probability of being found in employment rather than among the unemployed), after the effects of another variable (such as educational attainment) have been taken into account. The standard error provides us with a means of judging the accuracy of our predictions about the effect in question. One rule of thumb is that the beta should be at least twice the size of the standard error. Finally, many investigators include the odds ratios themselves, since these tend to make the relative probabilities being described in the model intuitively easier to grasp.

For a short introduction to the technique see Anthony Walsh , Statistics for the Social Sciences (1990)
. A more advanced discussion will be found in J. Aldridge and and F. Nelson , Linear Probability, Logit, and Probit Models (1984)
.

Bayes Theorem , With one posthumous publication on probability, Reverend Thomas Bayes inspired the development of a new approach to statistical inference known as Ba… Multicollinearity , Multicollinearity BIBLIOGRAPHY A multiple regression is said to exhibit multicollinearity when the explanatory variables are correlated with one anot… Bayesian Statistics , Bayesian statistics is concerned with the relationships among conditional and unconditional probabilities. Suppose the sampling space is a bag filled… Linear Models (statistics) , Linear regression refers to a linear estimation of the relationship between a dependent variable and one or more independent variables. Social resear… Central Limit Theorem , The central limit theorem (CLT) is a fundamental result from statistics. It states that the sum of a large number of independent identically distribu… White Noise , There are uncertainties in dynamics of social and natural processes. Basic approaches of statistical analysis model these processes based on theoreti…