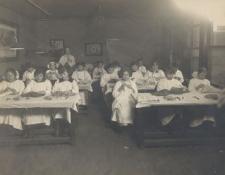 Social settlements, or settlement houses, are centers for neighborhood social services and social reform activities typically located in densely populated urban areas. During the Progressive Era (1890–1920), educated reformers established settlement houses in low-income communities with the goals of bridging the widening gap between social classes, providing essential neighborhood services, and solving pressing urban social problems. The settlement movement grew in scope and political influence until World War I. Despite waning popularity in the conservative postwar era, the social settlements themselves, and the institutions and policies they built, continue to advocate for children and families well into the twenty-first century.

The social settlement movement began with the 1884 founding of Toynbee Hall in London's East End slums by parish priest Samuel Barnett and his wife, Henrietta. Toynbee Hall established opportunities for British intellectuals to reside in and study the urban problems of London's impoverished Jewish and Irish neighborhoods. Shortly after its founding, American reformers Stanton Coit and Jane Addams went to visit Toynbee Hall. They returned with the mission of bringing the social settlement movement to the United States. Coit proceeded to establish the Neighborhood Guild in 1886 on the Lower East Side of New York City. Addams and her friend Ellen Gates Starr purchased the famed Hull-House on Chicago's West Side in 1889. The settlement movement quickly spread throughout urban centers of the country; by 1910, there were roughly four hundred social settlements nationwide.

The settlement movement was responding to an array of urban social problems stemming from massive immigration and overcrowding, unrestrained capitalism, and the severe economic depression of 1893. Social settlement residents, who were primarily wealthy, white, well-educated women, strove to fulfill a "neighborhood ideal." They believed that their living in the heart of impoverished immigrant communities would help to solve many of the problems that plagued modern industrial cities, such as disease, alcoholism, prostitution, overcrowding, and harsh working conditions. Many settlement workers were guided by a religious call to service and a quest to fulfill their professional ambitions in an era of restricted choices for women. Settlement workers were optimistic that a blend of residence, research, and reform would offset the major social ills of the modern age.

As part of the era's child-saving movement, social settlement workers appealed to public sympathies by raising concerns about the care and the protection of children. Their responses to the perceived needs of immigrant children and youth ranged from direct neighborhood services to national policy reforms. A typical social settlement provided an array of direct services for young people, such as nurseries, day care, after-school clubs, creative activities, and educational programs. The settlements organized neighborhood activities that emphasized culture and socialization for immigrant youth. Some historians, such as Elizabeth Lasch-Quinn and Anthony Platt, characterize the settlements as seeking to assimilate immigrant youths; others, such as Allen Davis and William Trattner, suggest that the settlements tried to respect and preserve the traditions of immigrant cultures.

The settlement workers had great faith in the promise of fashionable social science techniques. They learned sociological methods such as survey research and carefully crafted numerous studies of urban social problems. Armed with an array of facts and information, they used their data to advocate for progressive policy reforms, such as protective labor legislation for women and children. In some cases their reform efforts led to local improvements; in others, to state and federal workplace legislation.

In addition to advocating for protective child labor legislation, settlement workers regarded public education for all children as the key to social and human progress. They orchestrated several important and long-lasting education initiatives that enriched and expanded the role of public schools in the lives of children and families. These reforms included playgrounds, kindergartens, nursery schools, and school public health and social work services. They also strove to pass compulsory education laws in several U.S. states.

Settlement workers are also well known for their work in juvenile courts and probation services. Hull-House pioneers Julia Lathrop, Jane Addams, and Grace Abbott helped to establish the first juvenile court in Cook County, Illinois, in 1899. By 1928, all but two states had institutionalized separate judicial systems to contend with cases of juvenile delinquency and dependency. Juvenile courts suspended jury trials for children, created separate facilities for incarcerated youth, and developed juvenile probation systems. Although rife with inconsistencies and flaws, the establishment of a separate justice system for children was considered great social progress compared to prior treatment of delinquency and dependency.

Several social settlement women, mainly from Chicago's Hull-House, rose to prominent national leadership positions dealing with public policy issues concerning children and families. Florence Kelly, who resided at both Addams's Hull-House and Lillian Wald's Henry Street Settlement, was appointed secretary of the National Consumers' League and organized the National Child Laborommittee in 1904. Kelly, along with Julia Lathrop and Grace Abbott, all Hull-House residents, organized the first White HouseConference on Children in 1909. In 1912, President Taft appointed Lathrop as the first chief of the U.S. Children's Bureau. Among other major accomplishments, the Children's Bureau played a key role in crafting sweeping national public welfare reforms for children and families such as Mothers' Pensions and the Sheppard-Towner Maternity and Infancy Act.

While the settlement movement unequivocally pushed a progressive children's agenda, its legacy concerning race is less obvious. Some of the settlement leaders were involved in civil rights groups and even helped to found the National Association for the Advancement of Colored People (NAACP). However, historians such as Lasch-Quinn argue that the settlements largely ignored the poverty and race discrimination that haunted African Americans. They did not serve African-American families, nor did they work in concert with African-American reformers, who more often than not organized separate settlement houses. Social reformers such as Janie Porter Barrett and Birdye Henrietta Haynes founded settlements that focused on direct services, "moral uplift," and civil rights work. For African Americans, civil rights were intertwined with solving the problems of the poor.

Many current social welfare policies and services for children and youth can be traced back to the ideas and activities of the social settlements. Several settlement house buildings still exist in the form of neighborhood or family resource centers. These centers continue to provide after-school and other neighborhood activities for children, youth, and families. Moreover, the framework for the late-twentieth-and early-twenty-first-century U.S. child welfare system is based on the premise of "best interest of the child," an idea that emerged from this movement. Finally, the social settlements movement left enduring notions of children as a protected class of citizens and of a public responsibility to provide children with education, separate institutions, and the promise of quality life opportunities.

Katz, Michael B. 1986. In the Shadow of the Poorhouse: A Social History of Welfare in America. New York: Basic Books.

Trolander, Judith A. 1987. Professionalism and Social Change: From the Settlement House Movement to Neighborhood Centers, 1886 to the Present. New York: Columbia University Press.

Encyclopedia of Children and Childhood in History and Society ABRAMS, LAURA S.

Jutes , Jutes Jutes. Bede's account of the Jutes is highly specific—that they were a Germanic people who inhabited a region north of the Angles and that thei… Skara Brae , Skara Brae a late Neolithic (3rd millennium bc) settlement on Mainland in the Orkney Islands, overwhelmed by a sand dune and first uncovered by a sto… Robert Archey Woods , Robert Archey Woods (1865-1925), American social worker, founded South End House, the first settlement house in Boston. His pioneer surveys of ethnic… Edith Abbott , Edith Abbott (1876–1957) American social reformer, author, and educator, dedicated her life to improving the social welfare of workers, immigrants, c… Abraham Isaac Kook , Gush Emunim GUSH EMUNIM ("The Bloc of the Faithful"), a spiritual-political movement established for the purpose of implementing its belief that the… Reform , Throughout the fifty-year span from 1870 to 1920, American authors sought increasingly to link their writing to the mission of social reform. For man…