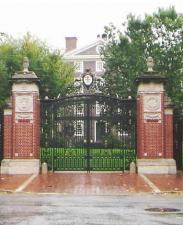 BROWN UNIVERSITY, the seventh oldest institution of higher learning in the United States, was founded in 1764 in Warren, Rhode Island, as Rhode Island College. Established by Baptist clergy, the college set forth a liberal outlook in its charter, emphasizing non-sectarian principles in admissions policy and curricula. The college opened in 1765 and held its first commencement ceremony four years later, under its first president, James Manning. In 1770 the school relocated to its present campus in Providence, Rhode Island. During the American Revolution the college closed, and its University Hall became a barracks and hospital for American and French troops.

In 1804 the college was renamed Brown University in honor of Nicholas Brown, a generous benefactor. Francis Wayland, chosen as Brown's fourth president in 1827, introduced electives and a new curriculum emphasizing applied science and engineering. The university introduced intercollegiate sports after the Civil War; it awarded its first master of arts degree in 1888, followed in 1889 by its first Ph.D. degree. Under the administration of Elisha Benjamin Andrews, chosen as Brown's eighth president in 1889, nine new academic departments were created, and undergraduate enrollment and faculty size greatly increased. In 1891 Pembroke College, a coordinate undergraduate school for women, was established. During William Herbert Perry Faunce's presidency (1899–1929) the university enlarged its curriculum, inaugurated honors programs, and formally established the graduate school.

Henry Merritt Wriston, university president from 1937 to 1955, raised Brown's status from that of a regional school to that of one of the outstanding universities of the United States. Wriston brought in many outstanding faculty members, instituted important changes in the curriculum, and made the college more residential.

Like many other universities, in the late 1960s Brown found itself swept up in student activism. When Ray L. Heffner became president in 1966, he became embroiled in controversies over the university's in loco parentis policies, the role of minorities at the school, the presence of a Reserve Officers' Training Corps (ROTC) program on campus, the dearth of tenured female faculty members, and calls for curricular reform. After a tumultuous tenure, Heffner resigned in 1969. Shortly thereafter, the faculty adopted the liberal "New Curriculum," which eliminated "core" courses and distribution requirements, made letter grades optional, and encouraged cross-disciplinary study.

When Donald F. Hornig succeeded Heffner in 1970, he too faced a number of contentious issues and challenging changes: the absorption of Pembroke College in 1971, the establishment of a medical school in 1972, and an operating deficit exceeding$4 million. Hornig's austerity plan raised hackles but shored up the school's finances before he stepped down in 1976.

During the presidencies of Howard R. Swearer (1977–1988) and Vartan Gregorian (1989–1997), Brown became one of the nation's truly elite universities. Two capital drives (1979–1984 and 1993–1998) pushed the school's endowment over $800 million, enabling it to create new programs and institutes, offer better financial aid packages, and improve its facilities. Brown became a "hot" school in the early 1980s, its applications rising quickly, and in 1987 it was ranked among the top ten U.S. universities in U.S. News & World Report. After E. Gordon Gee's brief presidency (1998–2000), Brown named Ruth J. Simmons to the position, making her the first African American president of an Ivy League university.