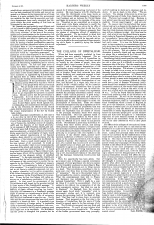 BIMETALLISM. In 1791, most of the world's leading nations were on a bimetallic standard in which both gold and silver served as the basis for coinage (known as "specie"). Following the recommendations of Alexander Hamilton and Thomas Jefferson, the U.S. Congress passed the Coinage Act of 1792, in which a gold eagle ($10) gold piece of 247.50 grains, 100 percent fine, a silver dollar of 371.25 grains, and subsidiary silver coins including half-dollars, quarters, and dimes of proportional weight became the money standard for the new nation.

The American silver dollar circulated at face ("par") value in Latin America even though it weighed less than the Latin American dollar. Consequently most of the coins that were minted were exported and did not circulate internally to any significant extent. In 1806, President Jefferson suspended the coinage of silver dollars.

The mint ratio of silver to gold (15 to 1) undervalued gold. An owner of gold could sell it to the mint at the government-set price of $19.40 per ounce, but in the market, where prices were set by supply and demand, the same owner could obtain nearly $20 per ounce. The undervalued metal in a dual system such as this tends to cease circulation once the disparity between the mint and market ratios becomes large enough to yield a profit after transaction costs are paid—a phenomenon known to economists as "Gresham's law" ("good money drives out bad"). Until the Napoleonic wars, the disparity between the prices in gold and silver still did not grow far enough to induce many people to take advantage of the price differential (a process known as "arbitrage"). But in 1821, England adopted the gold standard, which raised the demand for gold and raised its price beyond the level needed to initiate Gresham's law. Gold all but disappeared from circulation.

By the early 1820s, many proposals were made to devalue gold, but the scarcity of the metal argued against devaluation. After gold was discovered in the Appalachians, however, Congress in 1834 reduced the gold content of the eagle to 232 grains. Three years later, the weight was increased to 232.2 grains, making the mint ratio of silver to gold 15.988 to 1. Gold was overvalued at the mint, but it took until 1844 for all the silver coins to disappear from circulation. To bring back silver for daily transactions, Congress in 1853 reduced the half-dollar from 206.25 grains, 90 percent fine, to 192 grains, and reduced other coins proportionately.

Civil War inflation drove all specie out of circulation. The country was on an irredeemable paper standard from 1861 to 1879. In light of the fact that the silver dollar had not circulated for thirty years, the coinage laws were re-written: the act of February 1873 dropped the silver dollar and made the gold dollar the monetary standard, evoking a howl of protest from agrarian groups and miners who wanted to inflate the currency. They referred to this as the "Crime of '73."

A series of events in the early 1870s reduced the demand for silver. In 1871–1873, Germany went on the gold standard, demonetizing silver; several Latin American countries closed their silver coinage production; Scandinavia adopted the gold standard; and Russia, in 1876, suspended its silver coinage. Meanwhile, new discoveries of silver in Nevada, combined with the continued productivity of the Comstock Lode, increased U.S. silver production by about 20 percent.

The price of silver fell sharply, and, combined with a worldwide gradual deflation, many Americans saw the declining price levels as a conspiracy or plot by lenders to maintain deflation. "Silverites" (who began to meld into the newly forming Populist Party) clamored for "free and unlimited silver at 16 to 1." In 1878, pressure from silver interests led to passage of the Bland-Allison Act, which required the U.S. Treasury to purchase $2.5 million worth of silver every month for coinage into silver dollars at the rate of 412.5 ounces, 90 percent fine. The catch was that the Treasury was to pay market prices, not "16 to 1." Thus the anticipated inflation that would have ensued had the silverites' program been adhered to did not materialize.

Silver forces relentlessly pressed their program. In June 1890, Congress passed the Sherman Silver Purchase Act, which required the purchase of 4.5 million ounces of silver per month at slightly higher than market prices of approximately 16.5 to 1. This had the disastrous effect of draining gold out of the country at precipitous rates. By the time Grover Cleveland was reelected president in 1892, the nation teetered on the edge of bankruptcy. Congress repealed the act in November 1893, but not in time to stop the panic of 1893. Worse, the gold drain on the government's vaults had continued: in 1892 the government had $84 million in gold, but by 1894 the reserves had fallen to $69 million and continued to drop. Finally Cleveland worked with the banker J. P. Morgan to arrange a massive syndicate to lend the U.S. government gold totaling more than $65 million, which stabilized the markets. In 1896, the bimetallism issue was politically ended with the election of the Republican William McKinley, who favored a gold standard, over the Democratic silverite William Jennings Bryan, who had won the nomination with his famous Cross of Gold Speech.

The Great Depression brought new calls to add silver back to the monetary mix. On 5 April 1933, President Franklin D. Roosevelt suspended the gold standard. The Thomas Amendment to the Agricultural Adjustment Act (May 1933) authorized the president to devalue the gold dollar up to 50 percent, accept up to $200 million in silver at 50 cents an ounce in payment for war debts, and to restore bimetallism. By the Gold Reserve Act of January 1934, the weight of the gold dollar was reduced from 23.22 to 13.71 grains, making gold worth $35 an ounce instead of $20.67. The government also bought more domestically mined silver during the depression.

During the 1960s, the United States abandoned all but the symbolism of a metallic standard. In acts of 1965 and 1968, Congress eliminated the gold reserve requirement for Federal Reserve bank deposits and Federal Reserve notes. In 1965 the government quit minting standard silver coins and in 1971 temporarily suspended the right to convert dollars into gold. In 1972, the dollar was devalued, raising the price of gold to $38 per ounce; a year later, the dollar was devalued again, forcing the price up to $42. It was hopeless for the government to try to peg the price of the dollar to gold, or vice versa, and soon the dollar (as did all currencies) "floated" against the value of gold and all other currencies. During the oil crisis of the mid-1970s, the market gold price soared to as much as $900 an ounce, although once oil prices stabilized, the price of gold fell back to around $300, where (with a few exceptions) it has remained.

Devaluation , DEVALUATION, a downward adjustment of the price of a currency in terms of other currencies, in a system in which each currency has a gold par value.… Silver Nitrate , OVERVIEW Silver nitrate (SILL-ver NYE-trate) is a colorless to transparent to white crystalline solid with no odor and a bitter metallic taste. In pu… Damascening , Damascene-work. Designs incised into metal and filled with gold, silver, or copper, often of the arabesque type. Ruble , Ruble The basic unit of Russian currency. The term ruble (rubl' ) emerged in thirteenth-century Novgorod, where it referred to half of a grivna. The… Ormolu , or·mo·lu / ˈôrməˌloō/ • n. a gold-colored alloy of copper, zinc, and sometimes tin, cast into desired shapes and often gilded, used esp. in the 18th… Resumption Act Of 1875 , Passed by Congress in 1873, the Gold Resumption Act officially revoked the bimetallic standard that was adopted by the U.S. government in 1792. The l…